FOXBOROUGH, Mass. - A steady crowd of people flowed into the New England Patriots' stadium for their second dose of the COVID-19 vaccine this week in Massachusetts, which is nearing its goal of vaccinating more than 4 million and plans to close its biggest clinics in little more than a month.

In the Deep South, meanwhile, one of the largest clinics in Alabama shut down Wednesday and others will follow in the coming weeks because demand for the shot has plunged.

"They didn’t have long enough to test it," said James Martin, 68, explaining why he has no plans to get the vaccine as he stopped for cigarettes at a convenience store in Clanton, Alabama. "They don’t know what the long-term effect is. That’s what makes me skeptical."

A month after every adult in the U.S. became eligible for the vaccine, a distinct geographic pattern has emerged: The highest vaccination rates are concentrated in the Northeast, while the lowest ones are mostly in the South. 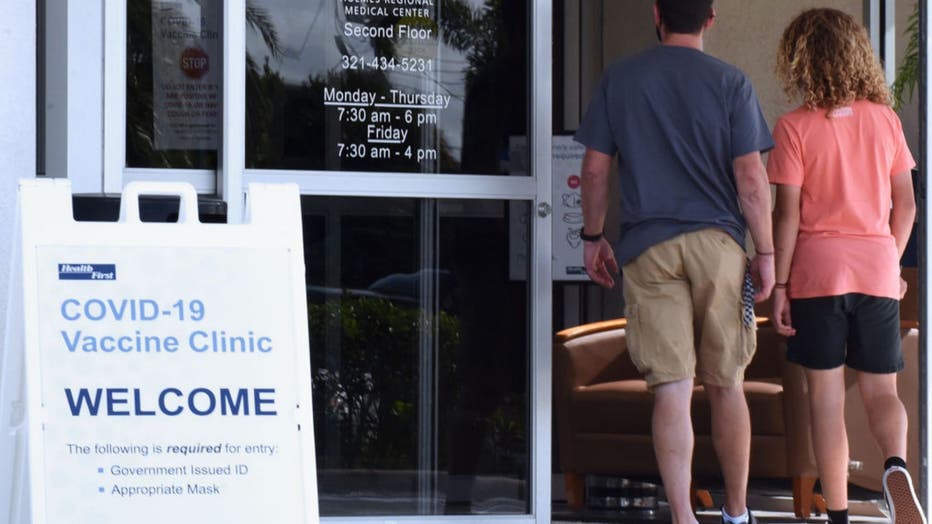 Experts say the gap reflects a multitude of factors, including political leanings, religious beliefs, and education and income levels.

Close to 160 million Americans -- 48% of the population -- have received at least one dose of a COVID-19 vaccine, and 125 million are fully vaccinated against the virus.

New England and Northeastern states account for eight of the top 10 in vaccination rates, with Vermont No. 1 as of last Friday, according to the Centers for Disease Control and Prevention. Nearly 64% of its population has received as least one dose.

Following right behind are Massachusetts, Hawaii, New Hampshire, Maine, Connecticut, Rhode Island, New Jersey, Pennsylvania and New Mexico, all of them at 54% or higher.

RELATED: 60% of US adults have received at least 1 dose of COVID-19 vaccine, CDC says

Eight Southern states are in the bottom 10, all of which are under 40%. Mississippi was dead last at 32%, followed by Louisiana, Alabama, Wyoming, Idaho, Tennessee, Arkansas, Georgia, West Virginia and South Carolina.

Closing the gaps is vital to controlling the virus that has killed 588,000 people in the U.S., health experts say. The vaccination drive has helped drive U.S. cases down to their lowest level since last June, at around 30,000 a day on average, and reduced deaths to about 570 a day, a level not seen since last July.

"Low vaccination rates will leave room for the virus to circulate, re-emerge and possibly form new variants," said Tara Kirk Sell, a senior scholar at the Johns Hopkins Center for Health Security. "High vaccination rates are critical to keeping the disease under control, especially when we get back to the fall and winter."

The divides aren’t just limited to states — there are marked differences between urban and rural places, from county to county and from one neighborhood to another.

The disparities are even more glaring when looking at individual places around the U.S.: Vermont has four counties where 75% of the residents have had at least one dose, while there are 11 Mississippi counties with under 25% vaccinated.

Roddy Carroll has seen both sides from where he works in technology sales in Atlanta and where he grew up in northern Georgia. "There’s a pretty stark difference," he said.

Back home in rural Murray County, only 1 in 4 residents have rolled up their sleeves for a shot. Carroll blames conservative politicians for sowing doubts that have made people reluctant.

"They're more willing to listen to conspiracy theorists than doctors who know how vaccines work," he said. "You're talking about people you’ve known all their life. But you hear them say those things, and you think, `How well did I know them?'"

Those anti-vaccine beliefs have led to some uncomfortable conversations with his family, Carroll said. "I don’t know anybody who hasn’t had tense moments like that," he said.

Dr. Eric Topol, head of the Scripps Research Translational Institute, said the gaps in COVID-19 vaccination can be traced directly to political influences, particularly what he called "anti-science" attitudes among Republican leaders, who were skeptical about the value of masks, too.

He expects U.S. regulators to grant full approval to the vaccines soon, which will give employers, the military and health systems the green light to require vaccination. "That will make the biggest difference," Topol said.

Gail Borel, of Plymouth, Massachusetts, a nurse who arrived with her husband at Gillette Stadium on Wednesday to get their second doses, said she was initially reluctant. But she said she decided to go through with it after her employer said she could be held liable if she refused the vaccine and got patients sick.

In Massachusetts, where 62% have had at least one dose, there has been little resistance to public health orders during the pandemic, and state leaders have kept tight restrictions on gatherings and businesses, drawing praise from officials such Dr. Anthony Fauci, the nation’s top infectious disease expert.

Some credit the success to the state’s deep ties to education and health care. The Boston area alone has dozens of universities, including Harvard and MIT, and scores of biotechnology companies, including the vaccine maker Moderna.

Nationwide, rural counties are behind urban places in their COVID-19 vaccination efforts — 39% of adults in rural counties had received at least one shot compared with 46% in urban counties as of April 10, according to an analysis released Tuesday by the CDC.

The rural-urban gap exists among women, men and both younger and older adults, the CDC said.

In Alabama's Chilton County, a peach-farming area, the longtime mayor of Clanton died of the virus last year along with 85 others in the county. Yet less than 17% of its population is fully vaccinated, giving it one of the lowest rates in the state.

Store clerk Kim Pierce said she isn’t getting a shot despite knowing as many as 30 people who developed COVID-19 and two who died. Besides, Pierce said, she hasn’t gotten sick despite not wearing a mask and working in a busy gas station just off Interstate 65.

"Basically I think it’s just scamming. I don’t think it’s any worse than the flu," she said.

"We are from Alabama and we are in the country, so these older folks don’t believe in COVID-19," she said.

Calhoun got sick and lost her sense of taste and smell in the fall, forcing her to quarantine for two weeks. She is among the unvaccinated, but she might get a shot before going to college in the fall.

"I just haven’t had time to stop by and get it," she said.