President Joe Biden traveled to the tornado-ravaged state of Kentucky to survey damage from last week’s deadly storms and offer federal support for the victims. During his remarks, he authorized the government to cover 100 percent of the state’s costs for the first 30 days for all emergency work and services related to the devastation.

President Joe Biden on Wednesday traveled to the tornado-ravaged state of Kentucky to survey damage from last week’s deadly storms and offer federal support for the victims.

More than 30 tornadoes tore through Kentucky and four other states over the weekend, killing at least 88 people — 74 of them in Kentucky — and leaving many others still unaccounted for. The storms demolished homes, downed power lines and cut off residents from key utilities as temperatures dropped below freezing in Kentucky earlier this week.

Biden visited Fort Campbell for a storm briefing and Mayfield and Dawson Springs to survey the damage, followed by remarks.

"The scope and scale of this destruction is almost beyond belief," Biden said during his remarks. "These tornadoes devoured everything in their path."

Biden authorized the government to cover 100% of the state’s costs for the first 30 days for all emergency work and services related to the devastation in Kentucky.

"I’m going to make sure the federal government steps up and makes sure we do every, single thing," Biden continued.

At the state’s request, the president said four FEMA search and rescue teams were working in Kentucky, and the agency has provided critical supplies including 61 generators, drinking water, housing and meals. 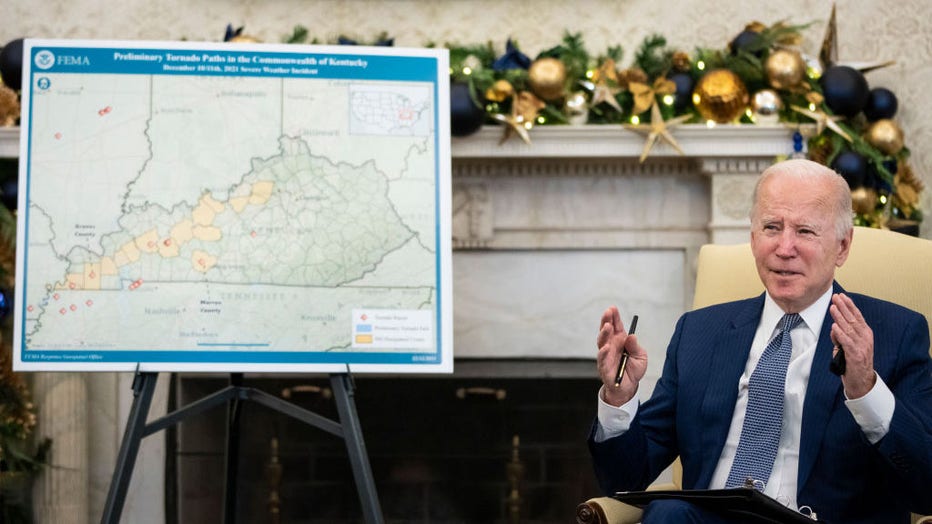 WASHINGTON, DC - DECEMBER 13: President Joe Biden speaks during a briefing about the recent tornadoes in the Midwest in the Oval Office of the White House on Dec. 13, 2021, in Washington, D.C. (Photo by Drew Angerer/Getty Images)

This is the president’s fifth time visiting an area ravaged by natural disasters since taking office. The year has been marked by a notable uptick in extreme weather occurrences driven primarily by climate change.

Only a month after Biden was sworn into office, he went to Houston to survey the damage wrought by last winter's historic storm there. He traveled to Idaho, Colorado and California to survey wildfire damage over the summer, as well as Louisiana, New Jersey and New York earlier this fall after Hurricane Ida tore through the region.

The disasters have offered Biden urgent and visceral evidence of what he says is the dire need for America to do more to combat climate change and prepare for future disasters — a case he made to help push for passage of his spending proposals.

The $1 trillion infrastructure bill, signed into law last month, includes billions for climate resilience projects aimed to better defend people and property from future storms, wildfires and other natural disasters. His proposed $2 trillion social spending package, still pending in Congress, includes billions more to help shift the nation away from oil, gas and coal and toward widespread clean energy and electric vehicle use.

But on Wednesday, Biden’s focus is squarely on Kentucky. Five twisters hit the state, including one with an extraordinarily long path of about 200 miles, authorities said.

Jordan Baize plays the piano while surrounded by the destroyed home following a tornado in Bremen, Kentucky. Credit: Whitney Brown

In addition to the deaths in Kentucky, the tornadoes also killed at least six people in Illinois, where the Amazon distribution center in Edwardsville was hit; four in Tennessee; two in Arkansas, where a nursing home was destroyed and the governor said workers shielded residents with their own bodies; and two in Missouri.

A fund set up by the state of Kentucky had collected $6 million in donations, the governor said earlier this week. Kentucky First Lady Britainy Beshear launched a Christmas toy drive for children affected by the storm. She is asking for unwrapped toys, books, and gift cards of $25 that will be distributed to families in need.

The president also signed two federal disaster declarations for Kentucky over the weekend, providing federal aid for search and rescue and cleanup operations, as well as aid for temporary housing and to help individuals and businesses recover.

Biden said earlier this week during a White House briefing on the tragedy with Department of Homeland Security Secretary Alejandro Mayorkas and other top emergency response officials that the federal government is committed to providing whatever the affected states need in the aftermath of the storm.