"Folks, we got to listen to the scientists and the economists and the national security experts, they all tell us this is ‘code red,’ the nation and the world are in peril," Biden said during a news conference in Queens, New York. "That’s not hyperbole. That is a fact."

Biden traveled to the Northeast on Tuesday to survey storm damage from remnants of Hurricane Ida, which dropped record rainfall on the region and caused catastrophic flash flooding.

"People are beginning to realize this is much, much bigger than anyone was willing to believe," Biden added. "Even the climate skeptics are seeing that this really does matter."

"Climate change poses an existential threat to our lives, to our economy," he continued. "The question is can it get worse?"

Biden’s aim to fight climate change is part of his larger infrastructure plan known as the "Build Back Better" agenda, which also calls for more jobs, easier access to health care and tax cuts.

In regard to climate change, Biden said he wants to work with the other world leaders to end emissions by 2050.

"We’re going to continue to shout as long as it takes to get real progress here," he added. "We are determined that we’re going to deal with climate change."

Biden's plan to spend $1 trillion on infrastructure nationwide is currently pending in Congress. At the same time, House and Senate Democrats hope to pass a larger $3.5 trillion, 10-year cascade budget this fall — $198 billion of that money will go to the Energy Committee to help with climate research.

"I’m hoping to be able to see the things we are going to be able to fix permanently with the bill that we have in for infrastructure," Biden said as he left the White House, when asked what he hoped to see on the tour. 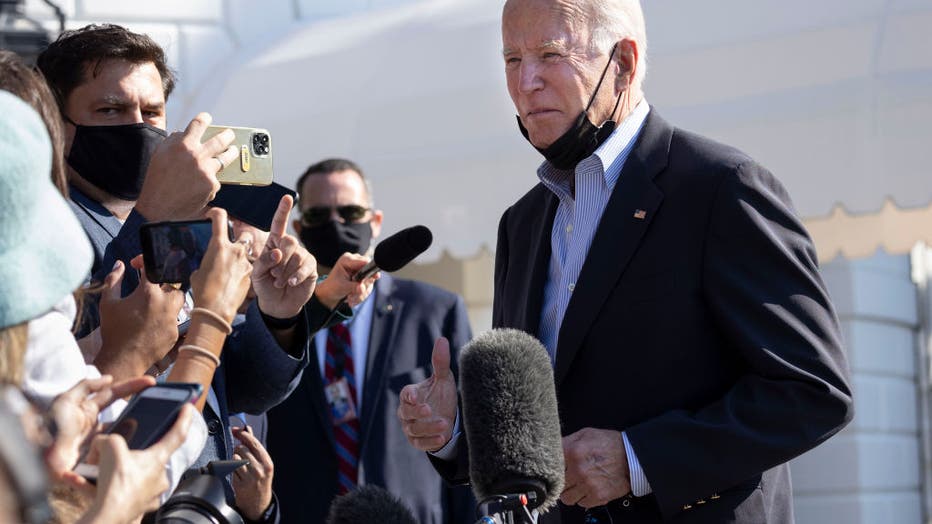 WASHINGTON, DC - SEPTEMBER 07: U.S. President Joe Biden speaks to the media as he departs the White House on September 07, 2021 in Washington, DC. Biden is traveling to New Jersey and New York to tour storm damage from Hurricane Ida. (Photo by Kevin

New Jersey was Biden's first stop. Gov. Phil Murphy greeted him as he arrived in Somerset County for a briefing at the emergency management training center before the tour of Manville.

At least 50 people were killed across six states after rain overwhelmed rivers and sewer systems last week. More than half of those deaths, 27, were recorded in New Jersey. In New York City, 13 people were killed, including 11 in Queens.

Some people were trapped in fast-filling basement apartments and cars or were swept away as they tried to escape. A family’s home security camera in New Jersey captured the basement wall buckling under the force of floodwaters, trapping a teenager and his mother inside. Both were later pulled to safety.

Manville, situated along New Jersey's Raritan River, is almost always hard-hit by major storms. It was the scene of catastrophic flooding in 1998 as the remnants of Tropical Storm Floyd swept over New Jersey. It also sustained serious flooding during the aftermath of Hurricane Irene in 2011 and Superstorm Sandy in 2012.

RELATED: Ida vs. Katrina: How do they compare?

After storm Ida caused deadly and historic flooding across the northeast, The NYPD released video showing some of the attempts made by officers to reach a flooded basement apartment in Woodside, Queens, where three people – a toddler and two adults – died from drowning. We also hear from a NY mother who had to be rescued by boat with her daughter as floodwater's quickly rose throughout her entire home.

Murphy said he would speak with Biden on Tuesday about adding other New Jersey counties to the disaster declaration.

"The major disaster declaration means individuals are now eligible for money in those counties," Murphy said Monday. "Before you ask it, there are 15 other counties in New Jersey and we're in there fighting for it."

Biden’s visit follows a trip to Louisiana on Friday, where Hurricane Ida first made landfall on Aug. 29 as the fifth most powerful storm to hit the United States. The storm knocked out power for more than one million people across the region, and at least 13 were killed.

RELATED: NYC flooding: What caused the sudden, severe deluge in the Northeast?

Biden on Friday used his appearance in Louisiana to pitch his plan, pending in Congress, to spend $1 trillion on modernizing roads, bridges, sewers and drainage systems, and other infrastructure to make them better able to withstand the blows from more and more powerful storms.

"Hurricane Ida is another reminder that we need to be prepared for the next hurricane and superstorms that are going to come, and they’re going to come more frequently and more ferociously," Biden said Friday in a hard-hit residential neighborhood in LaPlace.

The president’s trip to the Northeast also comes ahead of the 20th anniversary of the Sept. 11 attacks. Biden will visit all three memorial sites on Saturday and pay his respects to the nearly 3,000 people killed.