"The United States government is putting our money where our mouth is," he said.

Biden said the spending, part of broader economic legislation he signed into law this year, will "change the paradigm" and ensure the U.S. hits its target for reducing emissions by 2030. 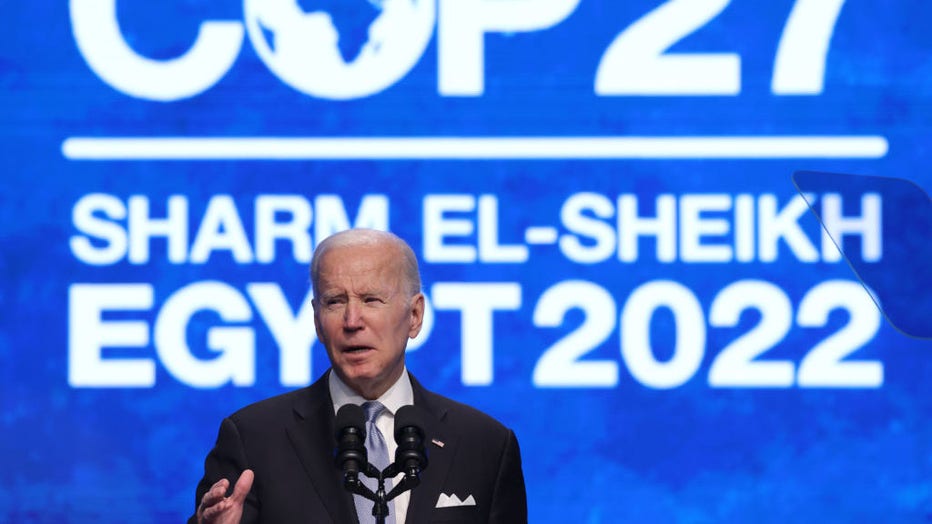 His attendance at the U.N. climate conference, known as COP27, in the resort town of Sharm el-Sheikh is the first stop on an around-the-world trip that will also take him to a meeting of Southeast Asian leaders in Cambodia and a Group of 20 summit meeting for leaders of the world’s largest economies in Bali, Indonesia.

Biden boarded Air Force One late Thursday buoyed by a stronger-than-expected showing by the Democratic Party in Tuesday's midterm elections, congressional passage this year of the largest climate investment in U.S. history, and Russian military setbacks on the Ukrainian battlefield. 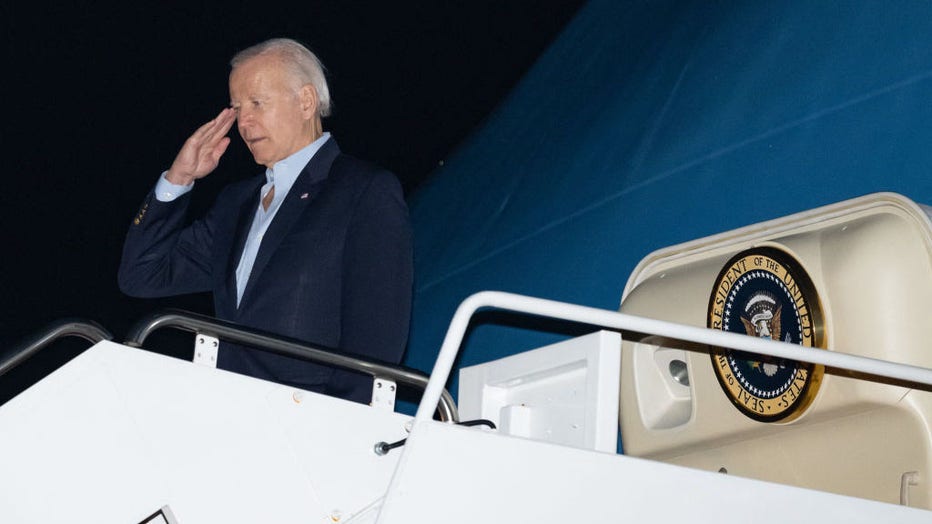 U.S. President Joe Biden salutes as he boards Air Force One at Joint Base Andrews in Maryland on Nov. 10, 2022. (Photo by SAUL LOEB/AFP via Getty Images)

At the climate conference, Biden discussed a new supplemental rule that will crack down on methane emissions, expanding on a similar regulation his administration released last year. Methane is a potent greenhouse gas that contributes significantly to global warming.

The U.S. commitment of some $375 billion over a decade to fight climate change gives Biden greater leverage to press other nations to fulfill their pledges to reduce greenhouse gas emissions and shift the global economy toward cleaner energy sources.

Biden will be in a far different position from last year’s gathering, which came about during a particularly unhappy stretch in the bill’s tortuous path to passage.

That summit resulted in additional global commitments to meet the temperature targets agreed to in the Paris Climate Accord, which Biden rejoined after his predecessor, Donald Trump, pulled the U.S. from the deal.

Paris Climate Agreement: What it is, how it started and what happens now that the US has rejoined

"It’s a very good sign that President Biden is coming to this COP (summit)," said German special envoy Jennifer Morgan. "I think it reassures countries, people that the United States at the highest level takes this issue incredibly seriously. And we need that. "

Others were not as optimistic.

"Joe Biden comes to COP27 and makes new promises but his old promises have not even been fulfilled," Mohamed Adow, a veteran climate analyst and director of Power Shift Africa, said in an email. "He is like a salesman selling goods with endless small print."

Biden also argued that "good climate policy is good economic policy," and call on all major emitting countries to "align their ambition" to the international goal of trying to limit future global warming to 1.5 degrees Celsius (2.7 degrees Fahrenheit), according to the White House.

But even with these fresh efforts, America and the world have a long way to go to meet emissions targets that scientists hope will contain global warming. And the political will for more investment is shrinking.

President Joe Biden convened a virtual meeting of some of the world’s largest economies to discuss the next steps on climate change on June 17, 2022.

It remained to be seen whether Biden would address the item top of mind at the climate talks: loss and damage. That’s international negotiations language for asking rich countries like the United States, the top historic polluting nation, to pay what are essentially reparations for damages caused to poorer vulnerable nations that don’t emit much heat-trapping carbon dioxide.

The U.S. in the past has opposed even talking about the issue, but has softened its stance and has agreed to discussions. Biden's climate envoy, John Kerry, has mentioned the issue in speeches. However, the U.S. doesn’t want liability to be part of any deal and when it comes to paying, Congress and the public have been reluctant to embrace many types of climate aid — and this is the most controversial type.

Global eagerness for shifting away from fossil fuels has been tempered by the roiling of world energy markets after Russia’s invasion of Ukraine. At home and abroad, Biden is pressing oil and gas producers to boost production to meet demand and bring down prices that have funded the Kremlin’s war effort.

Prospects for a significant breakthrough are further dampened as major emitters such as China and India are sending less-senior delegations to the conference. Biden administration officials have tried to lower expectations for results and instead cast the meeting as a return to U.S. leadership on the issue.

RELATED: Why historically low Mississippi River water levels may affect what you pay at the grocery store

Biden leaves Washington with votes still being tallied in key races that will determine control of both chambers of Congress. Still, the president was buoyed as Democrats performed stronger than expected. He was likely to learn the results of the races that will sharply impact his ability to get things done in Washington while he was overseas.

Meanwhile, Trump appeared set to announce another bid for the White House while Biden was in Asia, a contrast the incumbent’s advisers felt would only benefit Biden.

White House aides said in advance of the visit that Biden would broach the topic of human rights with El-Sisi, whose government has taken an authoritarian turn. The Egyptian leader proactively raised the topic with Biden before their one-on-one meeting.

"We are very keen on improving this part," said El-Sisi, who emphasized that Egypt had launched a national strategy on human rights. Biden and other senior officials had also planned to advocate for the release of imprisoned Egyptian pro-democracy activist Alaa Abdel-Fattah, whose family said they were told by prison officials he was undergoing an undefined medical intervention amid a hunger strike that escalated Sunday.

How insurers are looking at climate change

Jerome Haegeli, Swiss Re's group chief economist who analyzes economic and insurance market research, shares how the sector is looking at the risks of climate change.

For his part, Biden said the two nations are "continuing our dialogue on human rights" and added that he hopes they'll be "closer, stronger in every way."

After the brief stop in Egypt, Biden will continue on to Cambodia for a summit of the Association of Southeast Asian Nations to reinforce the U.S. commitment to the region in the face of China's increasing assertiveness.

Biden had said he intended to discuss with Xi growing tensions between Washington and Beijing over the self-ruled island of Taiwan, trade policies, Beijing’s relationship with Russia and more.

Biden will also aim to demonstrate global resolve to stand up to Russia over its invasion of Ukraine and meet with two critical new partners in the effort to support Ukraine’s defense: British Prime Minister Rishi Sunak and Italian Premier Giorgia Meloni.

Russian President Vladimir Putin announced Thursday that he was skipping the gatherings, averting a potentially awkward encounter. Sullivan said Biden had no plans to interact with Russian Foreign Minister Sergey Lavrov, who is attending in Putin's stead.