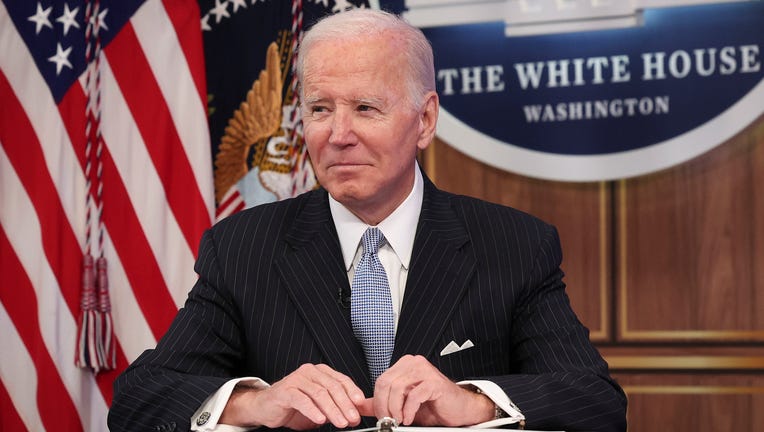 U.S. President Joe Biden looks toward reporters as they shout questions during an event with business and labor leaders at the White House complex November 18, 2022 in Washington, DC. (Photo by Win McNamee/Getty Images)

WASHINGTON - People in their 80s lead countries, create majestic art and perform feats of endurance, one even scaling Mount Everest. It's soon time for President Joe Biden, 80 on Sunday, to decide whether he has one more mountain to climb — the one to a second term.

Questions swirl now about whether he's got what it takes to go for the summit again.

The oldest president in U.S. history, Biden hits his milestone birthday at a crossroads, as he and his family face a decision in the coming months on whether he should announce for reelection.

Biden aides and allies say he intends to run. Yet the president himself can sound equivocal. "My intention is that I run again," he said at a news conference this month. "But I’m a great respecter of fate."

"We're going to have discussions about it," he said. Aides expect those conversations to pick up over the holidays, with no decision until 2023.

What would a Trump/Biden rematch look like in 2024? Former Republican congressman, Ric Keller, says it would be "a bunch of old guys," adding most people their age "are playing shuffleboard... not running the world." Keller spoke with LiveNOW from FOX's Josh Breslow about the announcement.

To observe Biden at work is to see a leader tap a storehouse of knowledge built up over a half century in public office as he draws on deep personal relationships at home and abroad, his mastery of policy and his familiarity with how Washington works. In short, the wisdom of the aged.

But to observe Biden is also to see him walk now often with a halting gait.

It is to see him take a pass on a formal dinner with other leaders without a real explanation, as happened on his trip abroad this past week. Some supporters wince when he speaks, hoping he gets through his remarks OK.

READ MORE: Pelosi to step down from Democratic leadership, will continue serving in Congress

House Speaker Nancy Pelosi's decision, at age 82, to pull back from leadership and let a new generation rise may spill over into Biden's thinking and that of his party as Democrats weigh whether they want to go with a proven winner or turn to the energy of youth.

Among the questions Pelosi's move raises, said Kathleen Hall Jamieson, an authority on political communications at the University of Pennsylvania: "Even if one is highly competent and successful, is there a point at which one should step aside to give others the opportunity to lead?" 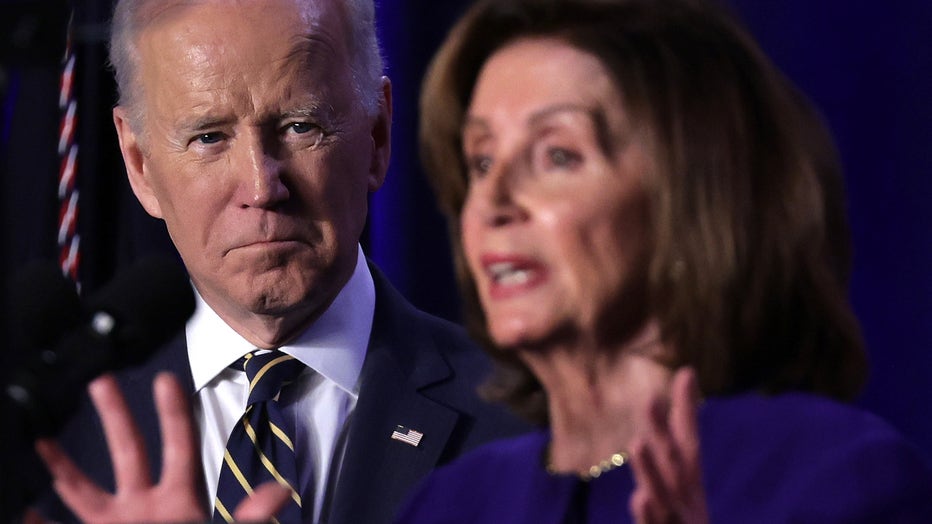 She said: "Pelosi’s decision makes such questions more salient in the context of Biden’s 2020 statement that he was the bridge to a new generation of leaders."

Biden’s verbal flubs have been the stuff of legend throughout his five-decade political career, so sussing out the impact of age on his acuity is a game for "armchair gerontologists," as Dr. S. Jay Olshansky, an aging expert, puts it.

In the distorted mirrors of social media commentary, every slip is magnified into supposed proof of senility. A moment of silent reflection by Biden is presented as the president nodding off.

Yet some allies see Biden's blunders as an increasing vulnerability as he's grown older.

READ MORE: Biden urges voters to save American democracy from lies and violence

In an AP VoteCast survey of the electorate this month, fully 58% of voters said he does not have the mental capability to serve effectively as president. That was a grim picture of the present, not just looking ahead to another potential term.

Before the 2020 election, Olshansky, at the University of Illinois, Chicago, published a paper that predicted both Biden and Republican rival Donald Trump were bound to maintain their good health beyond the end of this presidential term.

Nothing has changed Olshansky's mind. 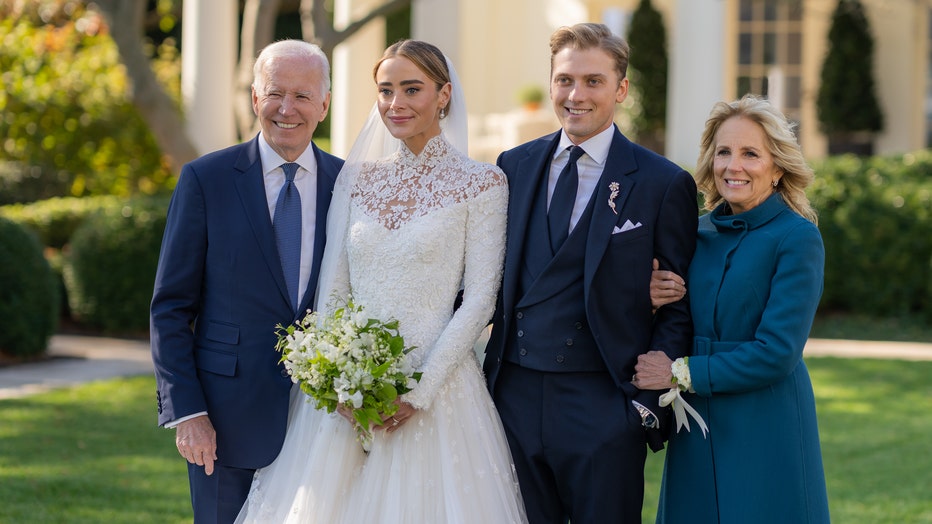 In this handout provided by The White House, President Joe Biden and First Lady Jill Biden attend the wedding of Peter Neal and Naomi Biden Neal on the South Lawn of the White House on November 19, 2022 in Washington DC. (Photo by Adam Schultz/The Wh

Biden is already in the club of high achievers for people his age. Unlike 92% of people 75 and over in the U.S., he still has a job.

And he’s been on a roll. The November elections produced the best result for a Democratic president’s party in midterms in decades. The president also sealed consequential legislative victories in recent months, on climate, infrastructure, health care expansion, military aid to Ukraine and more.

Biden says he begins most days with an 8 a.m. workout.

"If I let it go for a week, I feel it," he told the "Smartless" podcast. "I used to be able to go for a week and nothing would change."

White House aides say Biden reads his briefing book deep into the night, holds intensive evening meetings with advisers and doesn't balk at scheduling requests that may have him out late, though rarely up early. Biden has been diagnosed with several common age-related health conditions, none causing serious problems.

Much of the leadership in the U.S. Congress is over 70, especially Democrats, and so were Biden's main rivals in the 2020 Democratic primaries and Trump. 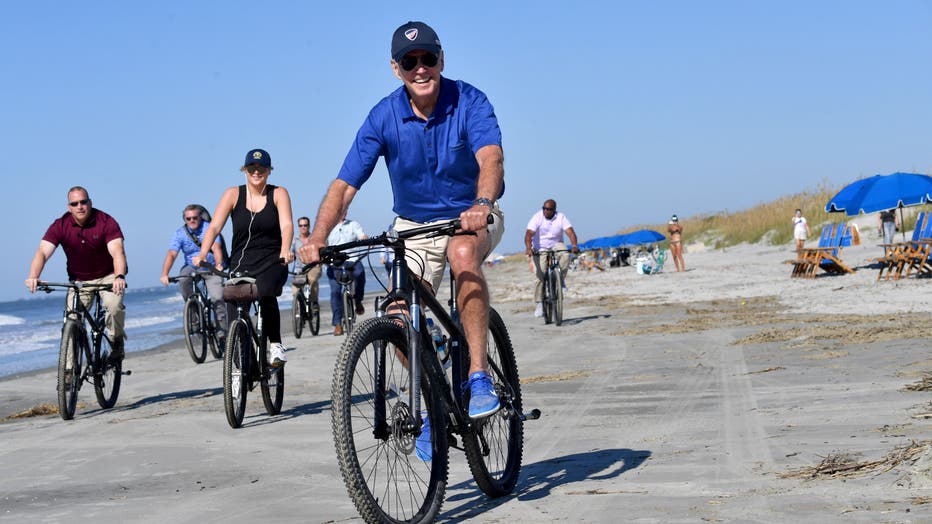 US President Joe Biden rides his bicycle along the beach while on vacation in Kiawah Island, South Carolina, on August 14, 2022. (Photo by NICHOLAS KAMM/AFP via Getty Images)

Attribute that, in part, to increasing longevity.

"Life expectancy back around 1900 in the United States was about 50," Olshansky said, "and we added about 30 years" since.

In Cockeysville, Maryland, outside Baltimore, Nelson Hyman, 85, and his wife, Roz Hyman, 77, credit Biden with getting big things right and especially with appointing a strong team. To these Democrats, that adds up to an effective presidency that taps the value of age in a society that often doesn't.

"I’ve always felt the president is as good as the people that he appoints, and I think he’s appointed some very, very good people, very competent people, and he uses them," said Roz, a retired counsellor in a psychiatric hospital.

"Now, are you going to ask me, is he going to be competent in two years? Who knows?"

Jamieson, director of the Annenberg Public Policy Center, said that when a perception takes hold in the public, any slipup can feed it, whether it is relevant or not.

When Biden tumbled on his bicycle in Delaware in June, the mishap fed the perception of a president not at the top of his game physically.

"Those of us that know a little about aging were pretty impressed by the fact that he was on his bicycle to begin with ... that you’ve got somebody who is really active and healthy for his age," said Olshansky. Instead, the focus was on his injury-free fall.