WASHINGTON - The Biden administration is asking the Supreme Court to end asylum restrictions, but requested a delay until at least after Christmas.

The administration made the plea in a filing Tuesday, a day after Chief Justice John Roberts issued a temporary order to keep pandemic-era limits on migrants in place. Before Roberts issued that order, the restrictions were slated to expire on Wednesday.

Migrants have been denied rights to seek asylum under U.S. and international law 2.5 million times since March 2020 on grounds of preventing the spread of COVID-19 under a public-health rule called Title 42.

The federal government acknowledged in its filing to the Supreme Court that the end of Title 42 will likely lead to "disruption and a temporary increase in unlawful border crossings" but asked the court to reject efforts by a group of conservative leaning states to keep Title 42 in place.

"The government in no way seeks to minimize the seriousness of that problem. But the solution to that immigration problem cannot be to extend indefinitely a public-health measure that all now acknowledge has outlived its public-health justification," the government wrote. Instead the government said it is surging resources to the U.S.-Mexico border to deal with any temporary disruptions that occur. 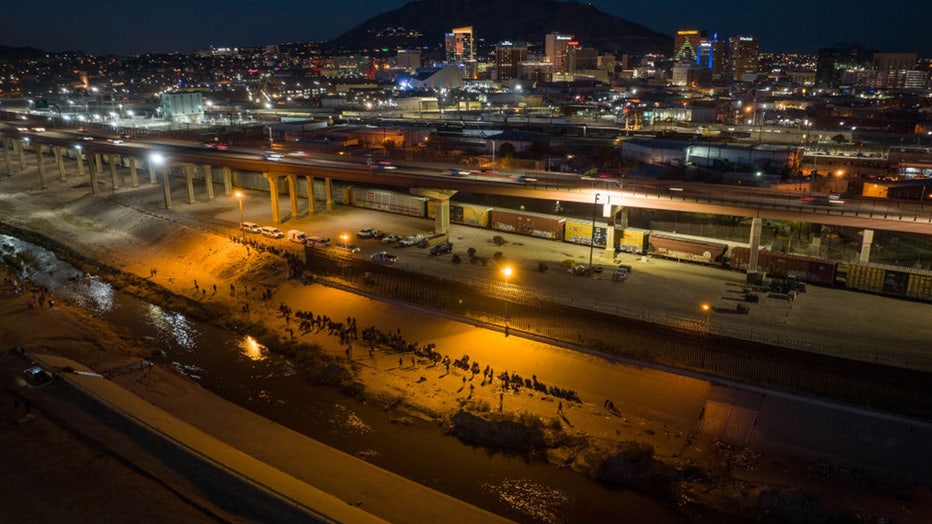 FILE - As seen from an aerial view, hundreds of migrants wait to be processed by U.S. Border Patrol agents after crossing the Rio Grande into El Paso, Texas to seek asylum on Dec. 19, 2022, from Ciudad Juarez, Mexico. (John Moore/Getty Images)

The federal government also asked that if the court denies the states' efforts to keep Title 42 in place indefinitely that the court give the government some time to prepare.

Specifically the government asked if the Supreme Court acts before Friday, it leave the temporary stay in place just until end of day on Dec. 27. And if the court denies the application on Friday or later, it wants the court to keep the restrictions in place until the second business day after the court issues an order. Either timeline — if granted — would mean Title 42 would be in place until at least after Christmas.

The request comes as suspense mounted at the U.S. border with Mexico about the future of restrictions on asylum-seekers.

Conservative-leaning states want to maintain a measure that allows officials to expel many but not all asylum-seekers. In a last-ditch appeal to the Supreme Court, they argued that an increased numbers of migrants would take a toll on public services such as law enforcement and health care and warned of an "unprecedented calamity" at the southern border. They have argued that the federal government has no plan to deal with an increase in migrants — while in Washington, Republicans are set to take control of the House and make immigration a key issue.

In El Paso, Democratic Mayor Oscar Leeser warned that shelters across the border in Ciudad Juárez are packed to capacity with an estimated 20,000 migrants who are prepared to cross into the U.S.

Despite the court's stay, the city of El Paso rushed to expand its ability to accommodate more migrants by converting large buildings into shelters, as the Red Cross brings in 10,000 cots. Local officials also hope to relieve pressure on local shelters by chartering buses to other large cities in Texas or nearby states, bringing migrants a step closer to relatives and sponsors in coordination with nonprofit groups.

"We will continue to be prepared for whatever is coming through," Leeser said.

Troops in tactical gear under Texas state command on Tuesday used razor wire to cordon off a gap in the border fence along a bank of the Rio Grande that became a popular crossing point in recent days for migrants who waded through shallow waters to approach immigration officials. They announced through a loudspeaker in Spanish that it's illegal to cross there.

Texas said Monday that it was sending 400 National Guard personnel to El Paso, after city officials declared a state of emergency. Leeser said the declaration was aimed largely at protecting vulnerable migrants, while the deployment included forces used to "repel and turn-back illegal immigrants," according to a Texas National Guard statement.

A flashing signed warned motorists to "watch for unexpected pedestrians" on a highway that extends along the fenced-off border, near three bridges that connect El Paso with Mexico.

At a church-affiliated shelter a few blocks from the border, migrants including children lined up early afternoon Monday in hopes of securing a bed for the night, accepting donations of food from a succession of cars bearing gifts. Police and municipal garbage workers arrived to remove abandoned blankets and discarded possessions.

The Rev. Michael Gallagher, a priest at Sacred Heart Church in downtown El Paso, said local faith leaders have been trying to pool resources and open up empty space. On Tuesday, a gym at the church gave shelter to 200 migrants — mostly women and children.

Outside the church Monday, Jose Natera, a 48-year-old handyman from the Venezuelan town of Guaicaipuro, said he traveled for three months to reach El Paso, sometimes on foot, with no money or sponsors to take him further.

"I have to stop here until I can get a ticket" out, he said.

"I have to do it," said Lujan, a 39-year-old construction worker. "I have kids and I know the struggle."

Biden administration officials said they have marshaled more resources to the border in preparation for the end of Title 42. That includes more Border Patrol processing coordinators, more surveillance and increased security at ports of entry.

About 23,000 agents are currently deployed to the southern border, according to the White House.

Immigration advocates have said that the Title 42 restrictions, imposed under provisions of a 1944 health law, go against American and international obligations to people fleeing to the U.S. to escape persecution — and that the pretext is outdated as coronavirus treatments improve. They sued to end the use of Title 42; a federal judge in November sided with them and set the Dec. 21 deadline.

The Roman Catholic bishop of El Paso, Mark Seitz, expressed concern that the stay would keep migrants who had to flee their homes from even making a case for protection in the U.S., after years of pent-up need.

"What happens now with all those on their way?" he said.

Title 42 restrictions have applied to all nationalities but have fallen disproportionately on those from countries that Mexico has agreed to take back: Guatemala, Honduras, El Salvador and, more recently Venezuela, in addition to Mexico.

Santana reported from Washington, D.C. Juan Lozano in Houston and Alicia Fernández in Ciudad Juárez contributed to this report.