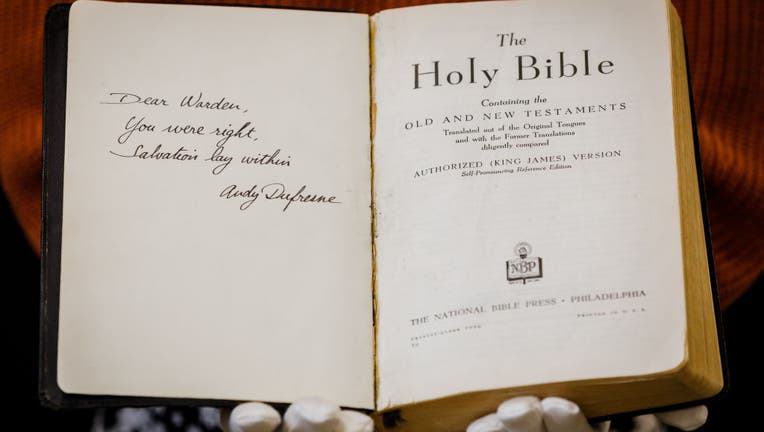 Andy Dufresne's (Tim Robbins) Rockhammer Bible from "The Shawshank Redemption" (1994) on view at the Propstore on September 8, 2022, in Rickmansworth, England. (Photo by Tristan Fewings/Getty Images)

The Holy Bible used in the 1994 classic film "The Shawshank Redemption" has been sold in an online auction for about $443,000.

In the movie, prison warden Samuel Norton, played by Bob Gunton, hands Andy Dufresne, played by Tim Robbins, a Bible and tells him, "Salvation lies within." In the film’s climax, Norton discovers that his secret and illegal bookkeeping accounts had been switched with the Bible. In the front of the book, Norton finds a handwritten message from Dufresne that reads: "Dear Warden, you were right, salvation lay within."

Turning the page to the Exodus chapter, Norton then finds the perfect outline of the tiny rock hammer that Dufresne had used during his time at Shawshank State Penitentiary to slowly tunnel his way out. 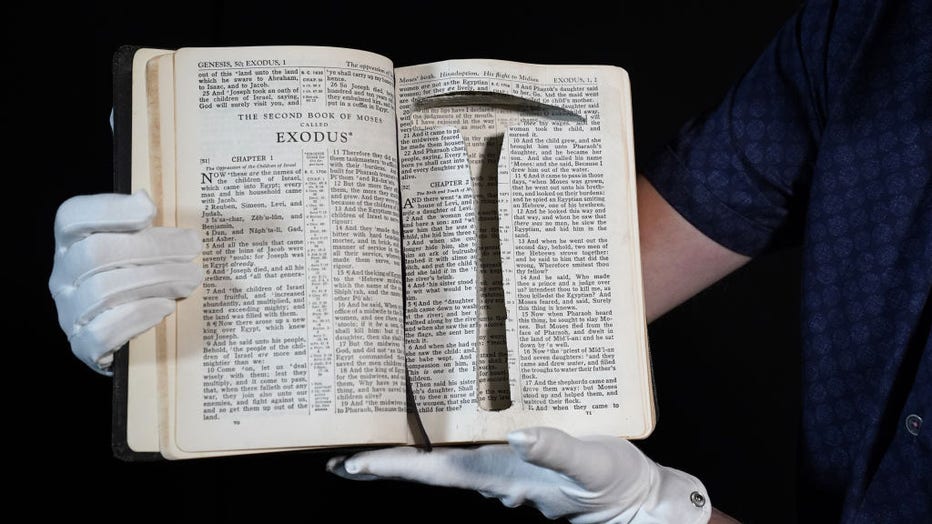 Previously unissued photo dated 08/09/22 of Propstore's Tim Lawes holding a screen-matched 'Rock hammer' bible used by the character Andy Dusfresne in the 1994 film 'The Shawshank Redemption' during a preview at the Propstore in Rickmansworth, Hertfo

"Only one rockhammer Bible was finished for the pivotal scene, as the process of cutting the hammer outline was precise and time-consuming," the listing for the item reads on Propstore Auction’s website.

"Since production, the Bible has undergone some minor, careful and sympathetic restoration, most notably at the base of the hammer cut-out and inside the cover," it adds. 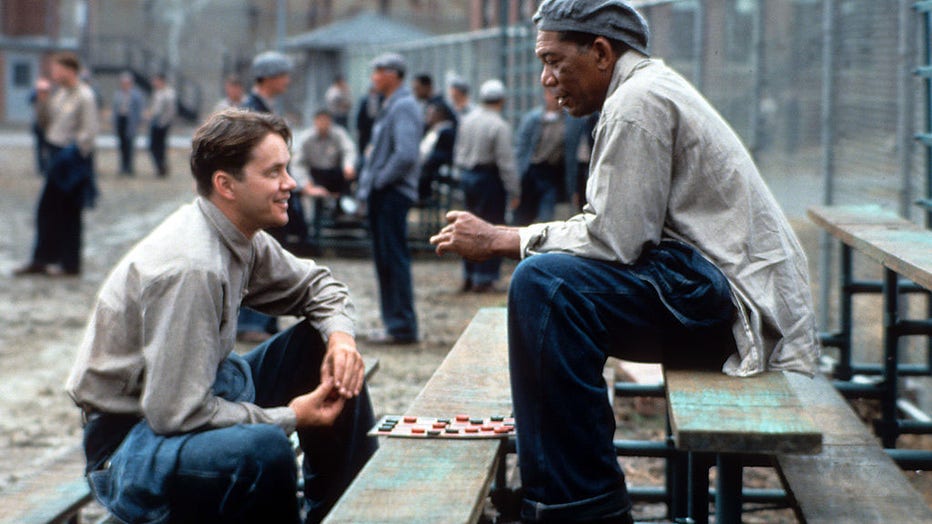 Tim Robbins and Morgan Freeman sitting outside on the benches playing checkers and talking in a scene from the film 'The Shawshank Redemption', 1994. (Photo by Castle Rock Entertainment/Getty Images)

"The Shawshank Redemption," which also starred Morgan Freeman, was written and directed by Frank Darabont and based on the 1982 Stephen King novella "Rita Hayworth and Shawshank Redemption." It received critical acclaim upon its release but did not immediately earn at the box office, in part due to competing films like "Pulp Fiction" and the unusual title.

However, the drama film went on to receive seven Academy Award nominations, including Best Picture, Best Adapted Screenplay, and Best Actor for Freeman. While it didn’t win, the momentum prompted Warner Bros. studio to re-release the film in theaters and order 320,000 VHS copies, which was high at the time, according to Variety.

The movie ultimately transformed into a classic as word of mouth spread, becoming the most rented video of 1995, Variety reported.

RELATED: First-edition copy of the US Constitution to be auctioned off