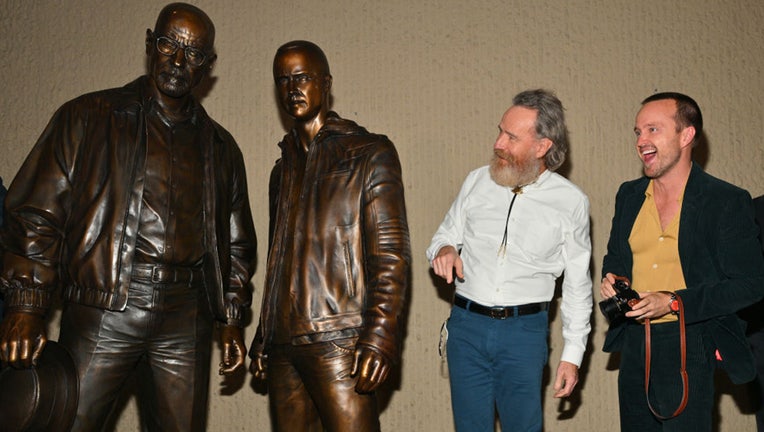 "Better Call Saul"  wraps up after six seasons Monday night, ending the long run of the "Breaking Bad" universe about the Albuquerque’s cartel-fueled drug ring and the underbelly of New Mexico’s most populated city – a plot that is a little too close to home for some residents.

"I think what you saw on ‘Breaking Bad’ should be a documentary, honestly. I think, really, that is the reality in New Mexico. We try to say it’s fictional, but that is the reality, the Jesse Pinkman, the Heisenbergs, the man who is running everything, Gus [Fring], and the way that they’re bringing it in from Mexico is exactly the way that it is right now, so we’ve joked that it should be on PBS," Aragon said. "That is, unfortunately, the reality."

Heisenberg is now depicted in a larger-than-life bronze statue in Albuquerque alongside actor Aaron Paul’s Jesse Pinkman, White's former student who becomes his literal partner-in-crime throughout the series. Their wise-cracking, ethics-challenged attorney, Bob Odenkirk’s Saul Goodman, hasn’t received his own statue yet but landed the spinoff AMC series "Better Call Saul" in 2015. The shows have received high critical acclaim throughout their runs and attracted a large, loyal fan base in the streaming era.

Late last month, Cranston and Paul were honored by the city when the bronze, 500-pound statues were unveiled at the Albuquerque Convention Center. Both actors, along with the show creators and a slew of "Better Call Saul" actors, attended the ceremony. They have made appearances on "Better Call Saul," which takes place before and after the events of "Breaking Bad."

Aragon feels the ceremony and statues are hypocritical, because liberal protestors took to the streets and toppled statues of everyone from Thomas Jefferson to George Washington to Christopher Columbus during unrest across the nation following the murder of George Floyd in 2020. In Albuquerque, protestors chanted, "tear it down" as they brought down a statue of the Spanish conquistador, Juan de Oñate, who became the first Spanish governor of New Mexico centuries before it became a U.S. territory and later a state.

"Now we have brand-new statues," Aragon said. "Now we’re putting fictional characters out in front. We have Jesse Pinkman and, of course, Heisenberg, and we have now erected statues and our progressive mayor from the city of Albuquerque has stood behind them. We’re funding those, so it’s OK to go get rid of real historical figures and now, somehow it’s even better, to [have] fictional, drug-dealing figures."

When memorials, statues and monuments were vandalized, toppled or removed in 2020, Aragon didn’t consider it an attempt to erase history. Instead, he feels it was simply vandalism.

"I see it as a destruction of public property of any kind," Aragon said. "These are publicly funded statues… I hate it. I certainly wish the progressives would protest in a peaceful way without destruction of private, taxpayer-funded property, but unfortunately they have resorted to this, and it is being condoned in every blue state and every blue city."

"Breaking Bad" creator Vince Gilligan, who co-created "Better Call Saul" alongside Peter Gould, helped fund the statues but acknowledged that some may view it as sending the wrong message amid a nationwide opioid crisis. Aragon, who is among the outspoken critics, admits the popular shows have brought newfound recognition to Albuquerque, which boasts one of the highest per capita murder rates in the nation.

"It’s not the type of recognition we want for the city of Albuquerque, or for our state," Aragon said.

Aragon – who watched the original series but not the spinoff – feels that media coverage surrounding "Breaking Bad" and "Better Call Saul" have made it appear that Albuquerque residents condone the behavior of fictional drug kingpins specializing in meth.

"There is so much media bias," he said. "We see these guys as good guys, but we don’t even have a bonding system in Albuquerque, the judicial system doesn’t exist, and that’s exactly the problem as more of the criminals continue to commit the crimes without any sort of penalties."

He blames a lot of the city’s issues on Democratic policies, but Albuquerque is also home to a plethora of substance abuse issues, a constant reminder that fictional characters portrayed on "Breaking Bad" and "Better Call Saul" represent real-life problems.

"This is what happens when you have an America that is destroyed by drug and alcohol dependency, and you see that when you see New Mexico and the purveyors of that are Jesse Pinkman and Heisenberg," Aragon said.

Last month, a report from John Cardinale of KOAT Action News in Albuquerque found that residents were split on their feelings about the statues, with some seeing them as a glorification of drugs, and others viewing them as a symbol for the immense impact the show has had on the city’s economy.

The Albuquerque mayor’s office appeared to agree with the latter, saying in a statement, "The positive impact that the cast and crew of Breaking Bad have had on our economy and film industry can't be minimized. The franchise has had over $385 million in economic impact, lifting up countless local businesses."

New Mexico has emerged as a hotbed for the entertainment industry because it offers up to a 35% rebate for state spending on film projects to help the local economy and unemployment rate.