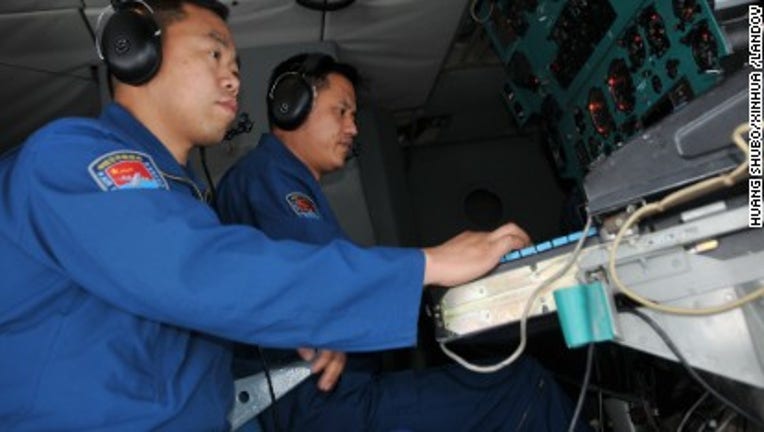 BEIJING -- New satellite images provided by a French defense firm show 122 objects floating in the southern Indian Ocean, not far from other satellite sightings that could be related to missing Malaysia Airlines Flight 370, the Malaysian transport minister said Wednesday.

When photographed by the satellite on Sunday, the objects were scattered over 154 square miles (400 square kilometers), acting Transportation Minister Hishammuddin Bin Hussein said. That's about the size of Denver, Colorado.

The location recorded by the satellite was within the search area scoured Wednesday by a dozen aircraft from six nations, the Australian Maritime Safety Authority said. Nothing was found, the agency said on Twitter.

Experts say it's possible the materials may have drifted or sunk.

The latest objects seen on satellite images provided by Airbus Defence and Space range from about 3 feet (1 meter) to about 75 feet (23 meters), Hishammuddin said. Some appear bright, indicating they may be solid, he said.

The latest images appear to be the most significant discovery yet in the hunt for the missing plane, which vanished March 8 with 239 people aboard, said CNN aviation analyst Miles O'Brien.

"There's a very good chance this could be the break we've been waiting for," he said.

Aviation safety analyst David Soucie agreed, saying he was particularly intrigued by the size of the 75-foot object.

"It has potential to be a wing that's floating," he said. "So I'm really encouraged by it, I really am."

But satellites have captured images of objects before during the current search, crews have yet to spot anything definitively linked to the airplane and ships haven't recovered anything of note.

"This is a positive indication that the searchers are getting closer to the origin of the crash, but there are many uncertainties," said Ian MacDonald, an oceanographer at Florida State University. "There could be many objects floating in the ocean, that are large or small, that are completely unrelated to the crash."

Until searchers get their hands on the objects, he said, it's too soon to say whether they are parts of the plane or garbage floating in ocean waters.

Officials have warned that objects spotted in the water may turn out to be flotsam from cargo ships, and that finding anything from the plane still could take a long time.

"There's always a possibility we might not actually find something next week or the week after," Mark Binskin, vice chief of the Australian Defence Force, told CNN's Kate Bolduan on Tuesday. "I think eventually, something will come to light, but it's going to take time."

Five ships -- one from Australia and four from China -- also are in the search zone, Australian authorities said.

If search teams are able to find debris confirmed to be from the plane, it will help officials figure out roughly where the aircraft went down.

They would then be able to focus the search under the water to try to find larger pieces of wreckage and the all-important flight data recorder, which may hold vital clues about what happened the night the plane disappeared.

U.S. hardware designed to help with that task arrived Wednesday in Perth, the western Australian city that is the base for the search efforts.

The United States sent a Bluefin-21 autonomous underwater vehicle, which can search for submerged objects at depths as low as 14,700 feet (about 4,500 meters), and a TPL-25, a giant listening device that can help pinpoint the location of pings from the flight data recorder. Towed behind a ship, the TPL-25 can detect pings at a maximum depth of 20,000 feet (about 6,100 meters).

Time is against that part of the search, though, as the plane's pinger is expected to run out of power within the next two weeks. The Indian Ocean has an average depth of about 13,000 feet (about 4,000 meters).

The wait for answers about what happened to the plane and where it is now has taken a toll on the relatives of those on board.

Chinese kin have been particularly upset by Malaysian authorities' announcement Monday, based on analysis of satellite data, that the plane had crashed into the southern Indian Ocean with the loss of all lives aboard.

"It is still theory, and it's just still analysis" said Stephen Wang, whose mother was on the missing flight. "No one have seen anything."

Many relatives of those missing haven't accepted the theory, and still think their loved ones might still be alive, Wang told CNN's Pauline Chiou.

Cheng Li Ping says she cannot accept that her husband is dead, even after authorities announced there were no survivors.

"My heart can't handle it. I don't want to hurt my children," she told CNN on Wednesday as she waited in Kuala Lumpur, Malaysia, for evidence about what happened.

"I can't trust the Malaysian government. I can't work now because all I can think about is my husband and my children," she told CNN's Sara Sidner. "I don't have strength. ... My head is a mess."

On Wednesday, some families accused Malaysia Airlines of falling short of its promises to provide volunteer caregivers and accommodations for some family members. The airline couldn't immediately be reached for comment and did not send a representative to a news conference Wednesday.

The complaints came a day after hundreds of Flight 370 family members marched to the Malaysian Embassy in Beijing -- the flight's destination -- to voice their anger and frustration.

Some said the Malaysian government was covering up the truth and demanded tangible evidence the plane had ended up in the ocean.

The Chinese government, whose citizens made up two-thirds of the passengers on board the missing plane, also said it wanted more information from Malaysia. President Xi Jinping has sent a special envoy to Kuala Lumpur to deal with the matter.

Malaysian officials met with the Chinese envoy, said Hishammuddin, the transport minister, and briefed them extensively on the analysis of the satellite data that led to the crash conclusion.

The Malaysians' comments appeared to have done little to placate the anger among the families, however, and it appeared to be spreading more widely among the Chinese public.

Some Chinese celebrities used social media to urge people to boycott Malaysian products and visits to the country.

Chen Kun, one of China's most popular actors, accused the Malaysian government and Malaysia Airlines of "clownish prevarication and lies." His post Tuesday calling for a boycott was reposted more than 65,000 times on Weibo, China's Twitter-like microblogging platform.

"I've never been to Malaysia, and I will no longer plan to go there anymore," Meng Fei, the host of one of China's most popular TV shows, wrote Wednesday on Weibo, calling for others to repost the comments if they felt the same. More than 120,000 users did.

Other social media users, albeit with smaller followings, argued against punishing Malaysia over the matter.

Chen Shu, a journalist, warned that a boycott would "hurt the relationship of Chinese and Malaysians" and long-term regional ties.

Chinese authorities regularly censor Weibo posts. The fact the anti-Malaysian posts by high-profile users weren't deleted suggested either tacit approval or at least an unwillingness to wade into the debate by Chinese government censors.

Hishammuddin, however, praised his country's performance, saying officials had overcome significant diplomatic challenges to bring together 26 countries, at one point, to participate in the search.

"History will judge us well," he said.

In the United States, meanwhile, a Chicago-based attorney has taken the first formal legal steps related to the missing plane.

Monica Kelly, a lawyer at Ribbeck Law, asked an Illinois state judge Tuesday to order Malaysia Airlines and Boeing, which manufactured the missing airplane, to provide documents and other information.

Kelly is seeking specific information about the airline's batteries, details on the fire and oxygen systems, and records related to the fuselage.

The filing appears to be the first move toward U.S.-based litigation stemming from the plane's March 8 disappearance. The firm said it plans to build a multimillion-dollar suit against the airline and Boeing.