AUSTIN (KXAN) — A new poll of Texans over the weekend shows Sen. Bernie Sanders with increasingly likely odds to capture the most Democratic votes in Texas during the March 3 primary election.

According to a Nexstar/Emerson College poll, 30.8% of respondents said they will/ did vote for Sanders and 25.9% said that they will/ did vote for former Vice President Joe Biden. This brand new poll offers insight into the Texas Democratic primary voters following Biden’s victory in the South Carolina primary this weekend and after early voting in Texas ended Friday evening.

Former New York City Mayor Michael Bloomberg at 16.2% and Sen. Elizabeth Warren at 13.8% finished third and fourth and appear to be the only other two candidates who might secure delegates. If candidates don’t hit a 15% threshold either statewide or at a congressional district level, they can’t qualify for any national convention delegates. 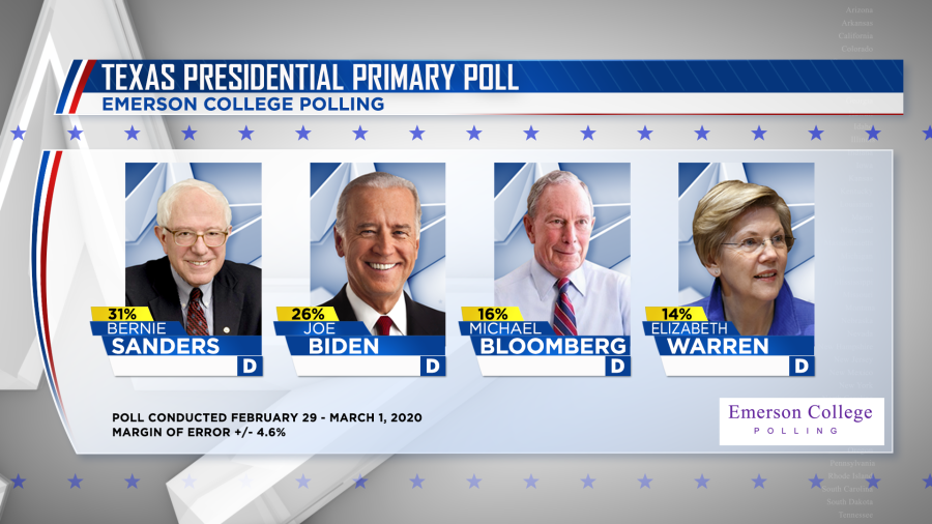 March 3 is Super Tuesday, the day on which 14 states including Texas will carry out their primary elections. Super Tuesday will also be the first time Bloomberg’s name appears on the ballot.

Mayor Pete Buttigieg, who announced Sunday he is suspending his campaign, received 4.5% of the support in this poll. Experts say Biden may benefit most from that. As for the rest of the candidates, Sen. Amy Klobuchar received 4.1%, Rep. Tulsi Gabbard got 3.1% and businessman Tom Steyer, who dropped out of the race Saturday, received 1.6%. 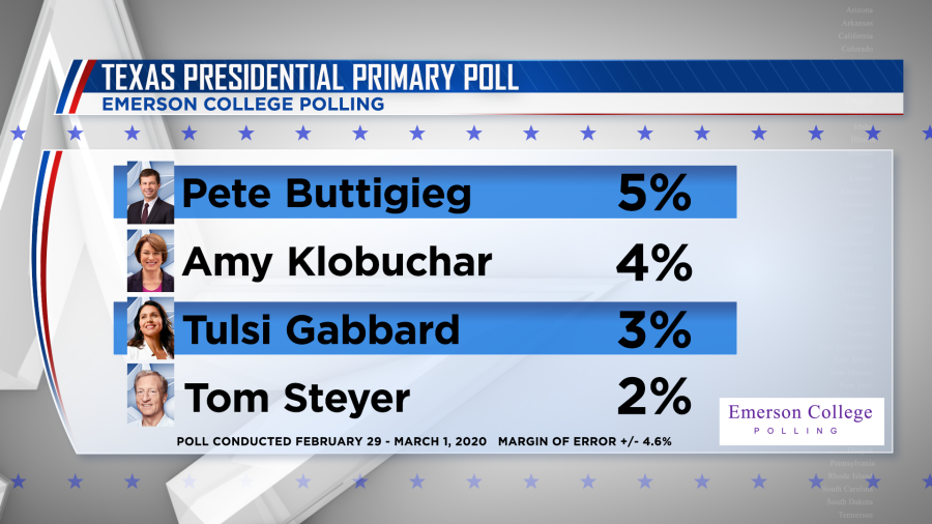 The respondents in this poll are 450 Texans across the state who were surveyed between Saturday and Sunday. Emerson College said the margin of error is +/-4.6%. The poll surveyed Texans about presidential and senatorial candidates as well as other public policy issues. Of those surveyed, 73.9% identified as Democrats, 3.3% identified as Republicans, and 22.8% identified as Independent/other.

These results align with other recent polling in Texas. A Dallas Morning News- UT Tyler poll conducted between Feb. 17-26 showed that Sanders at 29% had moved into the lead in the Texas Democratic presidential race, followed by Bloomberg at 21% and Biden at 19%. An NBC/Marist poll gathered results from Feb. 23-27 also showed Sanders garnering the most support in Texas at 34% of likely Democratic primary voters, with Biden receiving 19%, Bloomberg receiving 15%, and Warren receiving 10%.

Back in the 2016 Democratic primary, Sanders got 33% of the vote in Texas whereas Hilary Clinton got 65% of the vote.

“What was most interesting is watching Bernie Sanders competing in a state that he lost by 30 points just four years ago,” said Spencer Kimball, an assistant professor at Emerson College who helped carry out this poll. “I’m not sure if going to win the state, but he’s leading in the poll. And if he doesn’t win it, it’s certainly going to be very close.”

“And that’s a big dramatic shift from where the party was on when Clinton ran against him,” Kimball continued.

Of the people surveyed for this Nexstar/ Emerson College poll, 52.3% said that during the Democratic primary in 2016 they voted for Hilary Clinton and 22.8% said they voted for Bernie Sanders. 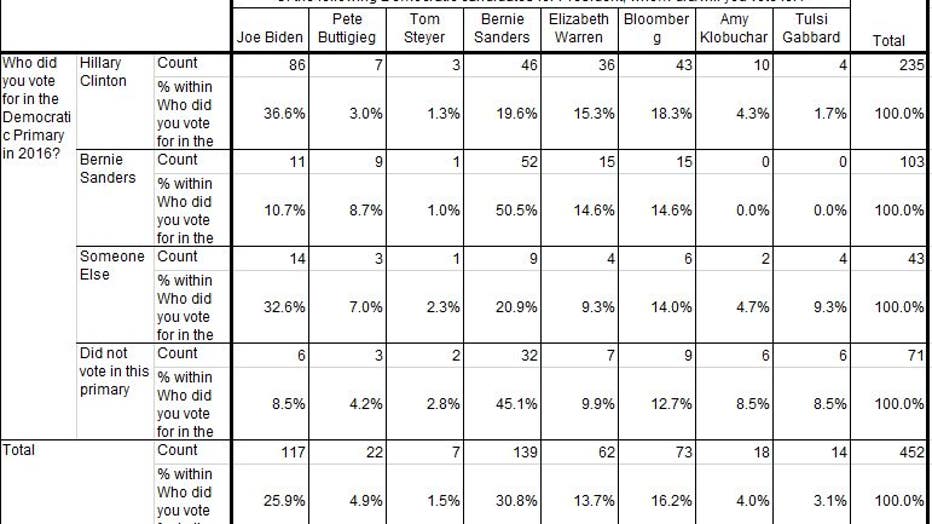 Can a Democrat win in Texas?

Sanders expressed confidence he will win the most votes in Texas in November, but it has been four decades since a Democrat won the presidential vote in Texas.

“I think a lot of people look back at that Beto O’Rourke-Ted Cruz race and think if things were just a little bit different, that could have been a major upset,” Kimball said. “We’ll have to see in real-time if that happens in 2020.”

In this poll, a majority of those surveyed, 68.6% think that President Donald Trump will not be elected to a second term in office, while 31.4% said they do believe he’ll be re-elected.

Of all the issues the respondents to this poll said would shape their vote for president, health care rose to the top — 31.8% of those surveyed said health care is the single most important issue in deciding for whom to vote for president, while 16.8% said social issues, 15.7% said the economy, 7.7% said the environment, 7% said impeachment, 6.7% said immigration, 5.6% said education, 4.9% said foreign policy and terrorism, and 3.9% said gun control. 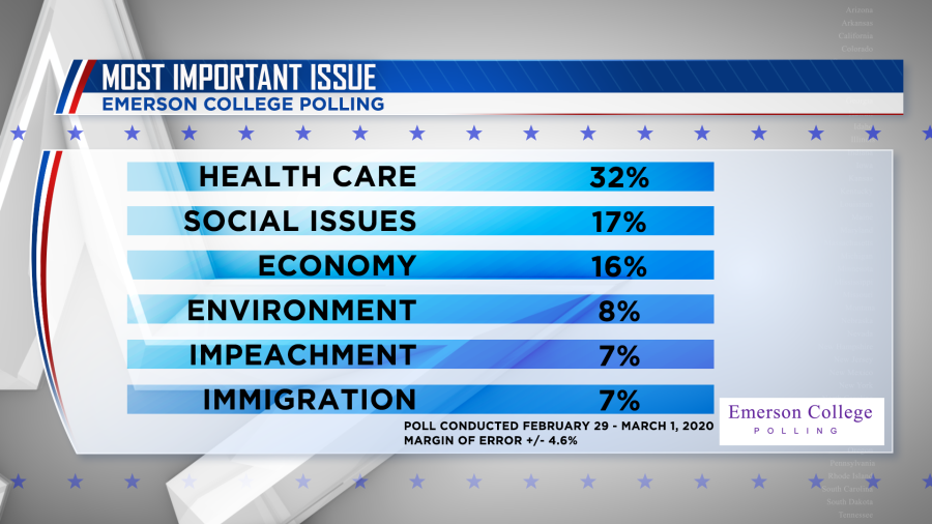 Could voters change their minds?

More than a third of those surveyed — 35.7% — said they could change their mind about who to vote for once they actually get around to casting a ballot.

Kimball said he saw similar behavior with voters swinging between candidates in Iowa and Nevada.

“And that type of swing directly impacts the results of the election,” he noted.

Kimball said this poll’s results show that around 90% of voters have made up their minds on who to vote for, but one out of every ten people surveyed said they will decide on election day who to vote for.

“And that’s where we can start to see some differences from what the polling is showing,” he added.

Emerson College carried out this poll among primary voters all over the state of Texas, taking the 36 congressional districts in the state and dividing them up into five regions. This poll was carried out both over the phone and online. 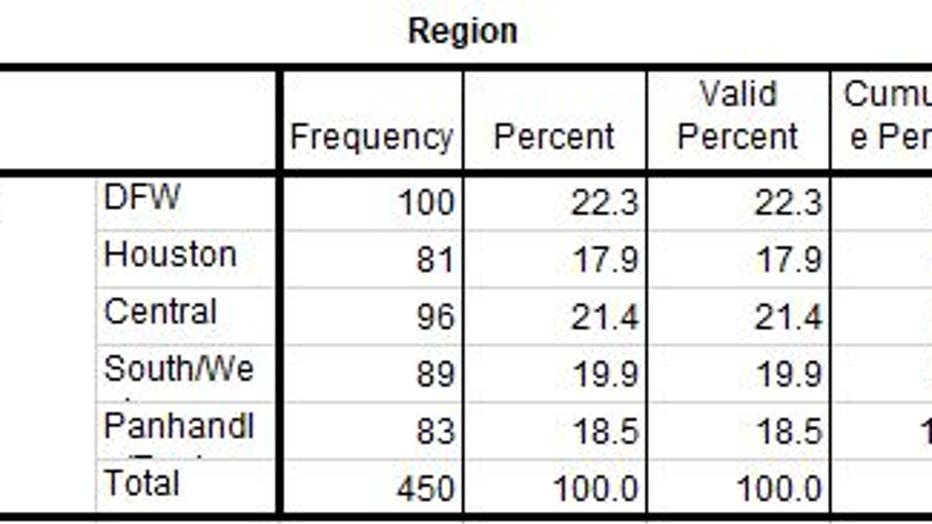 Because these results have a margin of error of +/- 4.6%, Kimball notes, “keep in mind that there’s a margin of error and that come election night, those scores are going to fluctuate somewhere around that 4.6% for each candidate.”

Of those surveyed, 13% said the highest level of education they achieved was high school or less and 45.4% of those surveyed said their annual household income is less than $50,000 per year.

In addition to their views on the Democratic presidential primary race, respondents were also asked about the Texas Senate race, marijuana policy, coronavirus, border security, and hydraulic fracturing.

Poll collaborations with Emerson College and Nexstar have also been carried out this year in Nevada, South Carolina, and California.

If you have not voted yet in Texas, go to this website for more information about what is on the ballot and where local polling places are.