Yesterday morning at 5:00 a.m., Bellevue Police investigators, assisted by members of the Bellevue Police SWAT team, arrested a suspect in connection with a December 26th burglary of a Bellevue gun store. The suspect, a 17 year-old juvenile male who resides in Kent, WA, is also suspected in at least two other similar burglaries in the area.

Armed with this connection, as well as other additional evidence, investigators were able to locate the suspect, who was the passenger in a stolen vehicle being driven in Auburn. When the suspect was arrested, the vehicle he was found in had the same license plates as whose that were seen on the stolen vehicle used in the Bothell marijuana store Robbery. A stolen handgun was found at the suspect's feet when he was arrested. That handgun had been stolen from Renton in a separate theft.

The investigation in this case continues, and additional arrests are possible in the future.

BELLEVUE, Wash. -- The Bureau of Alcohol, Tobacco, Firearms and Explosives (ATF) says the surveillance video above shows thieves using a stolen vehicle to smash-in the door of the West Coast Armory gun shop in Bellevue early Tuesday morning -- the day after Christmas -- to make off with approximately 70 firearms.

The ATF and the National Shooting Sports Foundation (NSSF) -- the trade association for the firearms industry -- announced a reward Friday for
information leading to the arrest and conviction of the persons responsible for the December 26th  burglary. The ATF is offering a reward of up to $5,000, matched by the NSSF for a possible reward of up to $10,000. To be eligible for the reward, you must contact The ATF at:

Bellevue Police say just after 3am on Tuesday, a garbage truck driver heard the alarm at West Coast Armory and saw the door had been smashed-in. The suspects were gone when police got there.

Bellevue Police believe there were three suspects who fled in what was later determined to be a stolen vehicle.

Bellevue Police later tweeted that officers had recovered the suspect vehicle and it was being processed for evidence. The ATF says the The vehicle had been abandoned in a nearby apartment complex and other suspects may have been involved in helping the three flee the scene.

Of the approximately 70 firearms stolen, the ATF says the vast majority were handguns, but four semiautomatic rifles were taken, as well as one short-barreled rifle and a sound suppressor, sometimes known as a “silencer.”

Ofc. Tyler said there was also a break-in previously at the same place in which four guns were taken. Three of those were recovered, he said. They don’t believe the two robberies are related. 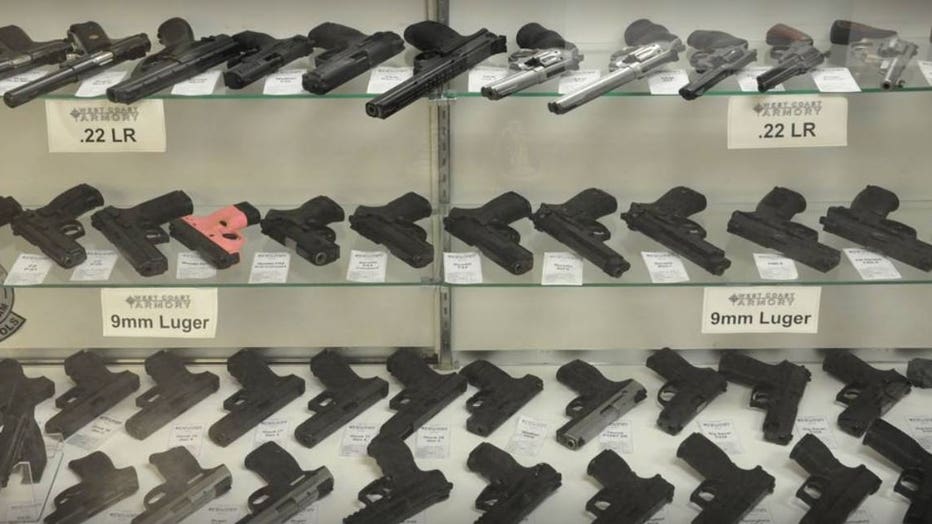