BELLEVUE, Wash. - Police Chief Steve Mylett is responding publicly to criticism over the city's handling of dueling protests that converged in the downtown area Saturday night.

Bellevue Mayor Lynne Robinson, at the request of Mylett, declared a civil emergency when it appeared the demonstrations could get out of hand. The emergency declaration banned weapons of any kind that could be modified to cause injuries and damages to local storefronts, but the weapons ban was limited to the area where the potential conflicts were taking place.

"Some said we overreacted," said Mylett, speaking in a video posted on Bellevue Televison's YouTube channel. "But again, the end result was no injuries, no windows broken, no fires started."

RELATED: Police: 46 arrested or charged in Bellevue looting after death of George Floyd

Mylett said he understands the public's concerns about outright weapons bans amid protests, but ultimately, he had to balance public safety with the constitutional right to protest freely. 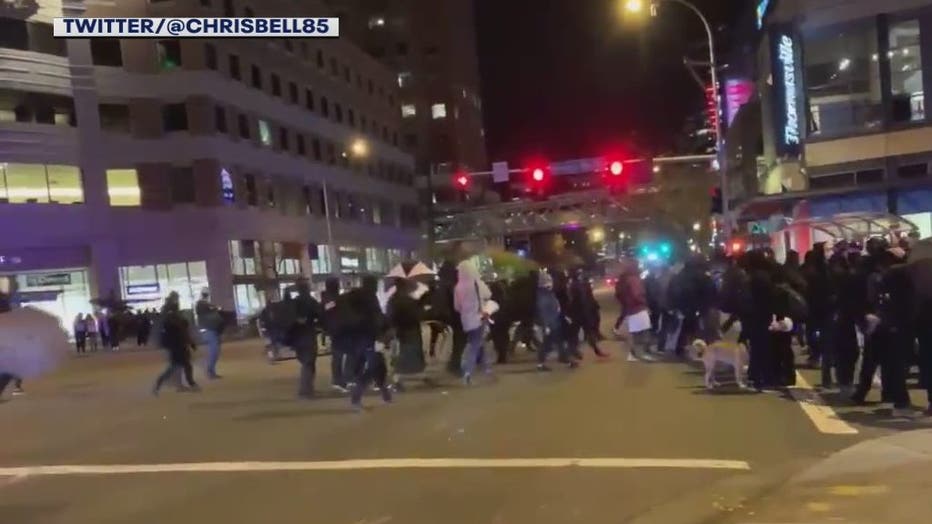 He said social media posts revealed that demonstrators were "coming to Bellevue to engage in the same type of behavior we're seeing in Seattle," where demonstrations have often turned to riots and ended with widespread property damage and injuries to police officers.

Investigators found buckets of rocks, propane tanks and propane canisters strategically placed near businesses ahead of Saturday's protests, Mylett said. The group that planned the protest also provided people with a map on social media showing which areas have more surveillance cameras than others.

Mylett said his job as police chief was to "provide a safe space" for protesters who intended on following the law.