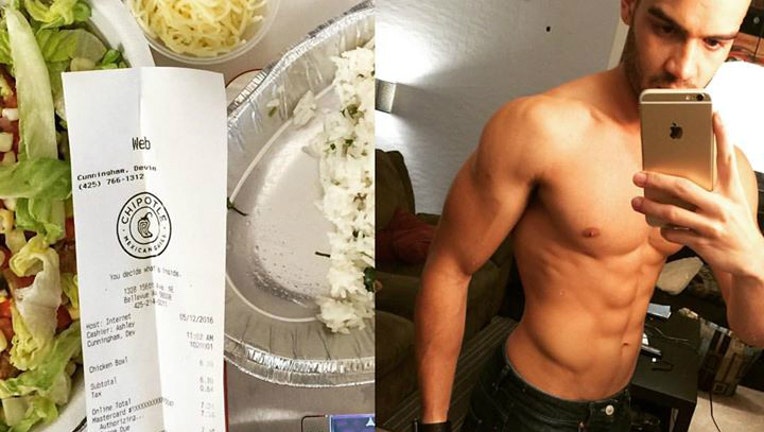 Sure, he loves their food. But it's about more than that. He's hoping to prove a point.

"I want to inspire people to be fit and not give up on their fitness goals," said Cunningham.

Man to eat at Chipotle for 366 days straight

Man to eat at Chipotle for 366 days straight

On Wednesday, he reached 314 days in a row of eating Chipotle on his quest to a full 366.

But it hasn't been an easy journey.

Remember when Chipotle shut down their restaurants in Washington and Oregon following an E. coli scare?

That put a kink in Cunningham's plan, but he found a creative way to keep the streak alive.

"So I woke up that morning when they all closed and had notifications, texts and missed calls from friends saying they were closing in Portland too," Cunningham told Q13 News.

"Right when they were all supposed to open I was at the Issaquah store, but there was a sign saying it was closed. Then ran to Bellevue, same sign ... no one would come to the door and that’s when I started to panic."

Cunningham said he even called friends in Spokane and looked up the fastest shipping prices which were way too high. That's when he knew he'd have to make a trip north to British Columbia.

"You look pretty good for eating Chipotle," the border agents told Cunningham as he explained his reason for visiting Canada.

"I got seven burritos and brought them back. I froze them and heated them up in my microwave oven for the next few days," he said.

Those burritos soon ran out, but Chipotle's problems did not.

So Cunningham had to make another trip north. This time the trip was not so smooth.

He made it back to B.C., stocked up on burritos and headed back to the border crossing.

"On the drive back, my window broke at the border and it was pouring down rain, so I drove from the border to Bellevue with my window down," he said.

He's also had to plan ahead to avoid regular closures -- that's right, no holiday feasting!

What do you eat?


First, Cunningham wanted to bulk up, so he would order as much as possible: double meat, guacamole, rice, beans and all the salsas. He was able to gain 16 pounds to 172.

His next challenge? Cut!

He switched to one burrito bowl a day for this part of the challenge, eating measured portions of a chicken or steak bowl. He has Chipotle package a few things, like rice/beans and cheese, separately so that he can do some of his own portion control. He also gets fajita vegetables, lettuce, pico and corn salsa. 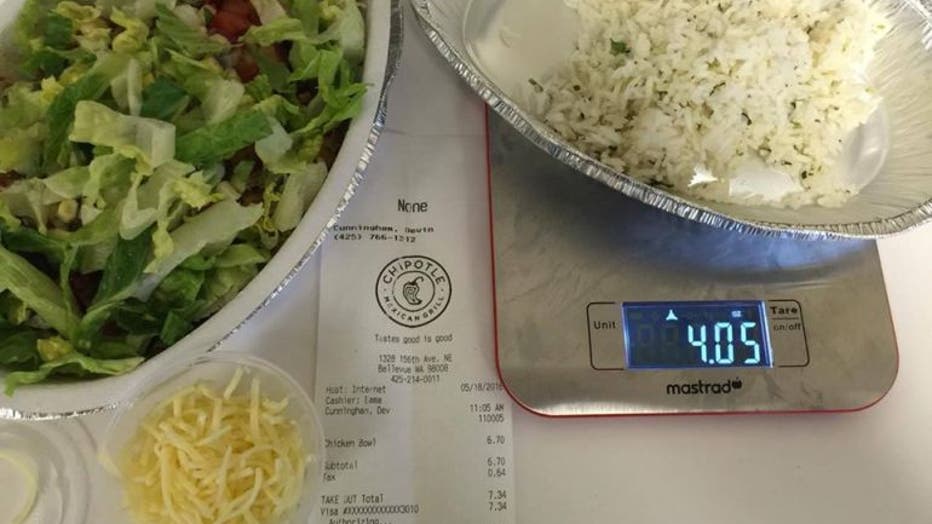 You're probably now thinking that Cunningham is completely tired of eating Chipotle.

But he says, nope.

"They have enough variety that I am able to switch up my meals enough to not get sick of it."

Why do you do it?

He wants people to know that you can eat the food you love and maintain a healthy weight, you just have to be smart about it.

"A lot of people try fad/crash diets like a no/low carbs diets that does not work and then get discouraged very quickly. I want to show people that they can be fit while still enjoying the food they love. When you enjoy what you eat on your "diet," and you do it in moderation, it is that much easier to achieve your fitness goals."

And he's got the evidence to prove it -- posting a photo on Instagram each day with a fresh receipt.