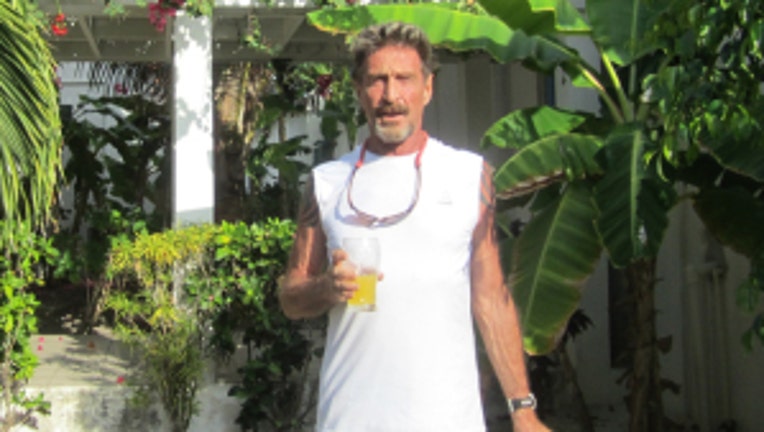 Authorities in Belize are trying to find and talk to Internet antivirus pioneer John McAfeeabout a fatal shooting in the Central American nation, a police spokesman said Monday.

"He is wanted for questioning in the murder of Gregory Faull, and we are still seeking him," said Raphael Martinez, a national police spokesman.

A housekeeper discovered Faull's body in a hallway of his home with a gunshot wound to the back of his head, according to Martinez and a notice on the national police's website. Police later arrived at the home north of San Pedro, on the Caribbean island of Ambergris Caye, and found the 52-year-old Faull "lying face-up in a pool of blood," according to the police website.

Police later found a 9mm shell at the bottom of stairs near Faull.

Accounts differ as to when this took place. Martinez said Faull, who lived alone near McAfee, was found Saturday morning. The police website, meanwhile, states the body was found around 8 a.m. Sunday and that Faull was last seen alive around 10 p.m. Saturday.

Authorities investigating the homicide are speaking to another person as they pursue multiple leads, said Martinez.

A laptop computer and cell phone are missing from Faull's home. According to the spokesman, police have not established a motive in the killing.

McAfee left his namesake Internet security firm in 1994 and has not been affiliated with the firm since then, said company spokeswoman Kimberly Eichorn. Citing its policy not to comment on former employees, Eichorn did not comment on the case.

CNN could not determine McAfee's current whereabouts or whether he has a lawyer.

According to a story on Wired magazine's website, McAfee said regarding Faull's death that he knew "nothing, other than I heard he had been shot."

McAfee told Wired that he's been at odds with Belizean authorities for months, adding that he's hiding from them somewhere in the country.

According to his alma mater, Roanoke College, McAfee graduated from that Virginia school in 1967 as a mathematics major. He went on to found several tech companies and launch groundbreaking products, including a voice recognition system Interpath in 1981, McAfee in 1988, and the instant messaging pioneer Tribal Voice in 1996.