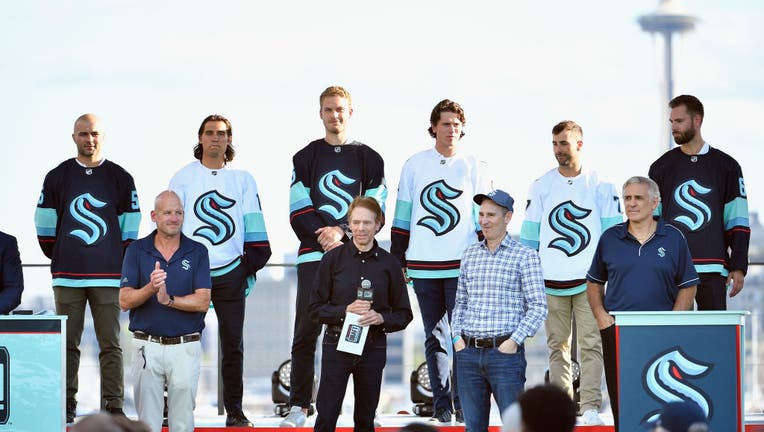 SEATTLE - Her long, black hair is tinged with purple streaks. She’s wearing cargo pants and black boots. The young girl with the stick in her hands doesn’t fit the traditional image of a hockey player.

Neither does the boy with red bushy hair in a yellow shirt, or the young girl demonstrating stickhandling from her wheelchair.

In this case, these children are two-dimensional characters inside an educational document that is the brainchild of Kyle Boyd, the Seattle Kraken’s director of youth and community development. His dream is to expose the widest possible audience in Seattle and beyond to the game of hockey, with the idea of appealing to kids of different genders, sizes and abilities while growing the fledgling team’s fanbase.

"The characters kind of become great avatars and the way of saying, ‘Hey, this is a sport that anyone can get into,’" Boyd said. "And then we want to make sure that we provide those pathways for everyone to get into it."

Before the Kraken take the ice for their first NHL season this fall, Boyd and the team have already started introducing the basics of hockey to schools and youth programs in the area. But they’re doing it differently from what other teams have done in the past.

A former elementary and high school history teacher, Boyd went searching for a school-based ball hockey program the Kraken could build around to introduce the game in physical education classes. There was none that met elementary school physical education standards, so Boyd set about creating one that did while trying to help launch other parts of the franchise.

He partnered with SHAPE America, a national organization that helps create the standards for K-12 physical education, to make sure the program checked all the boxes for educational requirements. He used a local artist to create characters representative of kids of all sizes, ethnicities and abilities to illustrate the skills being taught like stickhandling, passing and shooting.

SHAPE America said it’s believed to be the first ball hockey program created by an NHL team that meets elementary educational standards. The Kraken have already done some outreach programs with local youth programs this summer and hope to implement the curriculum with partner schools during the current school year.

"Hockey was something that I taught every couple of years that there was no set curriculum. It was kind of come up with your own unit plan," said Derek Severson, instructional specialist for health and physical education for the Highline School District south of Seattle. "So having that conversation with Kyle really kind of led to, ‘Are there any hockey curriculums out there to use?’ And there really weren’t."

Teams throughout the NHL have learn-to-play programs in their respective communities so in that sense Boyd and the Kraken aren’t outliers.

But Boyd wanted to create was something bigger.

The curriculum is as much a learning tool for students as a guide for educators, especially in the Pacific Northwest where many grew up without hockey as part of their backgrounds. A priority for Boyd was making the program easy to understand and implement.

"We needed to kind of make that first introduction at that very elementary level," Boyd said. "Some (programs) have kind of advanced past that where you’re able to do more of a practice plan type of document and less on the like, here’s the basics around holding a hockey stick. It’s very beginner."

He wanted pictorial representation as part of the curriculum that showed a range of diverse figures demonstrating the skills being taught because Boyd wants the program to reach multiple communities.

"I’m not an athlete. I know nothing about hockey," Johnson said. "I’ve seen ‘The Mighty Ducks’ when I was a kid and that was it."

Johnson’s task was bringing to life rough ideas of what these characters needed to represent. He leaned on cartoons from his youth -- "Hey Arnold," was an inspiration -- and worked extensively with Boyd and used borrowed equipment to help him get little things correct, like hand placement on the stick.

"I just messed around with a bunch of different designs and kind of found a groove with some characters that I liked, picking out different, not only ethnicities, but different heights, different body shapes and sizes, different ages and then different styles as well," Johnson said.

The next step is implementation. The curriculum is expected to be introduced in some schools this year. Severson said it’s not a requirement for teachers in his district to use it but he’s suggesting they find a couple of weeks -- probably in winter -- to add floor hockey to the educational programing.

"I think where we get started with this is in the classroom, just getting them exposed," Severson said. "Students getting a stick in their hands for the first time, and just learning the basics because I really think hockey can become prevalent in our community. But it all just starts with just giving students a chance to do that."