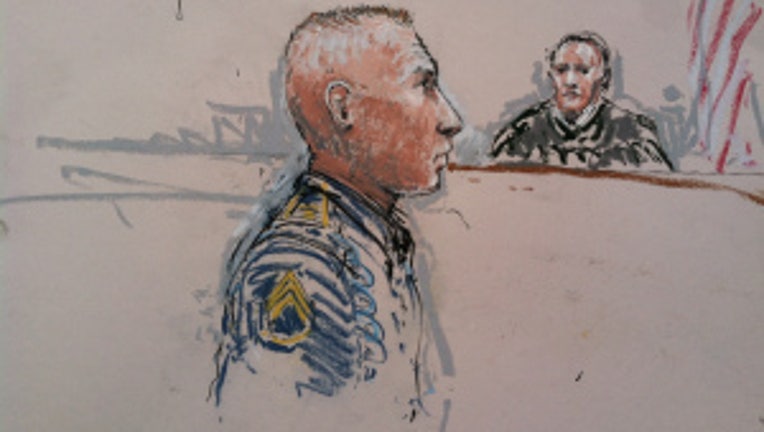 JOINT BASE LEWIS-McCHORD-- Staff Sgt. Robert Bales, accused of killing 16 villagers in Afghanistan, deferred to enter a plea when he appeared Thursday morning for his arraignment hearing at Joint Base Lewis-McChord.

Thursday was the first time Bales appeared in court since a two-week pretrial hearing in November. He faces 16 murder charges, and other counts of attempted murder. The military said in December that a death penalty against Bales will be pursued.

Bales' attorney, John Henry Browne, said he objects to portions of a judge-mandated psychological evaluation ordered Wednesday to evaluate the mental health of Bales in anticipation of a full trial. Browne wants private neuro-psychologists to be part of the evaluation; not just military doctors.

"Keep in mind these doctors are not independent doctors these are doctors who work for the army and the army's trying to kill my client," Browne said. "So we have concerns about that."

No U.S. Military member has been executed in the United States since 1961.

The Army presented evidence during a pretrial hearing in November that included surveillance video, interviews with Afghan soldiers and Afghan witnesses. DNA evidence and blood samples on his rifle were also taken from the scene.

Bales allegedly admitted the killings to his fellow soldiers, and kept saying "I thought I was doing the right thing," the Army prosecution asserted.

Brown said his client suffered from undiagnosed post-traumatic stress disorder that went a long way in determing the mental health of Bales in his fourth tour of duty. He said Bales won't be able to get a fair trial unless the process is slowed down.

"Is politics driving this case? I think unfortunately it is," Brown said. "(Bales) is a strong person, I think he would agree with what I just said... he feels a bit abandoned by the army."