WHITE CENTER, Wash. – Some law enforcement officers are dedicating their time to show up for teens across the South Sound.

Badges and Barbells is a growing program in area schools where law enforcement officers are picking up weights and working out with teens. 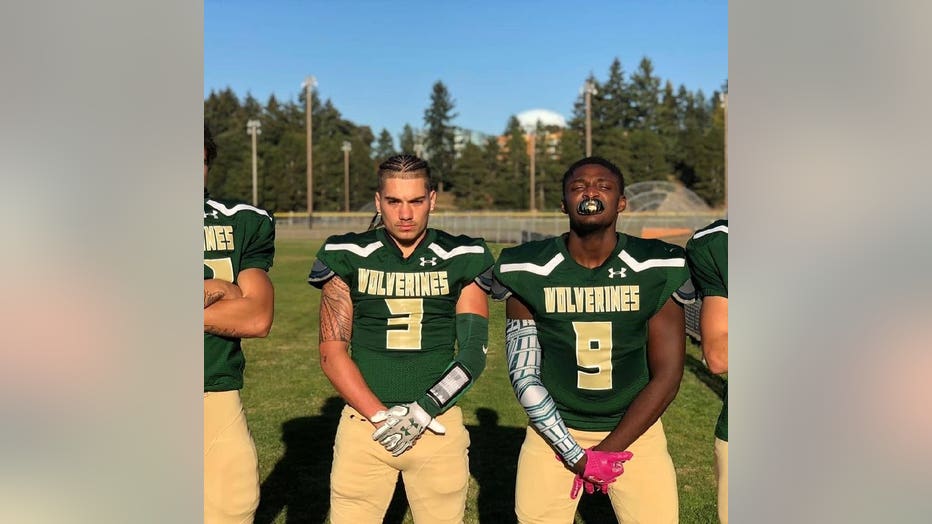 The gym is a sanctuary in an unincorporated part of King County.  White Center is an area with a tough reputation, but a history of police involvement in the community.  Now police work inside of the school through the ‘Badges and Barbells’ program.  The program was started by Covington Police Department Chief Andy McCurdy.

“As police officers, the more you can get to know during a time of calm and a time of peace like right now, the more successful we will be later if we encounter you out in the field when there’s something traumatic,” said McCurdy.

Breaking down that barrier between kid and cop didn’t come easily.

“At first, coming here from evergreen I thought it was kind of bad for us.  Something was going down,” said Jimmyt Leota.

“I was kind of nervous because you know there’s a lot negative feedback around cops so you get nervous until you actually meet them,” said Ty’Quan Holmes.

In this humble gym, police officers and deputies become coaches and mentors.

“The stuff you’re doing here is going to prepare you for life in the long run,” said King County Sheriff Deputy Andy Conner.

Conner shared stories of his glory days at Oregon and then making it to the NFL before joining the sheriff’s office.  He says he did it by staying out of trouble and putting in the hours in the gym.

“They had to kick me out of the weight room I was in two times a day,” said Conner.

Holmes wants a collegiate football career, but some of his biggest obstacles aren’t on the field.

“Getting something to eat before weight room. Most of us don’t eat because some of us don’t want lunch room food or some of us just don’t have money for lunch,” said Holmes.

‘Badges and Barbells’ can provide food, water, and stability.  It’s a constant program to look forward to.

“It was hard because we had to move around a lot and we got evicted from our house,” said Leota.

The gym transforming into a home away from home with people in the community who’ve dedicated their lives to helping others.

“I think being a cop is the best decision I ever made in my life,” said McCurdy.

Kids and cops now on one unified team with one of its leaders sharing a similar playbook of life.

He’s offering support in the gym and outside.

“By me coming in here I’m actually building a relationship with y’all and then also seeing what some of the problems that you guys are seeing. My ears are open,” said Marquez.

It allows the teens a chance to see passed their badges.

“After a while I got to meet Andy and Carlos and they’re pretty cool,” said Leota.

They’re stacking up layers of trust from both the men in uniform and the teens in sweats in a place where everyone is striving for their personal best.

The ‘Badges and Barbells’ program started at Evergreen High School.  It’s expanded to schools in Covington, Seatac, and coming soon to the Shoreline School District.  The schools operate on very tight budgets.  The equipment in the Evergreen High School gym is mostly donated.