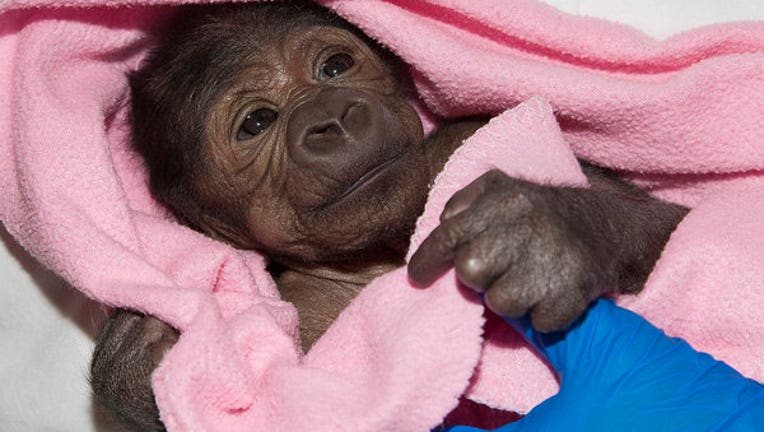 SAN DIEGO - A baby gorilla born through a rare Caesarian-section at the San Diego Zoo Safari Park underwent emergency surgery Friday for a collapsed lung and remains in the intensive care unit of the park's hospital.

Asked if the baby is expected to survive, Nadine Lamberski, veterinarian and associate director of the park's veterinary services, was cautiously optimistic. "We sure hope so," she said.

Alarmed by the baby's rapid breathing and elevated heart rate, a team of veterinary and animal care staff from the zoo, and a (human) neonatal specialist and an anesthesiologist from UC San Diego Health System, was quickly assembled for the operation.

The baby will be monitored around-the-clock and remain on oxygen and supplemental fluids, officials said.

The baby was delivered Wednesday night by C-section when veterinarians noted that the mother, 18-year-old Imani, was in distress. For a gorilla, 18 is an advanced age for motherhood; this was Imani's first baby.

Imani, at 200 pounds considered small for an adult female gorilla, is still recovering from the ordeal but is back with other gorillas.

At birth, the baby was full-term, weighing 4.6 pounds. Veterinarians were concerned that she may have been injured by Imani's lengthy labor.

Although C-sections have been done on other species at the park, the operation on Imani was the first for a gorilla.

If the baby is able to be placed with Imani, "we'll watch to see what kind of mom she is," Lamberski said.

Dr. Dawn Reeves, the neonatologist from UC San Diego, noted that the gorilla is different than other babies that she cares for.

"She can grab you with both her hands and her feet," Reeves said. "It's very difficult to release her grip because that's her instinct: to grab her mom."