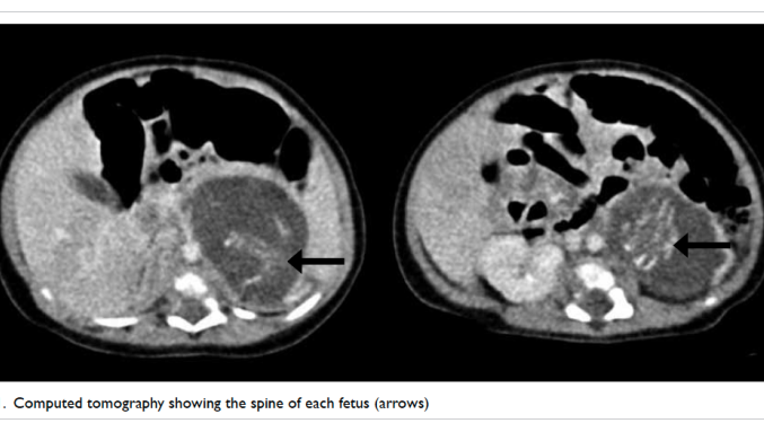 HONG KONG -- Doctors discovered a baby girl was born "pregnant" with two fetuses inside her abdomen, according to a new medical report.

The South China Morning Post reports the girl had two tumors that doctors later discovered were the fetuses of twin babies.

The baby was born in November of 2010 at Queen Elizabeth Hospital, but the report was just published in the Hong Kong Medical Journal.

The girl had to undergo surgery at just three-weeks-old to remove them. She recovered well and was able to leave the hospital eight days after the operation, doctors said.

According to the report, the fetuses were at 10 weeks gestation and each had four limbs, a spine, rib cage, intestines and brain tissue.

"It was almost impossible to detect during the prenatal check-up, as the embryo inside the baby was too small," Dr. Yu Kai-man, a former professor at Chinese University of Hong Kong, told the Post.

The condition called "fetus in fetu" is extremely rare and only occurs in 1 in 500,000 births, according to the journal. Fewer than 200 cases have been reported and documented around the world.

"Since it is impossible for the little girl to have conceived the pregnancy on her own, the fertilisation of the twin fetuses, of course, belongs to her parents, which has gone to the wrong place," Yu told the paper.

The report said the cause of the abnormality is unknown. However, the World Health Organization classifies it as a type of cancer called "mature teratoma."

"The widespread use of antenatal ultrasound in early gestation may provide more concrete evidence … and shed light on this intriguing condition," the journal concludes.