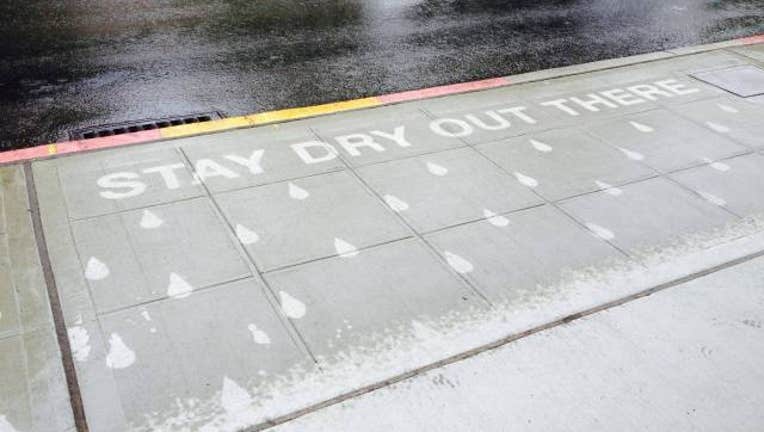 SEATTLE -- One of the highlights on Broadway is the art installation Dancers' Series: Steps. Created in the early 80s, the engraved dance steps -- showing instructions for dances from the Foxtrot to the Tango -- are a treat for anyone walking down the sidewalk. Many pause and mimic the steps. Some just catch them in a glimpse, caught by the bronze.

Peregrine Church admires the Steps and their ability to add a bit of happiness to the daily stroll.

Now Church, 21, has created what he hopes will be viewed as his own step-like art, just with a different twist.

Rather than engraved in bronze, Church uses a biologically friendly superhydrocoating to paint inspirational phrases on sidewalks only visible when it rains. So far Church has only created two pieces, but it's already gaining attention around Seattle and the Internet. Church's "Rain Activated Work" --as he calls it --  has many supporters, and he's planning his next piece.

Because what better way to cheer up the drizzle with art forming right under your eyes?

Church doesn't think of himself as an artist. Instead, he thinks of himself as someone who creates novel things. From traveling around with googly eyes in his pockets to doing magic tricks in the park, his goal is to make people smile and take them outside of their life -- just for a moment.

Church came up with the idea of Rain Activated Art as another way to make people grin. He long envisioned using some kind of coating to paint art or phrases in front of bus stops or on walls, and being able to watch as the art came alive right as the rain came down.

"I wanted to make art for suited for Seattle," he said. "And it always rains."

After a $1,000 grant from the Awesome Foundation, Church spent time researching non-toxic, safe, biodegradable coating he could spray on sidewalks with a stencil. After a couple of tests, he found a perfect solution in a coating called AlwaysDry. Invisible when dry, AlwaysDry wicks away the water, leaving the surface underneath dry when wet. The difference in contrast between wet cement and dry cement is the perfect medium to stencil simple phrases or drawings.

Church fully funds his art, and asks for no handouts from the city. And since there's plenty of wet cement in Seattle, Church has no lack of art space.

"I thought it would be fun do do all over Seattle," he said. "If people have a reason to look forward to the rain, that would be really cool. That's something special for a rainy day." 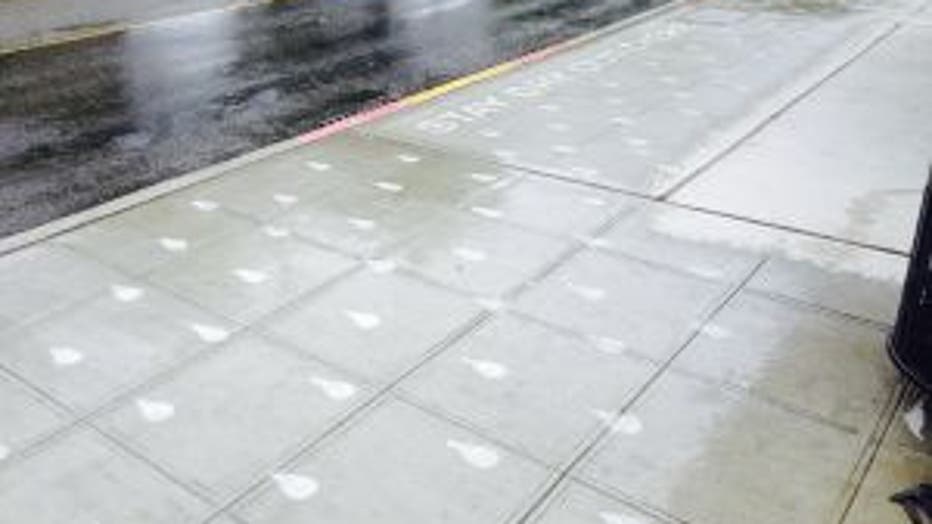 Church's first piece, stencil art that features rain drops and the words "Stay dry out there," is located in West Seattle at a California Street bus stop.  He quickly made another piece, a hopscotch outline, not far from the first.

He said most passerbys were confused, wondering why Church was taking time to spray a clear coating onto the sidewalk. Only when it rained days later did people really take notice.

"I saw a girl playing hopscotch on my second one," Church said. "That was pretty special."

But only after Church posted a timelapse video and pictures of his artwork on Reddit did his work truly gain notice. People loved his Rain Activated Art, and threw out many suggestions for his next piece.

"It gained attention," he said.

Next, Chuch plans to draw an Orca or seal near Seattle's waterfront. Soon, he hopes to dot the city with inspirational quotes and little pictures, only visible when it rains. He hopes people notice the pieces together, enjoying the novelty together.

"If two strangers see something novel together, it makes them more likely to strike up a conversation," Church said. "Anything to combat the Seattle freeze."