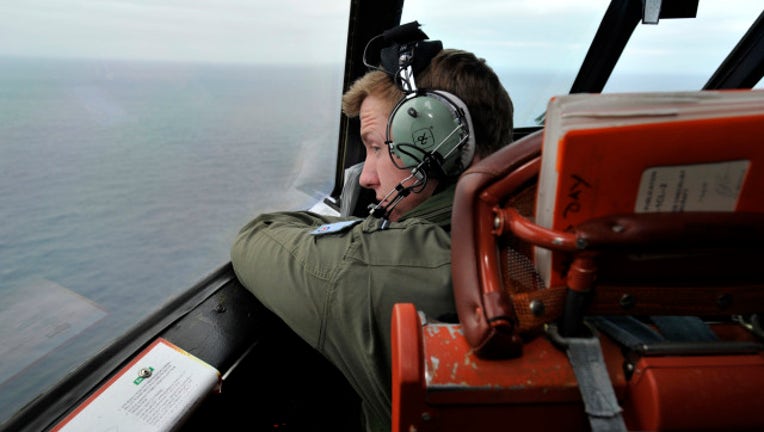 Australian authorities said Friday they had called off their search for the day for two mystery objects that may or may not be parts of missing Malaysia Airlines Flight 370.

Military surveillance planes, a commercial jet and two merchant ships combing the area failed to find any trace of the objects, which were spotted Sunday by a satellite in the treacherous waters of the southern Indian Ocean. The spot is more than 1,400 miles from the west coast of Australia.

Flight 370 vanished 14 days ago with 239 people aboard. The announcement Thursday by Australian officials that they had spotted something raised hopes of a breakthrough in a frustrating search that has yielded few clues about what might have happened to the plane after it stopped communicating with the ground, appeared to veer wildly off course then dropped out of sight for good.

On Friday, Australian Prime Minister Tony Abbott defended the decision to announce the find, saying that Australia owes it to families of those missing "to give them information as soon as it's to hand."

As he had Thursday, Abbott warned again that the two objects may not be from the plane.

"It could just be a container that has fallen off a ship," he said during a visit to Papua New Guinea. "We just don't know."

On Friday, Hishammuddin Hussein, Malaysia's interim transportation minister, tried to reset expectations for a quick resolution to the mystery surrounding the plane.

Conditions for the southern Indian Ocean search have improved since Thursday, said John Young, emergency response manager for the Australian Maritime Safety Authority. Flight crews were able to search for the objects visually rather than using radar, he said.

"That's encouraging," he said. "But we have no sightings yet."

Given the distance from Australia to where the objects were spotted by the satellite, aircraft had about two hours in the search area before having to return to base.

Patrol aircraft may have to repeat flights like those taken Thursday and Friday "a few times" before authorities can be confident they've covered the whole area, he said.

The United Kingdom was sending the HMS Echo to the scene to aid a growing international flotilla searching the southern Indian Ocean. The ship is an ocean surveying vessel, according to the UK Defense Ministry website.

Australia is sending a ship, the HMAS Success, and Chinese and Malaysian vessels are also steaming to the area to join a massive Norwegian cargo ship diverted there Thursday at the request of Australia.

Along with the naval vessels and military patrol aircraft, a motley collection of merchant ships are heading to the search area, where they will join the Norwegian merchant vessel.

The sailors aboard the Norwegian ship worked throughout the night looking for the objects, said Erik Gierchsky, a spokesman for the Norwegian Shipowners Association.

If the objects are determined to be debris from Flight 370, experts say that search teams may then use locators to try to find pings coming from the plane's flight data recorder.

Hishammuddin tweeted Friday that the search and rescue teams working across a wide area of the Indian Ocean are in need of the locators, also known as hydrophones. He said not many countries have them.

Hishammuddin said his country had asked for specialized assets from the United States, including remotely operated submersibles, to aid in the search and eventual recovery.

The batteries that power the signaling device are designed to last at least another 16 days. The president of the company that believes it manufactured the pinger, Dukane Seacom Inc., said the device will probably work for at least a few days beyond that.

But one expert warns that the depths of the Indian Ocean will complicate the search.

"At this water depth, the range is very limited on listening to those pingers," said Mike Williamson, who runs a Seattle engineering firm specializing in deep-sea searches of planes and shipwrecks.

Countries from central Asia to Australia continue to search for the plane along an arc drawn by authorities based on satellite pings received from the plane for hours after it vanished. One of those arcs tracks the southern Indian Ocean zone that's the focus of current attention.

The other tracks over parts of Cambodia, Laos, China and into Kazakhstan, where authorities said Thursday they had found no trace of the plane.

Hishammuddin said Friday that Malaysian authorities were awaiting permission from Kazakhstan's government to use the country as a staging area for the northern corridor search.

That clearly signals that Malaysian authorities are not ready to give up on the possibility the plane could still be found far from the focus of current search efforts.

Malaysian authorities say they believe that the missing plane was deliberately flown off course during its scheduled flight from Kuala Lumpur to Beijing. But they haven't so far found any clear evidence to indicate who might have changed the plane's path and why.

The pilot and first officer of the plane have come under particular scrutiny, especially in light of information suggesting a sharp turn in the flight path had been programmed into the plane's flight management system before one of the pilots gave a routine sign-off to Malaysian air traffic controllers.

Question marks remain over data that authorities say was deleted from the hard drive of a flight simulator found at the home of the plane's pilot, Capt. Zaharie Ahmad Shah.

On Thursday, a U.S. official familiar with the investigation told CNN that an FBI team is confident that it will be able to retrieve at least some of the deleted files.

Investigators will also analyze websites that Zaharie and the first officer, Fariq Ab Hamid, may have visited recently, the official said on the condition of anonymity.

Passengers also continue to be investigated. On Friday, Hishammuddin said Ukraine told Malaysia that background checks on its citizens aboard the plane had come back clear.

The length of the search and the often frustrating lack of information have left many family members angry. Some have accused Malaysian officials of withholding information, or at the very least failing to update them.

For the first time since the plane disappeared, Malaysia sent a high-level delegation to Beijing to brief relatives who had opted not to travel to Malaysia to wait out the search.

Hishammuddin said the 3½-hour meeting went as well as could be expected, given the lack of information about what happened to the plane.

"Although we answered most of the questions they raised, we could not answer them all," he said.

"The one question that they really want to know is the answer to which we do not have," he said, "which is: 'Where are their loved ones, and where is the airplane?'"

Selamat Omar, whose son was on board the plane, told CNN's Kate Bolduan that the wait for answers has been agonizing.

"I do feel sad, it's been 14 days," he said. "I'm still waiting for answers from the government. The sadness is still there, but I'm just going to stay strong."

Omar's son, Khairul Amri, has attracted the attention of authorities because of his experience as a flight engineer. Omar said authorities have not contacted him and he is confident his son had nothing to do with the plane's disappearance.