ST. LOUIS – In a presidential debate filled with nasty remarks and insults, audience member and uncommitted voter Ken Bone became an internet sensation after posing a question to the candidates.

"What steps will your energy policy take to meet our energy needs while at the same time remaining environmentally friendly and minimizing job loss for fossil power plant workers?" he asked Hillary Clinton and Donald Trump. 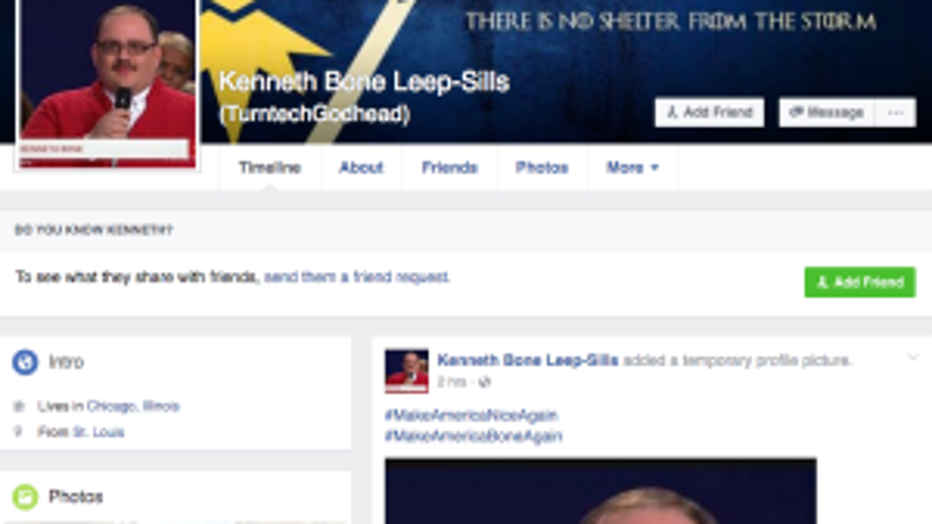 While Bone's question was well-intentioned, his overnight fame was fueled by his snazzy red sweater, white shirt-tie combination, his thick mustache, his disposable camera and of course, his catchy name, according to social media.

#KenBone became a top trending topic on Twitter with more than 94, 000 tweets mentioning him as of early Monday.  On Facebook, his name was also among the most talked about topics.

A Facebook user with the name Kenneth Bone Leep-Sills and similar appearance to the distinguished audience member quickly embraced the attention on his account, updating his profile picture with a snapshot of Sunday evening's debate.

Social media continued to praise Bone through the night, some even calling him the hero of the political showdown.

Donald Trump will live to fight another day -- but it took the nastiest, most bitterly personal presidential debate in recent memory for the Republican nominee staunch the downward plunge.

Trump's campaign was in free fall when he entered the debate hall Sunday night, reeling from the revelation of a 2005 video in which he spoke of women in lewd and sexually aggressive terms. The video sparked a dramatic rebuke of Trump, with dozens of Republicans in Washington and around the country saying the billionaire should step aside and let his running mate, Indiana Gov. Mike Pence, lead the GOP ticket.

The icy tone was set early when decades of tradition eroded as Trump and Clinton declined to shake each other's hand.

Trump fought back in the only way he knew how -- throwing out a battery of vicious counter punches. He vowed to prosecute Clinton if he is elected, and then throw her in jail. With her husband and daughter in the audience, Trump branded Bill Clinton a serial abuser of women hours after appearing alongside several women who allege the former president assaulted them.

Trump seemingly dismissed the significance of the vulgar language he was caught on tape using toward women a decade ago, apologizing for his conduct but repeatedly saying his remarks were just "locker room talk" that did not reflect his real character.

Clinton, however, said that incident did provide a true picture of Trump's character. She spoke of her years fighting Republicans on policy but said she never questioned their fitness to serve as president until now.

In the process, it seemed as if American politics changed in the course of one nasty night. The once sacred tradition of a presidential debate -- where candidates typically trade barbs over their vision of the country's future instead of personal humiliations -- exploded into something quite chilling.

Trump glowered, interrupted, and prowled the stage at Washington University in St. Louis, calling Clinton a "devil" and "liar" with "hate in her heart." The performance likely electrified his fiercely loyal supporters but may have done little to widen his appeal among more moderate swing state voters.

A CNN/ORC poll found 57% of debate watchers thought Clinton won compared to 34% who thought Trump came out on top. The poll only represents the views of people who watched the debate and has a slight Democratic advantage compared to CNN polls of all Americans.