Attorney General William Barr, one of President Donald Trump’s staunchest allies, is resigning amid lingering tension with the president over the president’s baseless claims of election fraud and the investigation into President-elect Joe Biden’s son.

“Just had a very nice meeting with Attorney General Bill Barr at the White House. Our relationship has been a very good one, he has done an outstanding job!” Trump wrote on Twitter.

In a letter sent from the Office of the Attorney General posted on Twitter by Trump, Barr wrote, “I am greatly honored that you called on me to serve your Administration and the American people,”

Barr in his resignation letter said he updated Trump Monday on the department's “review of voter fraud allegations in the 2020 election and how these allegations will continue to be pursued." He added that his last day on the job would be Dec. 23.

Despite Trump’s obvious disdain for those who publicly disagree with him, Barr had generally remained in the president’s good graces and has been one of the president’s most ardent allies. Before the election, he had repeatedly raised the notion that mail-in voting could be especially vulnerable to fraud during the coronavirus pandemic as Americans feared going to polls.

But in the wake of the election, Barr said the Justice Department had not uncovered evidence of widespread voter fraud that would change the outcome of the 2020 presidential election.

“To date, we have not seen fraud on a scale that could have affected a different outcome in the election,” Barr told the Associated Press.

Trump has yet to prevail in court despite the many lawsuits he and the GOP have filed in several states.

Barr, who was serving in his second stint as attorney general, sought to paint himself as an independent leader who would not bow to political pressure. But Democrats have repeatedly accused Barr of acting more like the president’s personal attorney than the attorney general, and Barr had proved to be a largely reliable Trump ally and defender of presidential power.

Before releasing special counsel Robert Mueller’s full report on the Russia investigation last year, Barr framed the results in a manner favorable to Trump even though Mueller pointedly said he couldn’t exonerate the president of obstruction of justice.

He also appointed as special counsel the U.S. attorney who is conducting a criminal investigation into the origins of the FBI’s probe of the 2016 election that morphed into Mueller’s investigation of possible Trump-Russia cooperation, following Trump’s repeated calls to “investigate the investigators.” 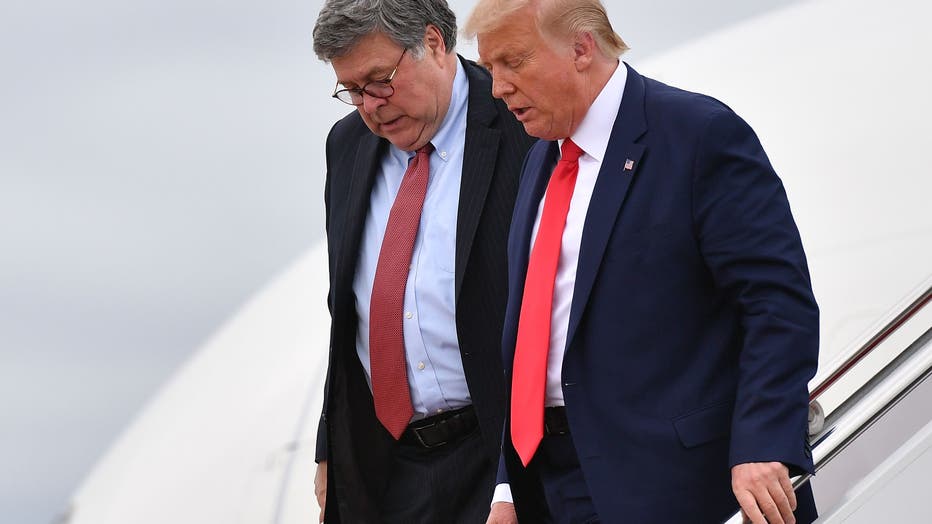 US President Donald Trump (R) and US Attorney General William Barr step off Air Force One upon arrival at Andrews Air Force Base in Maryland on September 1, 2020. (Photo by MANDEL NGAN/AFP via Getty Images)

Barr also ordered Justice Department prosecutors to review the handling of the federal investigation into Trump’s former national security adviser Michael Flynn and then sought to dismiss the criminal charges against Flynn, who had twice pleaded guilty to lying to the FBI. Trump later pardoned Flynn.

Trump has publicly expressed his anger about Barr’s statement, and his break from Trump over election fraud wasn’t the first. Earlier this year, Barr told ABC News that the president’s tweets about Justice Department cases “make it impossible for me to do my job.”

In the letter tweeted Monday by Trump, Barr said that he would “spend the next week wrapping up a few remaining matters important to the Administration.”