LONDON (CNN) -- They first hit the man, thought to be a British soldier, with a car in broad daylight. Then the two attackers hacked him to death and dumped his body in the middle of a southeastern London road. 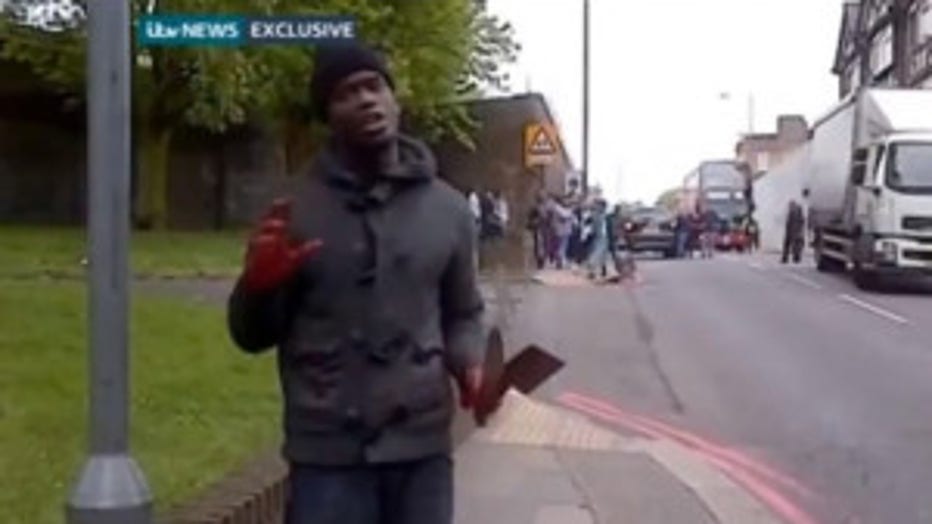 As the victim -- dressed in what appeared to be a T-shirt for Help for Heroes, a charity that helps military veterans -- lay prone, one of the two attackers found a camera.

"We swear by almighty Allah we will never stop fighting you until you leave us alone," said a meat-cleaver-wielding man with bloody hands, speaking in what seems to be a London accent.

"The only reasons we killed this man this is because Muslims are dying daily," he added, in video aired by CNN affiliate ITN. "This British soldier is an eye for an eye, a tooth for tooth."

One witness, Michael Atlee, described the gruesome, frenzied and ultimately fatal sequence of events Wednesday afternoon as "a bloody mess."

"We will never buckle to terror," Cameron wrote on Twitter.

Home Secretary Theresa May offered a similar assessment Wednesday night of the situation and a similar message of resolve.

"We have seen terrorism on the streets of Britain before, and we have always stood against it," she said. "Despicable acts like this will not go unpunished."

A witness, who identified himself only as James, told London's LBC 97.3 radio station that he saw two men standing by the victim, who was on the ground in the British capital's Woolwich neighborhood.

At first James thought they were trying to help the man. But then he saw two meat cleavers, like a butcher would have.

"They were hacking at this poor guy, literally," he told the radio station, as if they were trying to remove his organs.

Afterward, the men appeared to want to be filmed, with one of the attackers going over to a bus and asking people to take photos of him as if he wanted to be on TV.

A man who asked not to be identified told ITN that he was on his way to a job interview when he came up on the scene and started filming it. Then, a man with a cleaver and knife in his bloody hands "came straight to me (and) said, 'No, no, no, it's cool. I just want to talk to you.'"

The suspect went to apologize to women who had witnessed the attack, then quickly added "but in our lands our women have to see the same."

"You people will never be safe," he said. "Remove your government. They don't care about you. You think David Cameron is going to get caught in the street when we start busting our guns?

"... Get rid of them. Tell them to bring our troops back so we can all live in peace."

The first call about an assault came in at 2:20 p.m. (9:20 a.m. ET). At some point afterward, police responded, including armed members of a firearms unit, even though British police typically don't carry guns.

The suspects rushed at the arriving officers before being shot, James told the radio station. The Independent Police Complaints Commission said the Metropolitan Police informed them at 2:50 p.m. of "an incident," as would happen when police shoot and injure someone.

Letchworth said both suspects were taken to separate London hospitals for treatment. Metropolitan Police Commissioner Bernard Hogan-Howe later said the two had been arrested, though it wasn't immediately clear if this happened at the hospitals or elsewhere.

"We understand concern about the motivation, and we will work tirelessly to uncover why this occurred and and who was responsible," Hogan-Howe said, adding that his force's counterterrorism unit will lead the investigation. "I understand people want answers, but I must stress we are in the early stages of investigations."