Cairo (CNN) -- An eerie calm descended over Cairo early Thursday, following the bloodiest day since the revolution two years ago that was envisioned to bring peace and democracy to Egypt -- but has not.

The violence Wednesday pitted Egypt's military and current government against backers of deposed President Mohamed Morsy, though others also were caught up in the fray.

"It's an open war," said one protester who managed to escape one of two Cairo camps raided Wednesday. 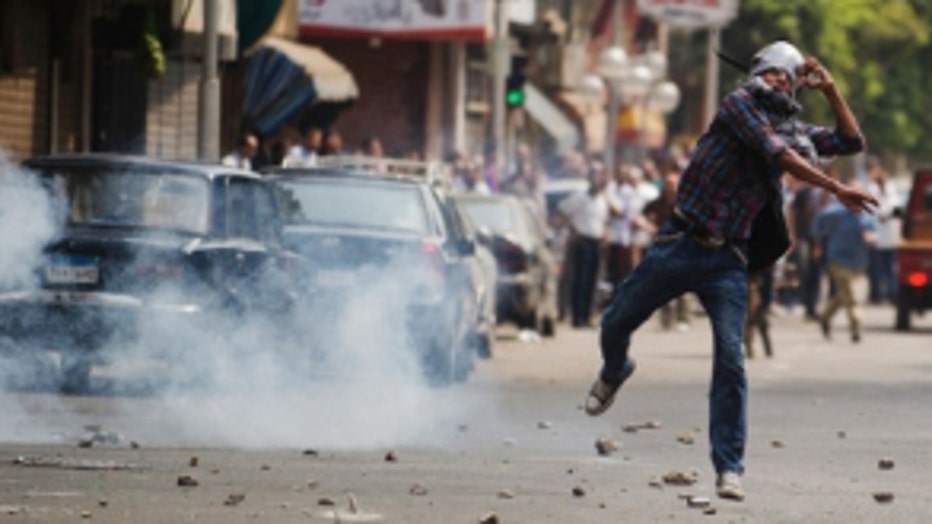 The 2011 revolution that led to the ouster of Hosni Mubarak, who kept a firm grip on power for 30 years, was followed by Egypt's first democratic elections. Morsy -- a leader of the Islamist group the Muslim Brotherhood -- won the presidency after that 2012 vote, but was forced out by the military last month.

Taken into custody immediately, Morsy hasn't been seen since. Yet his supporters have very public in voicing their opinions, massing on the streets of Cairo and elsewhere to slam military leaders that ousted their leader and demand his return to the presidency.

Egypt's government had given no indication it would back down, criticizing elements of the protest movement and specifically ordering them to leave two spots where they'd been gathering in Cairo for six weeks, or else they'd force them out.

On Wednesday, they did.

The story of what exactly transpired -- who attacked whom, who opened fire, who was to blame -- varied 180 degrees depending on where one stood in the debate over Egypt's past, present and future.

On the one side, there were Morsy supporters, one of whom accused the government forces of waging a "full-on assault" on what they said had been, to-date, peaceful demonstrations. On the other, there were those like Ibrahim, who professed to being "surprised" by the "Muslim Brotherhood's (decision) to attack the security forces."

What couldn't be mistaken was the chaos, the bloodshed and the sense -- even with Prime Minister Hazem Elbeblawi's pledge "we hopefully will rebuild our nation" -- that the already volatile situation in Egypt could be getting even worse.

"I think what we're seeing right now is just the beginning of what is promising to be a very, very long and bloody battle as the interim government and the security forces try to regain control of the streets," CNN's Arwa Damon reported from Cairo.

By midnight Wednesday, much of Egypt was quiet -- a byproduct of a curfew declared through 6 a.m. Thursday in several provinces, including Cairo, Alexandria, Giza and Suez.

The government on Wednesday, according to state TV, issued a month-long state of emergency. This a loaded term in Egypt, given that Mubarak long ruled under such a decree that barred unauthorized assembly, restricted freedom of speech and let police jail people indefinitely.

The prime minister said the government felt compelled to act in order to ensure stability, praising security forces for their "calm" and claiming some in the anti-government camp's had weapons and artillery.

"We are here to build a democracy based on justice," Elbeblawi said. "... We have to reason and use common sense. We are all part of this nation."

Yet not everyone expressed faith in his government, which came under criticism not just from Muslim Brotherhood backers.

Mohammed ElBaradei -- a secular leader who had unsuccessfully ran against Morsy, then became one of his biggest critics before joining the government that replaced his -- resigned Wednesday as vice president of foreign affairs, state-run Nile TV reported.

The European Union's top diplomat, Catherine Ashton condemned the violence, urging "security forces to exercise utmost restraint and on the interim government to end the state of emergency as soon as possible, to allow the resumption of normal life."

In light of the ongoing violence, the United States is considering canceling next month's planned biennial military training exercise with Egyptian forces, an official in President Barack Obama's administration said.

"The path toward violence leads only to greater instability, economic disaster and suffering," he said.
State of Emergency in EgyptBegins at 4pm local time on August 14Declared by the interim president for a month

Police can detain people for extended periods of time

A curfew imposed in Cairo and other provinces

It was was lifted after the ouster of President Hosni Mubarak

Morsy's government declared a limited state of emergency in January 2013


'They're prepared to die'

For weeks, the two makeshift Cairo protest camps had become cities unto themselves -- with people sleeping in tents, vendors hawking everything from haircuts to masks, and children playing in inflatable castles and splashed in kiddie pools.

At dawn on Wednesday, they came under siege.

Security forces came in, bulldozing tents and escorting away hundreds. Some mothers and fathers managed to whisk away their children, gas masks on their faces.

Within three hours, the smaller camp -- Nahda, near Cairo University -- was cleared, except for shreds of torn-down tents that remained.

But the larger protest, near the Rabaa al-Adawiya mosque in eastern Cairo, proved trickier, with forces facing heavy resistance. The military called in special forces.

Chaos ensued. Many protesters refused to leave, even in the face of bulldozers and surrounded by the injured and dead. "They said they're prepared to die," CNN's Reza Sayah reported.

Along with smoke, bursts of rapid gunfire continued to fill the air. It was unclear who had the weapons, and who was shooting at whom. People could be heard wailing.

State TV reported that snipers from the Muslim Brotherhood -- Morsy's party -- were exchanging gunfire with Egyptian security forces near a university building.

Sky News cameraman Mick Deane was killed, the UK-based news channel reported. Deane had worked for Sky for 15 years -- and for CNN well before that. The rest of his team was unhurt.

Reuters photojournalist Asmaa Waguih was shot and wounded Wednesday covering the clashes, the news agency told CNN. She was being treated in a hospital.

And Habiba Abdel Aziz of Gulf News, who was in Egypt in a personal capacity having celebrated the Eid holiday, was also killed, editor-at-large Francis Matthew told CNN.

'Walking on the blood of the victims'

Visiting makeshift hospitals, a CNN crew was "literally walking on the blood of the victims," Sayah reported.

Security forces pushed doctors out of one hospital at gunpoint, a witness told CNN.

Ibrahim, the interim interior minister, claiming that armed protesters were the aggressors -- including trying to storm police stations, the Ministry of Finance building and other targets in Cairo.

Naguib Sawiris, an Egyptian billionaire who helped found the anti-Morsy Free Egyptian Party, said his party had video of Muslim Brotherhood members "shooting machine guns on civilians, on police. So anyone who wants to call this a peaceful demonstration would be wrong."

But Ahmed Mustafa, a Muslim Brotherhood spokesman, told CNN from London that Sawiris was trying to misrepresent video of masked people with weapons.

Besides claiming they'd been shot at, the Muslim Brotherhood also accused police were throwing Molotov cocktails at makeshift clinics.

Yet Ibrahim said government forces had done what they could to limit casualties, with his ministry insisting, "Egyptian security forces are committed to the utmost self-restraint in dealing with the protesters."

Rather than uniting Egypt after Mubarak's fall, divisions remained rife -- and, in some ways, intensified -- in the Middle Eastern nation during Morsy's time as president.

Critics accused him of being authoritarian, trying to force the Brotherhood's Islamic agenda, not being inclusive and failing to deliver freedom and justice.

'Nail in coffin' for Arab Spring?

The military coup to dismiss him, they said, was necessary since Morsy didn't fairly represent all Egyptians. So, too, were the efforts to force his supporters off the streets.

"We believe in human rights," said Shehab Wagih, a spokesman for the Free Egyptian Party speaking in favor of the military. "But at the same time, we cannot accept the idea of having a state inside a state."

Morsy's backers, meanwhile, accuse the military -- and the government it appointed -- of undermining the people's will, as expressed at the polls. The deposed president wasn't given a fair chance, they say, and his supporters have been unfairly targeted for trying to express their opinion.

In an interview Wednesday with CNN, Abdul Mawgoud Dardery of the pro-Morsy Anti-Coup National Alliance blamed "corrupt elements" in the Egyptian army, calling their actions a "crime against humanity" and "state terrorism."

"All presidents make mistakes, but you don't have the army to remove them," Dardery said. "... What are we telling to the rest of the Arab world, the Muslim world -- that bullets are better than ballots?"