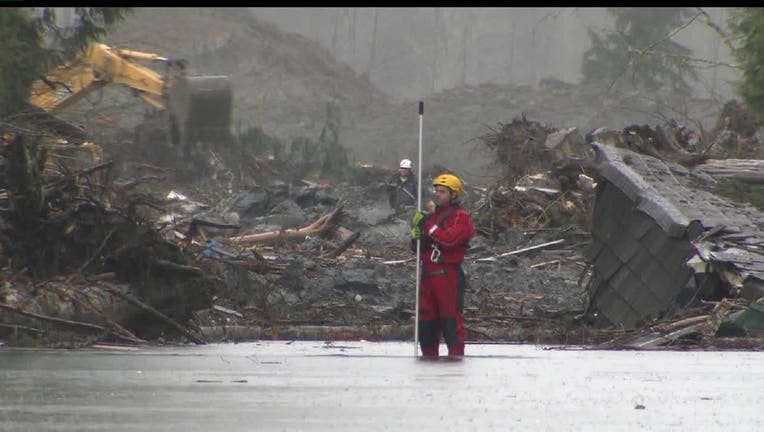 One of the searchers stands in a pond created by heavy rain as others look for victims in the muck near Oso Friday. (Photo: KCPQ-TV)

ARLINGTON, Wash. -- At least one more victim was found Friday in the Snohomish County mudslide as more than 200 searchers scoured the 1-square-mile debris field in heavy rain, thick muck and "quicksand" six days after the massive slide struck. Ninety people were still listed as missing.

Gary Haakenson, the county's executive director on public safety issues, told reporters at a briefing Friday night that the official death toll remained at 17, the same as it did the night before, and that bodies found in the debris field would not be added to the total until the medical examiner's office identified the fatalities.

"The identification process has been very, very challenging," Haakenson said.

The force of the mudslide -- with an estimated volume of 6 million to 7 million cubic yards and traveling as fast as a train -- shredded and twisted cars and other vehicles, turned at least 35 homes into kindling, split State Route 530 in two and dammed the North Fork of the Stillaguamish River. Bodies were said to be mangled.

The mudslide roared down into the valley near the tiny rural town of Oso, about 55 miles northeast of Seattle, last Saturday morning, March 22, when many people were believed to be in their homes.

More than 200 people, and specially trained dogs, are searching for victims. Officials said the dogs have been the most help in finding victims.

On Friday, Gov. Jay Inslee called on everyone in Washington state to observe a moment of silence this Saturday at 10:37 a.m. -- the time the mudslide hit the area -- to honor the victims, the missing and the grieving families.

“I know that every Washingtonian holds in their heart the people of the Stillaguamish Valley and we all wish we could ease their pain,” the governor said. “Tomorrow morning, we can all join together and silently send our thoughts and prayers to the families of Oso.”

At the Friday night briefing for reporters in Arlington, Haakenson tried to address the frustration of reporters, family members and others over few updates on the official death toll when some county officials had said that many more bodies were being found in the debris field.

"I have shared the frustration on the number being a moving target over the last six days.," Haakenson said.

He explained that when a victim is found in the field, the position is marked for a helicopter pickup. But he noted helicopters "can't fly all the time." When the victims are extracted, they are transported at night to the county medical examiner's office in Everett, where autopsies are performed and the victim is identified. After family members are notified, then the victim is added to the official death toll.

"This morning the total is still 17" dead, he said. "Now, the operations folks made me aware this afternoon that they did locate one more victim in the debris field, but we are not including that in the total until they reach the medical examiner's office."

Responding to a question, Haakenson said, "I believe that the crews are finding bodies in the field. It’s a very, very slow process. It was miserable to begin with … and it’s rained heavily the last few days. It's made the quicksand even worse. I cannot possibly tell you how long this will last or when, or if, they will find more bodies. We hope that we do. But now, there’s no telling."

The mud from the slide is said to be up to 40 feet deep in places.

"We always want to hold out hope (for survivors), but I think that at some point we have to expect the worst," Haakenson said.

Mayor Barbara Tolbert of the nearby city of Arlington also addressed the briefing and said they were grateful for the support they have received.

"The way that the world has wrapped its arms around our communities and reached out to us is giving us hope and strength," Tolbert said. "We ask that you continue to keep us in your hearts."

She said she was also concerned about the local volunteers who had jointed the search.

On Friday, President Obama had approved an amended federal emergency declaration for the area that will reimburse local and state agencies and nonprofit organizations for 75 percent of eligible costs. And a Colorado National Guard fatality recovery unit was scheduled on Saturday to fly in and join members of the Washington National Guard in the search for victims.

Seattle's Harborview Medical Center said five patients who were injured in the mudslide were improving, including a 5-month-old boy who was upgraded to serious from critical condition and who was now breathing on his own.

Mental health services were set up for victims, families and anyone else affected by the slide. A crisis care hotline was set up at 800-584-3578. A family assistance center opened for family members who had lost a loved one. And donations centers in Arlington continued to take in food, clothes and cash donations.