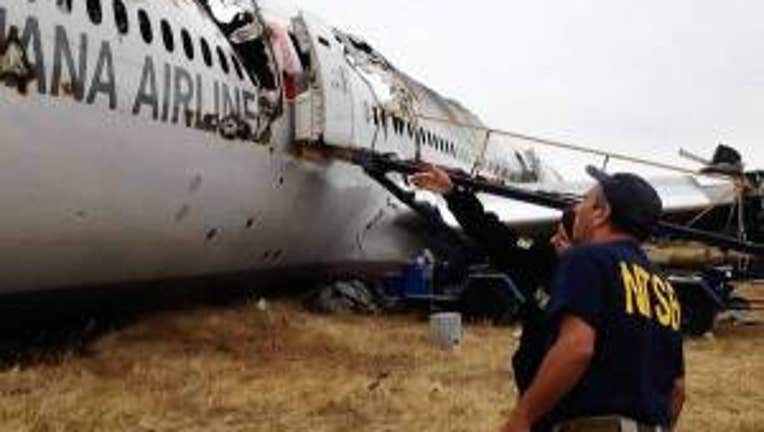 Washington (CNN) -- The first officer aboard Asiana Flight 214 told investigators that he called out the plane's excessive sink rate -- its rate of descent -- "more than four times" in the two minutes before the plane crashed, according to information released by the National Transportation Safety Board on Wednesday as it began a marathon 11-hour hearing into the July accident in San Francisco, which killed three Chinese teenagers.

First Officer Bong Dongwon -- who was sitting in a jump seat behind Capt. Lee Kang Kuk, a trainee, and instructor Lee Jungmin -- said the plane was making a steeper descent than the allowable 1,000 feet per minute, so he alerted the pilots, calling out the sink rate.

But he did not say anything more because they appeared to be correcting the sink rate, Bong told investigators.

"Since Bong advised of high sink rate several times, he was monitoring sink rate and saw that it was decreasing, '1,500, 1,400, going up,'" a summary of the interview says. "When he recognized this correction was going on, and after passing 500 feet, seeing the vertical speed was less than 1,000 (feet per minute), he decided not to advise anything."

Aircraft normally must have a stabilized approach at 1,000 feet of altitude before landing, but the interviews suggest the plane's speed and sink rate were both incorrect as it passed through critical points of its descent.

A cockpit voice recorder transcript released Wednesday showed the pilot gave three "sink rate" warnings in succession about 52 seconds before impact -- the first two times in English, and the final time in Korean.

The NTSB is focusing on what it says may have been the pilot's overreliance on autopilot and other automation on the sophisticated Boeing 777 aircraft.

Investigators asked the three-pilot crew about their understanding of auto-thrust, which controls the plane's power. The NTSB has previously said the pilots believed the auto-thrust was engaged, but it was not.

The NTSB documents suggest two concurrent problems: The plane was descending too fast, and its forward speed was too slow.

And the NTSB had earlier said pilots were adjusting for yet another problem in the seconds before the crash: The plane was not lined up with the runway's center line.

The pilots made their first reference to the plane's speed problem just seven seconds before the crash. The pilot called out a "go around" -- a command to abort the landing -- three seconds before impact.

Information released at the opening of Wednesday's hearing also shows that investigators are concerned about the role Korean and airline culture played in the crash.

Bong said the crew practiced "cockpit resource management," training that encourages subordinates to speak up about safety concerns to other crew members, despite their senior rank, experience or seniority. But when the student captain was asked whether he had contemplated an aborted landing as the plane descended, Lee Kang Kuk said it was a "very hard" decision to make, given the deference shown in Korean culture.

By the time he pushed the throttle forward, just seconds before impact, he discovered the instructor pilot had already done so.

Culture also kept the pilot flying from wearing sunglasses, the interviews suggest. That was a factor momentarily when the student captain saw a flash of light as the plane descended through 500 feet.

"Asked whether he wore sunglasses in the cockpit he said no, because it would have been considered impolite for him to wear them when he was flying with his PM. He said it was very important in their culture," the NTSB report says.

The NTSB has said the pilot did not believe the flash of light was a factor in the crash, saying it was momentary and that the pilot was still able to see the controls.

Three passengers died in the July 6 accident -- two in the crash, and a third who was killed by a foam truck that had responded to the scene. The accident was the first fatal commercial airline crash in the United States since February 2009.

NTSB Chairman Deborah Hersman called that record "a testament to the steadily improving safety of commercial aviation," but said there are lessons to be learned.

"We will focus not only on the human-machine interface in highly automated aircraft, but also on the emergency response and cabin safety," Hersman said.

Several hundred people packed the NTSB's hearing room in Washington, and others gathered at a viewing room near San Francisco.

But survivor Ben Levy told CNN he was forfeiting an opportunity to watch the proceedings.

"I think something that I've done quickly after this plane crash has been to focus on work and family and things that matter to me," Levy said. "I'm extremely happy that something is being done to get to the bottom of what happened that day because it should not have happened."