SEATTLE -- Pride weekend in Seattle is a city-wide affair. From coffee shops to libraries, street corners to Q13 FOX News This Morning TV sets, the question is simple:

“What are you doing for Pride?”

No description of what Pride is, what it means to the city. A question as important and annual as “What are you doing for the 4th?”

It seems a bit odd, then, to learn that for the first time in Pride’s 41-year history in Seattle, rainbow flags will be flown on some of the city's most iconic emblems. From 5 a.m. Friday until 11:59 p.m. Sunday, the symbol of so much will adorn the Bremerton and Bainbridge bound ferries routes. Just beneath the American Flag.

Ian Sterling, a public information officer at Washington State Ferries, explains the decision to fly the flags on the ferries much like so many other Seattleites explain their plans for Pride. Pride is in the start of the summer. With solstice, Fourth of July, graduations and other fun events, Pride has the ability to come up quick.

Fly the flags, Ian asks. Sure! How have we never thought of that before?

“The organizer of the Pride Festival (Marc Ackerman) reached out to us,” Ian said. “We said of course. If he could provide the flags, we’d fly them.”

No hand-wringing over potential political implications. No fear to show support for a cause that some – in other parts of the country – may consider obscure. A government entity flying the Pride flag without question, only hesitating to ask why it hasn’t happened before.

In a bit of coincidence, Bainbridge native Tone Stowers and his fiancé Jason Coats are getting married on the 8:10 a.m. sailing to Seattle this weekend. Growing up here, Stowers has fond memories of falling asleep on the ferries, waking up on the boat after a late-night trip or running late to the docks.

Stowers and Coats decided these memories, along with the sun setting on a summertime boat over the Sound, made for the perfect place to say “I do.” 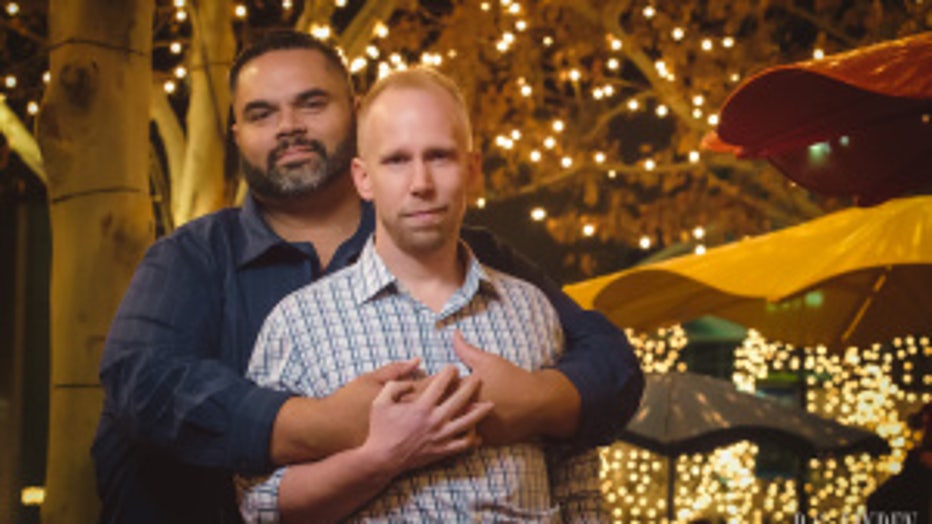 Jason and Tone prepare for their wedding this weekend.

The Pride flags being flown for the first time above them on the Kitsap and Hyak ferries, Coats said, was just a fun happenstance.

“We heard that,” Coats said, talking about the flags. “We thought it was kind of perfect with all the things happening together.”

Coats and Stowers also decided to get married here because of the legal cloudiness of getting married in Kansas City, where they both live.

Prior to today's landmark Supreme Court decision, the legality of their marriage was vague at best. On the Missouri side of the metropolitan area, same-sex marriages were recognized when performed in jurisdictions that don't outlaw gay marriage. On the western side of Kansas City, over the state line into Kansas, same sex marriage was not recognized, and banned for a time with an amendment.

Though the Supreme Court decision will undoubtedly add some clarity to the laws, the clarity may not come as quick in some residents.  While ferry operators here question why it took so long to fly the Pride flag (Why didn’t think of that sooner???), others in Kansas and Missouri still approach gay marriage with trepidation.

Discussing wedding plans in Kansas City was sometimes done in hushed tones, Coats said. What will this florist say, will a venue support it?

“It’s kind of a breath of fresh air to have so much support here,” Coats says. “It’s exciting to be in a place that’s so supportive of it.”

Above all, Coats and Stowers are just happy to be surrounded by their families and in a setting they find beautiful as they prepare their nuptials for Saturday. Sure, the Pride flags flying above will be an awesome gesture, a reminder of how far Seattle has come, and how far this country and Seattle still have to go.

But all those ideas. sometimes grandiose and hard to grasp, can, just like the notion of Pride week, easily slip away as life sails on.

“Just the idea of getting married on the water seemed really, really special to us,” Coats said, explaining the sights of Sound and the Olympics; the Emerald city. “It’s going to be an awesome weekend."

For more on this weekend's Pride events, click here.