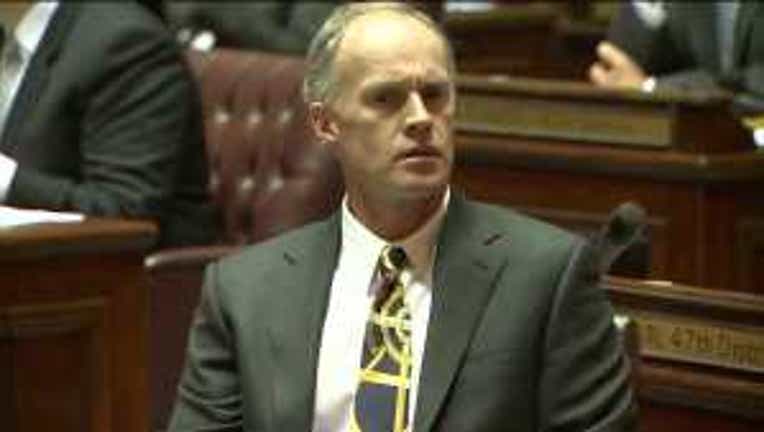 Sen. Rodney Tom of Medina, a Democrat who crossed party lines to give the GOP control in the Senate, is shown during the opening session of the Legislature.

OLYMPIA -- A Republican-led coalition formally took over control of the state Senate as the new Legislature opened its session Monday.

It was a very tense first day in the Legislature.  Even though Democrats won more seats in the state Senate in November, they will not be the majority.  That`s because two conservative Democrats decided to join Republicans, effectively giving the GOP control of the Senate.

It's been a controversial move that will effectively give Republicans control of legislation and key committees. They will decide what bills get considered and which will make it to the floor for a vote. The so-called “Majority Coalition Caucus” did offer to let Democrats chair some less-powerful committees. But they weren't having any of it.

State Sen. Jeanne Kohl-Welles, D-Seattle, told her fellow senators in the chamber, “What we are seeing here I believe is form over substance, talk of bipartisanship but not true bipartisanship."

One of the defecting Democrats, Sen. Rodney Tom, D-Medina, who is set to lead the Senate, said the proposal he and the Republicans offered to the other side was fair.

“This is not about power, it is not about control, this is about listening to the citizens of Washington state. They want us to work together.  I think we have a much better option.”

The other Democrat who switched sides said concerns about Sen. Ed Murray, D-Seattle, and other liberal Democrats who would have run the Senate caused him to jump sides.

A frustrated Murray worried about the fate of progressive agenda items now that the conservatives have taken control.

The House of Representatives remains under Democratic control.

On Wednesday, Democrat Jay Inslee will be sworn in as governor.