1 year since medical experts first warned of a novel coronavirus

On Dec. 30, 2019, a minute before midnight, the global medical community received a notice warning of a then-unidentified viral pneumonia.

CANBERRA, Australia (AP) - This New Year’s Eve is being celebrated like no other, with pandemic restrictions limiting crowds and many people bidding farewell to a year they’d prefer to forget.

Australia will be among the first nations to ring in 2021 because of its proximity to the International Date Line. It is a grim end to the year for New South Wales and Victoria, the country’s two most populous states, which are battling to curb new COVID-19 outbreaks.

In past years 1 million people crowded Sydney’s harbor to watch fireworks that center on the Sydney Harbor Bridge, but most will be watching on television as authorities urge residents to stay home.

Locations on the harbor are fenced off, popular parks closed and famous night spots eerily deserted. A 9 p.m. fireworks display was scrapped but there will be a seven-minute pyrotechnics show at midnight.

People are only allowed in downtown Sydney if they have a restaurant reservation or are one of five guests of an inner-city resident. People won’t be allowed in the city center without a permit.

Some harborside restaurants were charging up to 1,690 Australian dollars ($1,294) for a seat, Sydney’s The Daily Telegraph newspaper reported Wednesday.

Sydney is Australia’s most populous city and has had its most active local transmission of the coronavirus in recent weeks.

Melbourne, Australia’s second most populous city, has canceled its fireworks this year. "For the first time in many, many years we made the big decision, difficult decision to cancel the fireworks," Mayor Sally Capp said.

"We did that because we know that it attracts up to 450,000 people into the city for one moment at midnight to enjoy a spectacular display and music. We are not doing that this year."

In notable contrast, the west coast city of Perth — which has not had community spread of the virus since April -- was gearing up to celebrate the new year almost normally with large crowds expected to watch two fireworks spectacles. 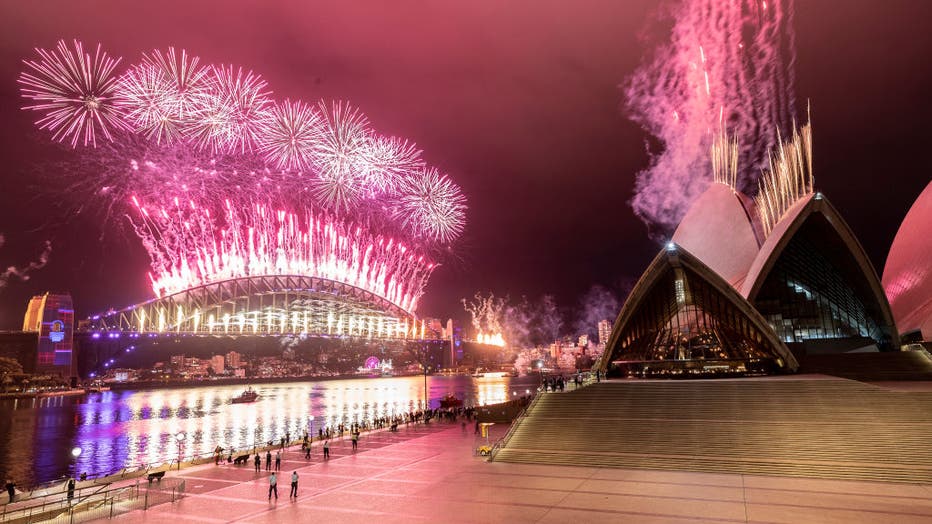 SYDNEY, AUSTRALIA - JANUARY 01: The Sydney Harbour fireworks display is seen over a near-empty Sydney Opera House forecourt during New Year's Eve celebrations on January 01, 2021 in Sydney, Australia. Amidst a new outbreak of COVID-19 in Sydney, the

New Zealand, which is two hours ahead of Sydney, and several of its South Pacific island neighbors have no COVID-19 cases, and New Year celebrations there are the same as ever.

In Chinese societies, the Lunar New Year celebration that falls in February in 2021 generally takes precedence over the solar New Year, on Jan. 1. While celebrations of the Western holiday have been growing more common in recent decades, this year will be more muted.

Beijing is holding a countdown ceremony with just a few invited guests, while other planned events have been canceled. And nighttime temperatures plunging to -15 Celsius (-5 Fahrenheit) will likely discourage people from spending the night out with friends.

Taiwan is hosting its usual New Year’s celebration, a fireworks display by its capital city’s iconic tower, Taipei 101, as well as a flag-raising ceremony in front of the Presidential Office Building on New Year's morning. The flag raising will be limited to government officials and invited guests after a traveler who recently arrived in Taiwan was found to be infected with the new variant of the coronavirus.

The island has been a success story in the pandemic, registering only seven deaths and 700 confirmed cases of COVID-19.

Hong Kong, with its British colonial history and large expatriate population, has usually seen raucous celebrations along the waterfront and in bar districts. For the second year running, however, New Year’s Eve fireworks have been canceled, this time over coronavirus rather than public security concerns.

Hong Kong social distancing regulations restrict gatherings to only two people. Restaurants have to close by 6 p.m. Live performances and dancing are not allowed. But crowds still throng shopping centers.

Much of Japan was welcoming 2021 quietly at home, alarmed after Tokyo reported a record number of daily coronavirus cases at about 1,300. It was the first time that daily cases in the capital have topped 1,000.

"The coronavirus knows no yearend or New Year’s holidays," she told reporters.

Many people skipped what’s customarily a chance to return to ancestral homes for the holidays, hoping to lessen health risks for extended families.

Emperor Naruhito is delivering a video message for the new year, instead of waving from a balcony with the imperial family as cheering crowds throng outside the palace.

Train services that usually carry people on shrine visits overnight, as well as some countdown ceremonies, were canceled.

Meiji Shrine in downtown Tokyo, which normally attracts millions of people during New Year holidays and is usually open all night on New Year’s Eve, closed at 4 p.m. this year.

In South Korea, Seoul’s city government canceled its annual New Year’s Eve bell-ringing ceremony in the Jongno neighborhood for the first time since the event was first held in 1953, months after the end of the Korean War.

The ceremony, in which citizens ring a large bell in a traditional pavilion when the clock strikes midnight, normally draws an estimated 100,000 people and is broadcast live.

Authorities in eastern coastal areas closed beaches and other spots where hundreds of thousands of people typically gather on New Year’s Day to watch the sunrise. The southeastern city of Pohang instead planned to broadcast live the sunrise at several beaches on its YouTube channel.

Millions of Indians planned to usher in the new year with subdued celebrations at home because of night curfews, a ban on beach parties and restrictions on movement in major cities and towns after the new, more contagious variant of the coronavirus reached the country.

In New Delhi, Mumbai and Chennai, hotels and bars were ordered to shut at 11 p.m. The three cities have been the worst hit by the coronavirus pandemic.

Drones were keeping watch on people’s movements in Mumbai, India’s financial and entertainment capital. Large gatherings were banned, but there were no restrictions on visiting friends, relatives and public places in groups of not more than four people, police said. Face masks and social distancing were mandatory, they said.

Many revelers flocked to Goa, a former Portuguese colony and popular backpacking destination with numerous beach resorts. Authorities decided against imposing a curfew with coronavirus infections largely controlled there.

In Sri Lanka, public gatherings have been banned due to a resurgence of COVID-19, and health and law enforcement authorities urged people to limit celebrations to close family members. Health officials have warned of legal action against hotels and restaurants that hold parties.

Officials have also closed schools and restricted public transport in response to the renewed outbreak.