Meanwhile, investigators filed an arson charge in one small fire in the county.

San Diego County District Attorney Bonnie Dumanis announced Friday the first arson charge in the spate of fires. A man was charged in connection with a small fire in the San Luis Rey riverbed area in Oceanside, she said.

At a press conference, the prosecutor identified the man charged as Alberto Serrato, who's accused of adding brush onto an existing fire, Dumanis said.

"Citizens were there and observed this," and two citizens notified police, who then made an arrest, she said.

The arson charge against Serrato carries a sentence of up to seven years in prison upon conviction, Dumanis said.

Neither Serrato nor his attorney were immediately available for comment.

Meanwhile, the prosecutor is weighing whether to press charges against a 19-year-old man and 17-year-old juvenile, both of Escondido, who were arrested Thursday in connection with a small fire that was extinguished, Dumanis said.

No countywide estimates of damage to houses, apartments and businesses were available Friday, county officials said.

The fires were extraordinary for their number so early in the year and for how close they came to residential and business areas, even torching several structures. Thousands of firefighters used air tankers, specially equipped DC-10s and military helicopter to douse the flames this week.

A more-than-3,000-acre fire in San Marcos was all but out of control with only 10% containment Friday, authorities said.

When Elisha Exon saw towers of smoke looming over her San Marcos, California, home, she knew it was time to go. The only problem: All the nearby places she'd normally take her family in an emergency were threatened by fire, too.

"You kind of feel like your only safety would be to hop town, completely," she told CNN's "New Day."

The stunning explosion of fires this week in San Diego County -- eight in all, five still burning Friday -- stirred suspicions of arson and sent thousands of people fleeing from their homes beginning Tuesday.

Meanwhile, Camp Pendleton reported a new wildfire on that military base just before noon Friday, and the blaze was burning 25 acres, prompting an evacuation in that area, the Marine Corps base said. Firefighters were already battling two other blazes on the facility.

Fire crews hoped milder winds, lower temperatures and higher humidity Friday would help them get an edge on the fires, which have burned across more than 31 of San Diego County's 4,206 square miles, according to authorities.

Mike Mohler, a spokesman for the California Department of Forestry and Fire Protection, said he was "cautiously optimistic" the day would see major gains in bringing the blazes under control.

Firefighters, aided by civilian and military aircraft, had largely contained a few of the fires, but officials said that the 1,200-acre San Marcos/Cocos fire remained "very active" and that two other fires near Marine Corps Base Camp Pendleton were largely uncontained.

The Las Pulgas fire plaguing the sprawling military base had grown to 8,000 acres and was 5% contained, the base said in a statement on Facebook. Some areas of the base had been ordered to evacuate.

Ash and smoke filled the air in many places, making breathing difficult.

So far, injuries have been few: Authorities found a charred body in Carlsbad, but it was unknown whether the person died because of the fire. A Camp Pendleton firefighter suffered heat exhaustion.

With the fires still burning, even localized damage estimates were hard to come by. But Carlsbad officials say blazes there damaged or destroyed at least 12 homes, two commercial structures and an apartment building.

In all, 176,000 notices of evacuation were sent throughout San Diego County via cell phone calls, e-mails, text messages and landline calls to homes and businesses, county Supervisor Dianne Jacob said.

On Thursday night, 232 people stayed in four shelters, along with 79 dogs, cats and birds, Jacob said.

"Our fire season has begun," Jacob said. She pointed out how January predictions of this year possibly being the worst fire season have "come true."

In the area including San Marcos and the Cocos Fire, 56,000 notices were dispatched, county spokeswoman Sarah Gordon said. But only 11,000 people in that fire area remained evacuated Friday, Cal Fire Capt. Mike Mohler said. The remainder were allowed to return home, Gordon said.

In Escondido, more than 15,000 residents were told to evacuate. The evacuation zone included a 12-story hospital, Palomar Medical Center West, but authorities ultimately told workers there to shelter in place with patients.

Still, thousands of homes across the county are still in jeopardy.

"I've been doing this for 20 years," San Diego County Supervisor Bill Horn told CNN. "This is the worst I've seen."

Images from the fires were jarring.

The night sky glowed orange from towering flames that consumed homes. Whirling columns of flame -- dubbed "firenadoes" or "fire whirls" -- spun across the landscape, in one case nearly devouring a hilltop home.

Firenadoes are spinning columns of flame fed by fuel drawn into the air by naturally occurring vortices created by fire, CNN meteorologist Indra Petersons said. They can spit out winds as powerful as an EF-2 tornado, she said.

In video shot by Jeb Durgan and Byron Bowman, a helicopter wheeled over homes, dumping fire retardant just yards from a burning canyon choked with flames. Smoke obscured the road the two were driving on.

"If you imagine standing next to a barbecue or a campfire and multiply that by a hundred, that's what it felt like for a few seconds," Bowman said.

Two are investigated for arson

While the causes of the wildfires remain unclear, arson has been a primary suspicion among residents.

Escondido police Thursday night arrested a 19-year-old man and a 17-year-old juvenile, both of Escondido, in connection with arson-related charges stemming from brush fires along Escondido Boulevard and Kit Carson Park, authorities said.

Community members observed the fire and put it out, Dumanis said.

Police don't have reason yet to think the teens were involved in the other fires, but "obviously we will be exploring that possibility," Griffin said.

Evolution of a disaster

The wave of wildfires started Tuesday with the Bernardo Fire in San Diego County. The next day, new blazes popped up -- each one separate from the others, each posing its own dangers.

Cal Fire Director Ken Pimlott said that the amount of fire activity statewide so far this year has been "unprecedented."

Here's where some of the major California fires stood as of Friday morning, according to Cal Fire:

The Cocos Fire in San Marcos

• The fire is still very active, with evacuations in effect.

The Tomahawk Fire at Marine Corps Base Camp Pendleton

• A Camp Pendleton firefighter was being treated Thursday for heat exhaustion.

• 5% of the fire has been contained

• Camp Las Pulgas and Camp Margarita were ordered to evacuate.

The Bernardo Fire in San Diego

• Authorities believe the blaze will be fully contained Friday. Evacuations were lifted.

The Poinsettia Fire in Carlsbad 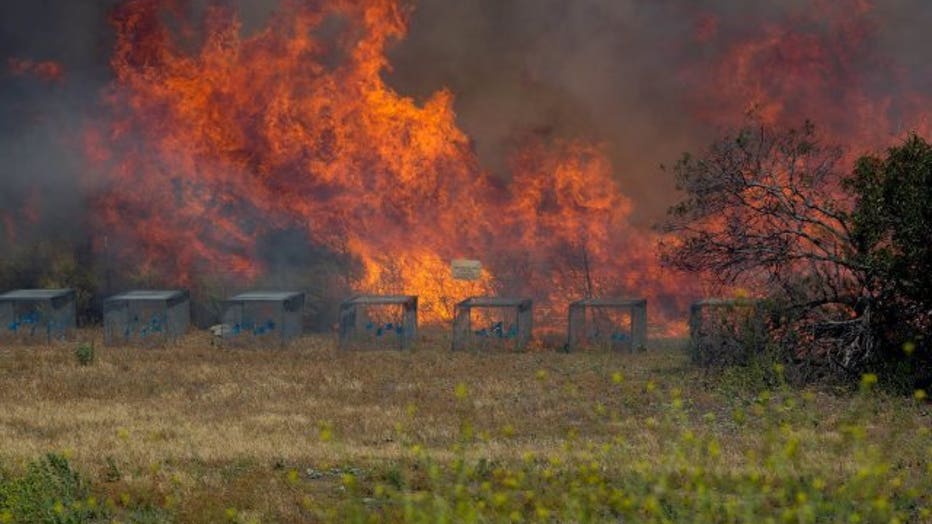