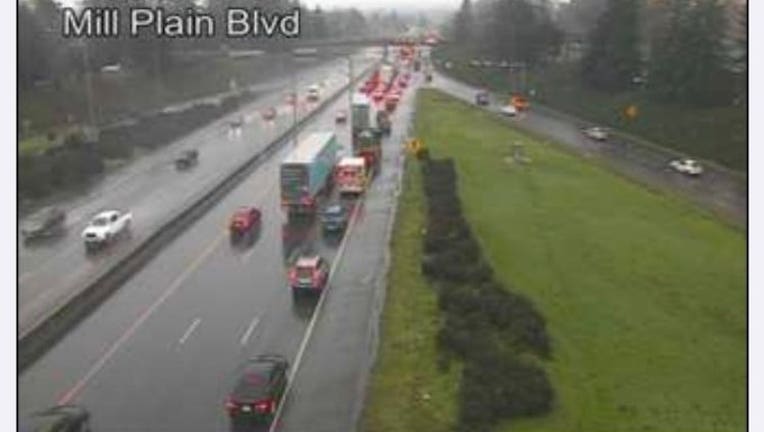 PORTLAND, Ore. - Authorities say an armed suspect was shot and killed on Interstate 5 on Monday by police in Portland, Oregon, following multiple carjackings.

A portion of the freeway in North Portland was closed as police investigate a "complex" crime scene that spans multiple parts of the city. However, there is no further danger to the public, police say.

Around 9:10 a.m., police responded to a home invasion in the northern area of the city. Police say that the suspect stole a car from the house and committed "multiple" other carjacking over the span of 30 to 40 minutes.

Portland Police Lt. Nathan Sheppard said that as officers followed the stolen vehicle, the suspect drove northbound on I-5 — heading into oncoming traffic.

At one point, the suspect got out of the stolen car and attempted yet another carjacking at gunpoint on the freeway. Police say the suspect shot an occupant in the car. The victim was treated for a non-life-threatening injury.

Nearly 40 police and medical units responded to the incident, which shut down the freeway in both directions. At the time police used deadly force — shooting and killing the suspect.

"This is a very complex investigation with the crime scene spanning all over north and northeast Portland," Sheppard said during a media briefing.

This is the fourth fatal officer-involved shooting by Portland police this year.

"Anything we respond to is dangerous and ... we just can’t predict how it’s going to go. Anything can end up in a deadly force situation," Sheppard said.

After the the officer-involved shooting, police announced that between the "critical incidents" and staffing shortage — officers are only responding to Priority 1 and 2 calls, likely until Monday evening.

Sheppard said that anytime there’s a homicide, "resources are going to be spread thin,"

Sheppard said the department is calling officers in early for their shifts, however many of them were held late the night before because of another shooting.

"This is not a daily occurrence," Sheppard said. "Although it seems like we’re kind of getting there with the crime we’re seeing in Portland.