FUGITIVE CAPTURED March 14, 2014 -- A SWAT standoff in Ridgefield ended with the deadly shooting of an armed and dangerous fugitive. Deputies said Derral Kenneth Mosby was holed up at his father's home on Northeast 29th Avenue. By 4 p.m., SWAT team members had fired flash bang grenades into the home, according to the Clark County Sheriff's Office. Shots were heard at around 4:30 p.m. Deputies said Mosby ran out of the home and confronted the SWAT team with a gun in his hand. He was then shot. It was not clear how many shots were fired. Investigators said he was taken to a local hospital in an ambulance. By 6 p.m., deputies confirmed that Mosby was dead. There were no reports of any other injuries at the scene. Detectives did not reveal what led them to the Ridgefield home on Friday. FUGITIVE UPDATE March 10, 2014 -- Police say Derral 'Kenny' Mosby broke into a house near the rest area in Ridgefield on Thursday and stole a vehicle. He then contacted people via payphone in the Salem/Albany area, asking for help. Law enforcement from Portland to Albany flooded the area and found the stolen vehicle that was reported stolen from the burglary in Albany, but they were unable to locate Mosby. He is believed to be hiding in the Albany area on foot. FUGITIVE WANTED IN LEWIS COUNTY Feb. 28, 2014 -- Detectives in Lewis County are warning people to use extreme caution when dealing with fugitive Kenny Mosby. At 6-foot-8, he should be easy to spot. But watch out because, deputies say, he's often armed with a knife and pistol. Mosby has multiple felony warrants -- for trafficking stolen property and possession of meth. He's known to hang out around the Centralia area, but has ties from Rochester to Ridgefield. 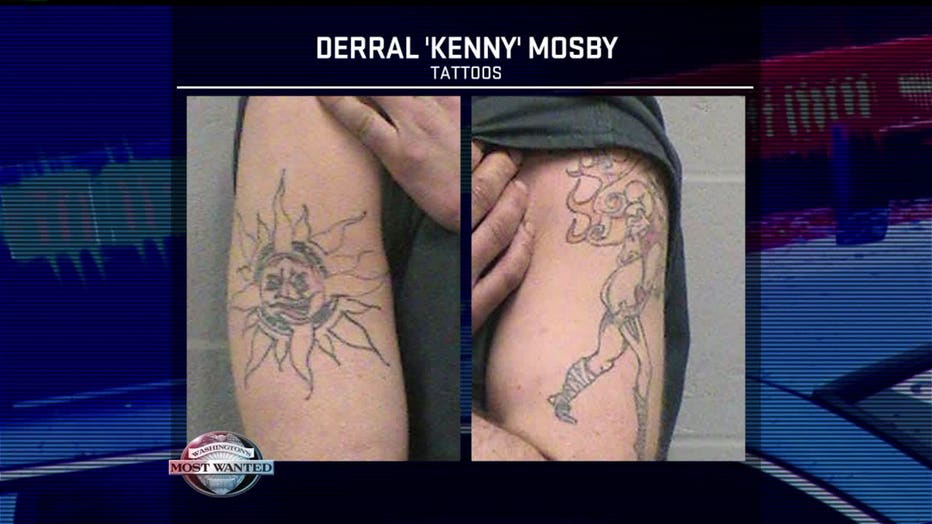 Mosby has multiple tattoos, including an image of the sun on his right arm, and a lady on his left. If you know where Mosby is hiding, call an anonymous tip into: CRIME STOPPERS: 1-800-222-TIPS You must call the Crime Stoppers hotline with your tip to be eligible to receive a cash reward for information leading to a fugitive’s arrest. CLICK HERE for information on how to TEXT A TIP to Crime Stoppers