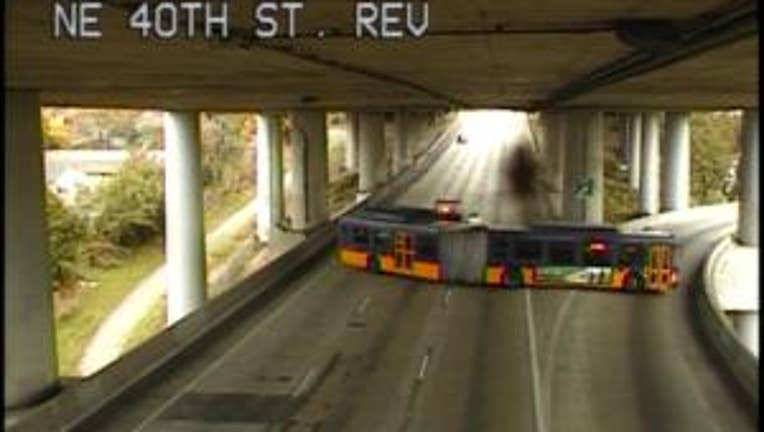 The wrong-way Route 41 Metro Transit bus being driven back to its station after the incident Wednesday.

SEATTLE -- A Metro Transit bus driver drove past a “Do Not Enter” sign and the wrong way on an Interstate 5 express lane with a bus full of passengers Wednesday afternoon until he noticed cars coming directly at them – an incident that Metro Transit called a “very, very serious safety infraction.”

The driver had entered the closed ramp at 75th Street near the Northgate Transit Center, in north Seattle, but the express lanes had just switched from southbound to northbound for the afternoon rush hour, so the bus driver didn’t see any oncoming traffic until the bus reached the Northeast 45th Street overpass, Metro Transit spokesman Jeff Switzer said.

A passenger on the bus told the Seattle Times that when the cars approaching head-on became evident to all aboard, the passengers panicked and the bus driver pulled over to the shoulder. A Washington state incident response truck then helped divert traffic until the State Patrol showed up and shut down the express lanes.

"Wow! A weird day, even for Seattle standards," tweeted Washington State Patrol public information officer Chris Webb. "The wrong-way bus possibly entered north of 45th St. going SB as the Express Lanes were NB. It is believed that the driver did not see the 'closed' sign. A black car may have followed the bus onto the express lanes."

Switzer, the Metro Transit spokesman, said, “This was a very, very serious safety infraction and we’re glad no one was injured. We’re investigating, and the driver likely faces consequences.”