TAMPA, Fla. - Charges of domestic battery against former Buccaneer Antonio Brown are being dropped, according to the Hillsborough County State Attorney's Office.

In joint filings from Brown and his ex-fiancee, Chelsie Marie Kyriss, who is the mother of Browns' five children, the pair requested law enforcement not pursue charges against the former Bucs wide receiver. Rather, the parties asked they be allowed to resolve their differences in private, citing Bible verses from the chapters of Leviticus, Matthew and James, as well as court cases involving police perjury.

The state attorney's office did not resist. In a new filing, the office said the charges were dismissed and "prosecution is terminated."

"The defendant need not appear for any further proceedings in this matter," the document said. 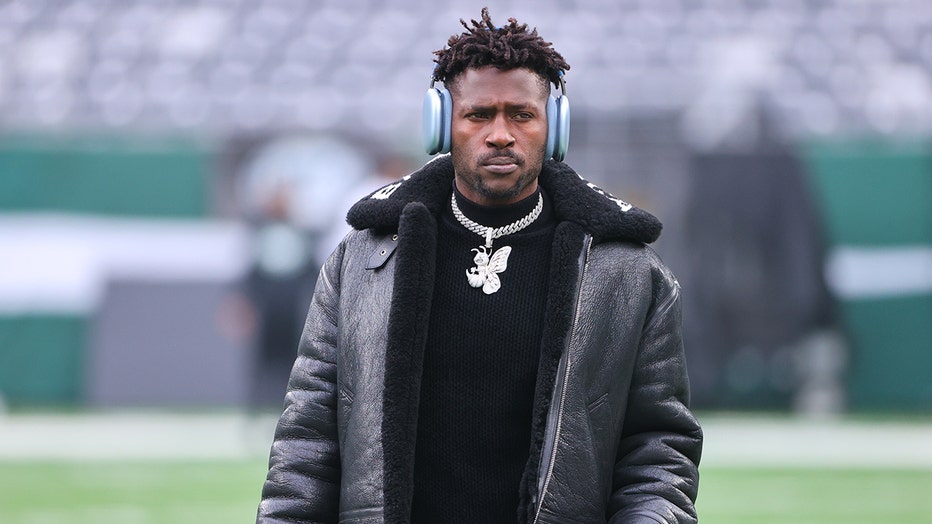 Tampa Bay Buccaneers wide receiver Antonio Brown (81) on the field in a Balenciaga jacket and a diamond Bee necklace prior to the National Football League game between the New York Jets and the Tampa Bay Buccaneers on January 2, 2022 at MetLife Stadi

It's been almost a month since the incident that led to Brown being charged, but he was never arrested. Tampa police enlisted the state attorney's office's assistance to determine whether there was probable cause to arrest Brown, 34, after a verbal altercation on Nov. 28. A police report said Brown threw a shoe at a woman, attempted to evict her from the home and locked her out.

On December 2, TPD said it was monitoring his home trying to serve an arrest warrant the day before.

Police said they went to his South Tampa home the afternoon of Dec. 1, but Brown refused to come out and officers took no further action.

A legal expert told FOX 13 that it's not uncommon for police to leave after trying to serve a warrant if they don't want the situation to escalate, can't physically see the subject in the home, or are negotiating a surrender behind the scenes.

During a Dec. 16 interview with investigators, Kyriss recanted her previous allegations "regarding Mr. Brown's intent to strike her or cause her bodily harm," a statement from the state attorney's office said.

In the request to drop charges against Brown, Kyriss said she is a foreign national and "hereby drop and dismiss all charge against Antonio Tavaris Brown with prejudice."

A separate filing by Brown and Kyriss accuses the two officers with Hillsborough County Sheriff's Office child protective services of "unconstitutional" contact with their children.

The filing says CPS officers spoke to several of the pair's children, without their knowledge or consent, at the children's schools and daycare on Dec. 7.

The former couple says in their filing that CPS violated his children's civil liberties, among other claims.

FOX 13 is requesting comment from the Hillsborough County Sheriff's Office regarding the claims.

The Tampa Police Department said in a statement that it "stands firmly in its decision to thoroughly investigate this case," outlining the steps investigators took to assist Kyriss as a victim of alleged abuse. Those steps included applying for a temporary risk protection order "due to comments she made regarding Mr. Brown's mental state and his possession of guns," police said, noting that the risk protection order was later denied by a judge. Officers also offered Kyriss the services of the Spring of Tampa Bay, a shelter for domestic violence victims, but said she refused.

Tampa police said the agency "continues to encourage anyone who is a victim of domestic violence to seek help by calling law enforcement or the National Domestic Violence Hotline at 1-800-799-7233 for immediate assistance." Local victims can also find help from the Spring of Tampa Bay by calling or texting their 24-hour crisis hotline at 813-247-SAFE (7233).

Brown’s contract with the Tampa Bay Buccaneers was terminated a few days after he tossed his equipment into the stands and left in the middle of a Jan. 2 game. Brown had said he was pressured to play injured, but then-Tampa Bay coach Bruce Arians said Brown was upset about not getting the ball enough.

Brown has a long history of troubled behavior on and off the field, including being accused by two women of sexual assault, one of whom said Brown raped her. In the 2021 season, he served a three-game suspension for misrepresenting his COVID-19 vaccination status.

He was also suspended for eight games in 2020 for multiple violations of the NFL’s personal conduct policy, after pleading no contest to burglary and criminal mischief charges related to a fight with a moving truck driver outside his South Florida home that year.

Brown started his career with the Steelers, and was named to the All-Pro team four times and selected for seven Pro Bowls during his nine seasons in Pittsburgh. He was later traded to the Raiders, but never played in a regular-season game because he was released following several off-field incidents. Then New England signed him, but released him a few weeks later after a second woman in 10 days accused him of sexual misconduct.