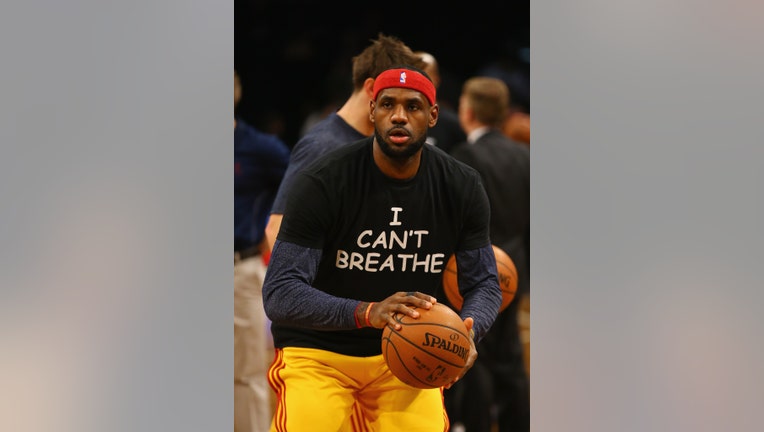 Lebron James wears an "I can't Breathe" shirt Monday at an NBA game.

Protesters chanted, "black lives matter" and "off the sidewalks, into the streets."

One woman held a sign that said, "Stop killing us."

The demonstration blocked traffic at cross streets along Connecticut Avenue, a major thoroughfare that connects the White House to upper northwest Washington.

In New York City, police were bracing for more demonstrations Monday. Activists were threatening to disrupt the visit of the Duke and Duchess of Cambridge, who are scheduled to attend a Nets game in Brooklyn.

A large crowd of demonstrators had already gathered outside the Barclays Center on Monday evening before the game started. Inside the arena, several players showed support for protests, according to CNN partner Bleacher Report.

As they warmed up for the game, Cleveland Cavaliers LeBron James and Kyrie Irving were among the players wearing T-shirts that said "I can't breathe" -- Garner's last words, which have become a rallying cry for protesters.

"There's nothing more American than having the right to voice your concern," he said. "We want them to be constructive and not destructive. What we saw in St. Louis, we don't want in the borough of Brooklyn."

"They've respected people's right under the First Amendment to express their views. They've kept the peace. They've kept order," he told reporters Monday. "We had only a handful arrests the last two days, which is extraordinarily impressive given all of the activity that's happening."

De Blasio says he understands parents who are worried about what might happen if their kids encounter police. The New York mayor says he's had to warn his own son about that possibility.

"When he was just becoming a teenager, you know, the conversation was a difficult one and a complicated one, because you're trying to say to a young person who obviously looks up to police, you know, be careful and be smart and respect the police, but also recognize that there are these realities to be grappled with -- and that's a tough conversation to have with a young man," he said.

De Blasio is white. His son is biracial.

"This is a national reality. It's not just a New York reality," de Blasio said. "And that, unfortunately, is further evidence of how much more we all have to learn from each other. ... The goal is to get to a day when no parent feels they have to have that conversation."

Protesters across the country demanded justice over the weekend for Garner, Brown and other black men who have died at the hands of police.

Demonstrators flooded a highway in Oakland, California, late Sunday night, prompting a heated standoff in the freeway between protesters and the California Highway Patrol.

Some threw explosives, bottles and rocks at officers, authorities said. Highway Patrol Sgt. Diana McDermott said it wasn't clear what type of explosives were thrown, but she said some in the crowd had Molotov cocktails and M-80 firecrackers.

Gurpreet Heer, a student at the nearby University of California, Berkeley, said he saw people throwing glass and rocks at police.

"People were vandalizing police cars and jumping on the cars," Heer said.

One protester was struck in the head with a hammer when he tried to keep fellow protesters from damaging and looting a Radio Shack, she said. The man was hospitalized, but his injuries are not believed to be life-threatening.

Two Berkeley officers also suffered minor injuries. Coats said five people were arrested, but she did not know the charges.

The acts of violence were apparent anomalies in a sea of protests nationwide decrying a grand jury's decision not to indict the officer who killed Garner, an unarmed black man.

Some demonstrators are getting more creative in delivering their message.

In New York, protesters at Penn Station sang "justice carols," such as these lyrics to the tune of "Little Drummer Boy":

"Help, he told them,

I cannot breathe, you see,

Death to this human being."

Hundreds of protesters also gathered at Grand Central Terminal and Macy's in Herald Square -- sites of multiple "die-ins" over the past few days -- before barging through the nearby Toys R Us to lie on the floor en masse.

One young couple made the event a family affair, lying on the floor with their toddler between them.

"What's happening in these cities in these last several days is incredibly important to show we have a unified voice," said Judi Flournoy, who was participating in a New York protest.

While protesters chanted "Black lives matter," many of the demonstrators were not black.

While some protesters in New York chanted, "How do spell racism? NYPD," members of the New York Police Department marched alongside them, showing restraint.

Not everyone is on their side

But in Imperial, Missouri, demonstrators staged a different kind of protest Sunday.

That gesture became a symbolic part of anti-police demonstrations in the Michael Brown case.

"Why would you do something like that? It's utterly ridiculous," said Larry Magee. "I think the Rams ought to pack their bags, and I'll give them a plane ticket back to L.A."

Daughter: 'This is not a black-and-white issue'

Garner's daughter Erica said she was deeply moved by the diversity of protesters who have demonstrated across the country.

"This is not a black-and-white issue. This is a national crisis," Erica Garner said.

Unlike with the Michael Brown case, a video showing the moments leading up to Garner's death has been widely circulated.

Erica Garner says that video has struck a nerve with many.