Attorneys for the family of Andrew Brown Jr., a Black man killed in Elizabeth City, North Carolina by deputies, said at a news conference that an independent autopsy showed he was shot five times, including once in the back of the head.

ELIZABETH CITY, N.C. - Loved ones gathered Monday in North Carolina for the funeral of Andrew Brown Jr., a Black man shot and killed by deputies, as attorneys for the family continued to call for transparency and justice in the case.

The invite-only funeral service was held at a church in Elizabeth City following a public viewing that drew scores of people over the weekend.

The Rev. Al Sharpton (https://apnews.com/article/shootings-death-of-daunte-wright-north-carolina-al-sharpton-elizabeth-city-a1a836d98f8fe1e33ca5d0f9cbb862bf) was to deliver the eulogy, planning to celebrate his legacy and reflect on his life, and other speakers included Brown's relatives as well as civil rights attorney Ben Crump, who is representing Brown’s family.

A long line of mourners filed into the church, many wearing white T-shirts with Brown’s image and the words, "Say his name." In the lobby, a wreath of red and white flowers with a ribbon bearing the message, "Rest in Peace Drew," referring to Brown’s nickname, stood next to a tapestry with images of him. As the service started, an ensemble sang songs of praise including, "You're the Lifter," while some mourners stood and clapped. 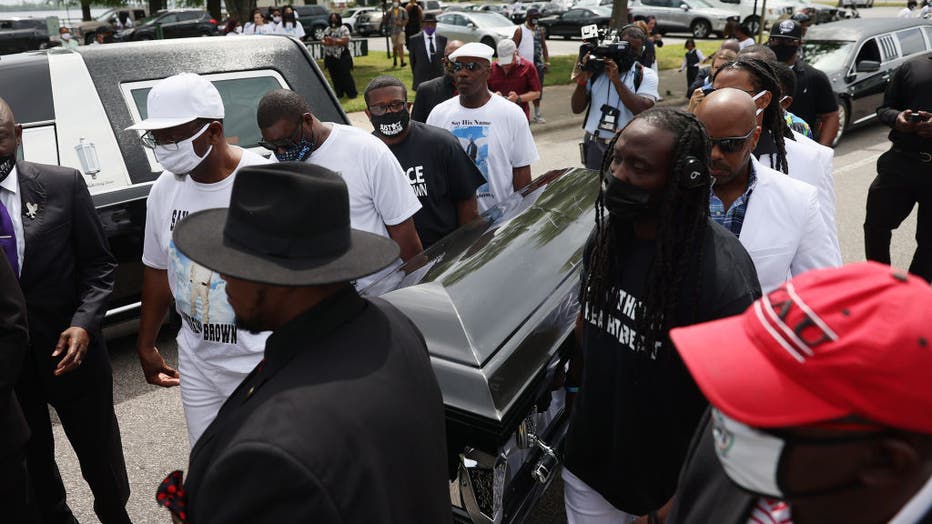 Pallbearers carry the casket of Andrew Brown Jr. to a horse drawn carriage before his funeral service at the Fountain of Life church on May 3, 2021 in Elizabeth City, North Carolina. (Photo by Joe Raedle/Getty Images)

Family members have said that Brown was a proud father of seven, who was known for entertaining relatives with his stories and jokes.

Brown’s family asked Sharpton to deliver the eulogy because they felt the civil rights leader would properly honor his legacy. Sharpton recently delivered the eulogy for Daunte Wright, who was shot and killed by a police officer in Minnesota.

Sharpton previously told The Associated Press that he wanted to both celebrate Brown’s life and help call attention to larger problems with policing that need to be addressed.

"I would want to get across that this is a human being. And for us, it’s part of a continual abuse of police power," he said.

Brown, 42, was shot to death April 21 by one or more deputies trying to serve drug-related search and arrest warrants, authorities said. An eyewitness said Brown tried to drive away but was shot dead in his car.

An independent autopsy commissioned by his family said that he was shot five times, including once in the back of the head.

His death sparked days of protests in the city in rural northeastern North Carolina. On Sunday, protesters marched through the city yelling his name, demanding justice and transparency in the case.

A judge ruled last week that body camera footage showing Brown’s death may be released in 30 days, saying he believed the videos contained information that could harm the ongoing investigation or threaten the safety of people seen in the footage.

North Carolina law allows law enforcement agencies to show body camera video privately to a victim's family, but it generally requires a court to approve any public release. Brown's relatives were shown a 20-second clip of footage from one deputy's body camera.

One of the Brown family lawyers, Chantel Cherry-Lassiter, who viewed the video, said last week that officers opened fire on Brown while he had his hands on the steering wheel of a car. She said the video showed Brown trying to drive away but posing no threat to officers.

Among the mourners who arrived Monday at the church was 40-year-old Davy Armstrong, who told the Associated Press that he went to high school with Brown and lived near him while the two were growing up. He said Brown seemed to be doing well when he ran into him recently before the shooting.

"He was very humble, very generous. He said he was doing good," said Armstrong, who works in construction. "We hear about this on TV all the time. But when it’s someone so well known and so respected, it’s pretty painful."

The Rev. Dwight Riddick, a pastor at Gethsemane Baptist Church in Newport News, Virginia, said he was there to support the family and the cause against Black men being killed by police.

Riddick added that Brown’s killing has caused flashbacks to his own childhood, when he witnessed excessive force by police in Chesapeake, Virginia. He said several officers arrested his childhood neighbor and close friend, who was Black. His friend later died in prison.