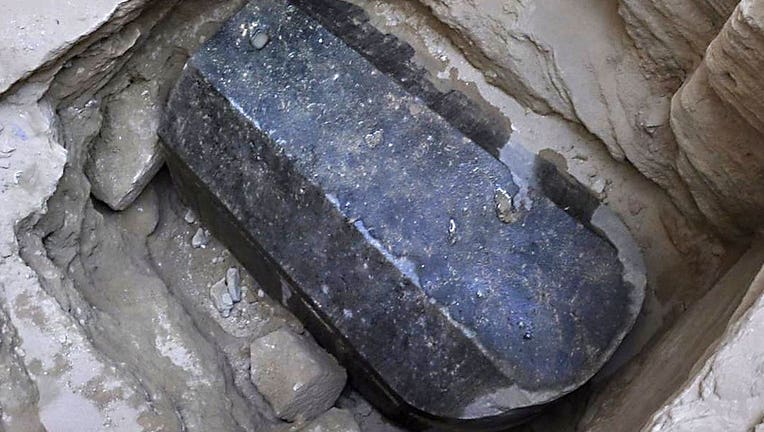 This picture released by the Egyptian Ministry of Antiquities shows an ancient tomb dating back to the Ptolemaic period found in the Sidi Gaber district of Alexandria. (Getty Images)

Egyptian archaeologists have unsealed and opened a mysterious granite sarcophagus discovered on a construction site in Alexandria -- only to find the remains of three mummies in a pool of leaked sewage water.

Photos released Thursday evening by Egypt's Ministry of Antiquities show a team of archaeologists climbing down the 16-foot-deep (5 meter) pit and wedging the black sarcophagus open with a wooden plank. The experts had to wear masks over their mouths and noses to block the reportedly foul smell.

An archaeologist at the site, Shabaan Abdul, said that the remains most likely belonged to three military officers, according to a post on the ministry's Facebook page.

A ministry official, Aiman Ashmawy Ali, told CNN that the sarcophagus had been found in a previously unexcavated section of one of Alexandria's largest ancient cemeteries.

"One of the mummies had a trace of an arrow in the head," he said in a phone interview. "It proves he died in a conflict. Maybe that explains three mummies in one big sarcophagus."

The contents of the sarcophagus have been the subject of intense speculation since the relic was uncovered earlier this month. But not only were no treasures found within, the mummies inside had disintegrated beyond recognition.

Joseph Manning, a professor of ancient history at Yale University, said that while such finds are not especially unusual, this particular case merited further investigation. 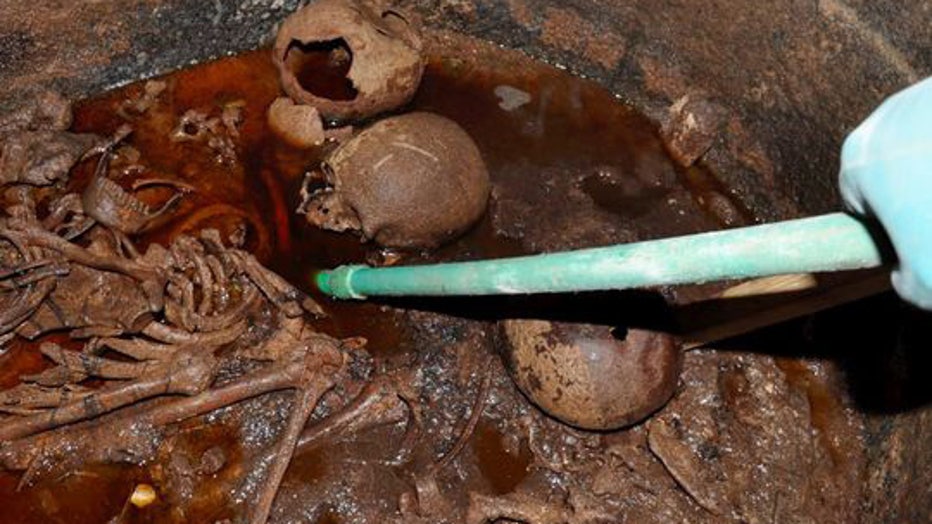 "As far as I can see, there's no inscription on the sarcophagus, which is strange," he said. "You're not going to see someone important buried like this."

University of Auckland Egyptology Professor Anthony Spalinger stressed that granite was both expensive and difficult to cut.

"They would have taken it downstream and carved it in the area," he said in a phone interview. "It implies that there was wealth involved."

Somewhat unusually, experts said, the three mummies were buried without any belongings. The only other item discovered at the site was an alabaster bust, its features destroyed beyond recognition.

Manning, who said the archaeological find "looked like a non-elite burial," has a theory on its origins: that although the sarcophagus appeared to date back to the Ptolemaic Kingdom (305 B.C. to 30 B.C.), it may have been used more than once.

"It is conceivable to me that (the sarcophagus has been) reused in a later period," he said. "I'd want to know a lot more."

Ali acknowledged that it is difficult to date the sarcophagus without an inscription. But more answers can be expected after forensic examinations, which will take place at the Alexandria National Museum, according to Egyptian state media reports.

Further excavation at the site may prove difficult, however, as the finding was made on a privately-owned construction site.

"(The) Ministry of Antiquities and the Egyptian government have procedures (for) checking any building before it is renewed or repaired," Ali said. "This sarcophagus was found according to regular procedures."

Such measures are considered necessary in a country where the remnants of ancient Egypt are regularly smuggled and sold. In June, Egyptian state media reported the return of over 100 artifacts smuggled into Naples, Italy. In a separate incident, nine other relics were sent back to the Ministry of Antiquities from France.