Barrett remarks on her nomination in the Rose Garden.

Trump announced his pick on Saturday to fill the U.S. Supreme Court seat vacated by the death of Justice Ruth Bader Ginsburg. Trump hailed Barrett as “a woman of remarkable intellect and character,” saying he had studied her record closely before making the pick.

“I looked and I studied, and you are very eminently qualified,” Trump said as Barrett stood next to him in the White House Rose Garden. 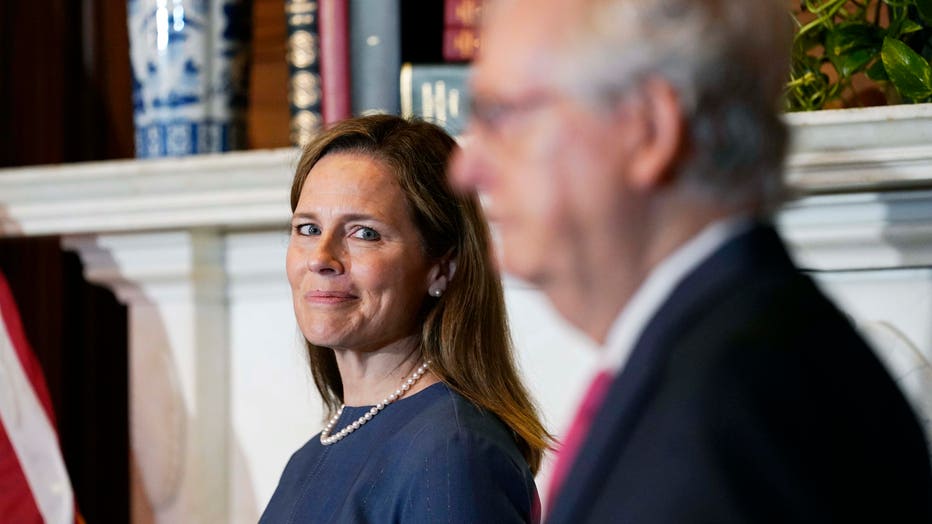 Barrett, who had been considered a front-runner in the days following Ginsburg’s death, is a federal appellate judge and someone who has established herself as a reliable conservative on legal issues ranging from abortion to gun control.

Barrett is a devout Catholic and has been hailed by religious conservatives and others on the right as an ideological heir to conservative Antonin Scalia, the late Supreme Court justice for whom she once clerked.

If confirmed, her ascension would be sure to move the high court rightward on health care and other pivotal issues.

At just 48, Barrett would be the youngest justice and her tenure could last for decades.

Liberals have said Barrett’s legal views are too heavily influenced by her religious beliefs and fear her appointment to the nation's highest court could lead to a scaling back of hard-fought abortion rights. She also would replace Ginsburg, a justice who is best known for fighting for women's rights and equality.

Ginsburg’s death set off a battle over whether her seat should be filled so close to the Nov. 3 election. Senate Republicans are readying for confirmation hearings in two weeks, with a vote in the full chamber now expected before Election Day.

With Republicans holding a 53-47 Senate majority, and just two GOP senators opposing a quick vote, Barrett appears to have enough support for confirmation. Earlier on Tuesday, Barrett met privately on Capitol Hill with Senate Majority Leader Mitch McConnell and others.

In 2017, Trump nominated Barrett to fill the vacant seat on the 7th Circuit Court of Appeals, a jurisdiction that covers Indiana, Illinois, and Wisconsin.

Barrett was previously considered for the Supreme Court, among those on a list to replace retiring Justice Anthony Kennedy in 2018. Trump ultimately chose to nominate Justice Brett Kavanaugh.