13 years ago, Zane Rhoades was gifted a bicycle by a local firefighter during his town's Christmas parade. Now, with the help of his father, He's paying it forward by handing out bikes to local kids.

More than half of U.S. adults say it’s harder to afford the holiday gifts they want to give this year.

Sixty-nine percent of them say they have seen higher prices for holiday gifts in recent months, up from 58% last year, according to a new poll from The Associated Press-NORC Center for Public Affairs Research.

And 57% say it has been harder to afford the things they want to give, a dramatic increase from 40% one year ago. The vast majority of those finding it harder to afford gifts say they've cut back on giving as a result.

Last year, 89-year-old Darlene Huffman used some of her government stimulus money to buy KitchenAid food choppers — which cost around $40 — for her six children. But this year, with the price of gas, groceries and other basics eating into her limited income, Huffman is downsizing. She plans to buy them each a $10 trash can that attaches to the backseat of a car.

"I have to watch my p’s and q’s. But God has supplied all my needs and I’m not complaining," said Huffman, who will spend much of the season volunteering at food and clothing banks in her hometown of Greenville, Ohio.

RELATED: US inflation slowed in November to 7.1% over past 12 months 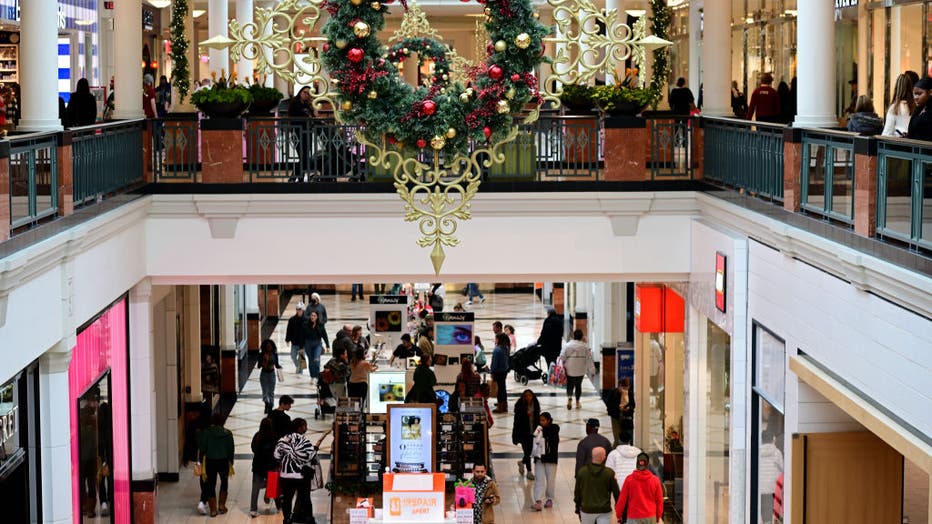 U.S. inflation appears to be cooling; consumer prices fell for the fifth straight month in November, the government said Tuesday. But prices were still 7.1% higher than a year earlier, an increase felt most acutely by low-income households.

Roslyn Coble doesn’t plan to buy holiday gifts this year. Coble, 63, lives on monthly disability checks and has struggled with higher prices for food and other necessities this year.

"I’m less interested in going out and trying to buy things," said Coble, of Oakboro, North Carolina. "I’m not as much into it this year."

Coble is looking forward to spending the holidays with family. And she’s expecting a small raise in her disability payments in January.

"Next Christmas I’ll be able to do more," she said.

RELATED: Don't have your Christmas plane ticket yet? Here's what an expert says

The poll shows nearly all Americans — 95% — have seen higher-than-usual prices for groceries in recent months, up from 85% last year, according to the poll. The U.S. government estimates food prices will be up 9.5% to 10.5% this year; historically, they’ve risen only 2% annually.

RELATED: Average price of gas plunges to cheapest in over a year

As a result, many buyers may be looking for discounts this year, and retailers are likely to respond. The average discount rate across all categories online was 31% on Thanksgiving, up from 27% last year, according to Salesforce.

Tierra Tucker, a 34-year-old day care worker in Chicago, said she's been shopping since Black Friday for her twin 13-year-old daughters and has found deals on many of the gifts they're getting, including iPads, purses, clothes and bracelet-making kits.

Tucker hasn't cut back on gifts for her daughters this year, but she won't be spending as much on others. Tucker recently moved and said she has had to focus on getting things for her new house. So her seven nieces and nephews will get gift cards instead of toys.

Overall U.S. holiday sales are expected to grow at a slower pace than last year. The National Retail Federation, the largest retail trade group, expects holiday sales to grow 6% to 8% this year, down from 13.5% in 2021.

Daniel Reyes, a postal worker from Midland, Texas, said he made more money than usual this year thanks to overtime. But he’s still thinking twice about what be buys in the face of steep price increases and losses to his 401(k) plan.

"I do give it a beat. If I need it, I need it, so I will get it," he said. "But some of the luxuries, like beer or wine, maybe I’m not going to buy because everything is more expensive."

Reyes, 51, spent $1,200 last Christmas buying handguns for his two adult children. But this year he has already warned them not to expect high-end gifts.

"I’d rather spend $200 and buy steaks and all the fixings," Reyes said. "We’ll make it more about family than about material items."

RELATED: Flight attendant who was joined by dad on every Christmas flight has holiday off for ‘first time’

The poll of 1,124 adults was conducted Dec. 1-5 using a sample drawn from NORC’s probability-based AmeriSpeak Panel, which is designed to be representative of the U.S. population. The margin of sampling error for all respondents is plus or minus 3.8 percentage points.