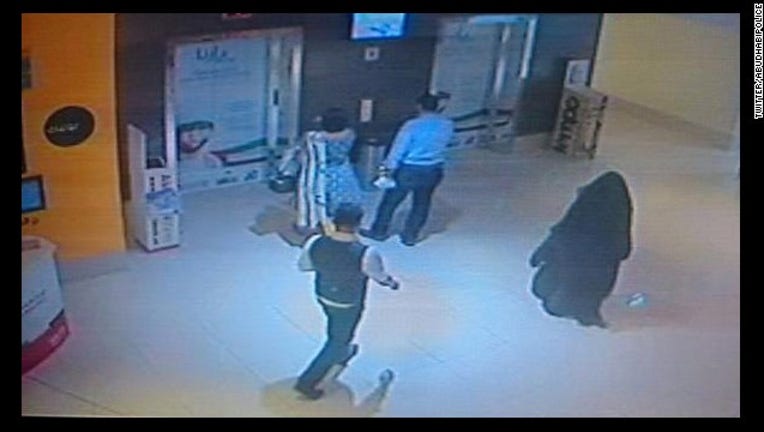 The 37-year-old woman, whom police did not name, was taken to the hospital after the attack Monday on Reem Island but died of her injuries.

She worked as a schoolteacher and had 11-year-old twins who are being cared for by authorities until their father, the victim's ex-husband, arrives from abroad, police said.

The woman was stabbed with a sharp tool, later recovered by police, after a fight broke out in the women's restroom, according to Col. Dr. Rashid Mohammad Borshid, head of the Criminal Investigation Department of Abu Dhabi Police.

The cause of the fight remains unknown and the suspect fled the scene immediately after committing the crime, he said.

Police have appealed for help tracking down the killer.

"Investigations are still under way to identify the suspect's identity and gender," a police statement Tuesday said. "Witnesses reported that the culprit was fully covered wearing an abaya, black gloves and face cover (niqab)."

The abaya is a black, full length gown traditionally worn by local Emirati women. The suspect was also wearing a hijab, or headscarf.

The U.S. Embassy in Abu Dhabi said it was "working with all the appropriate authorities to seek further information" about the killing of a U.S. citizen.

"We offer our condolences to those affected by this terrible tragedy," a spokesman said in an earlier statement. "The safety and welfare of U.S. citizens abroad is one of the Department of State's highest priorities. We stand ready to provide all possible consular assistance."

The attack happened at the Boutik mall on Reem Island, a newly developed area of Abu Dhabi where many Western expatriates live.

CCTV footage released by police shows the suspect, fully covered, walking calmly in through the parking lot entrance, speaking to security guards, picking up a paper and disappearing around the corner out of sight.

Violent crime in the UAE is rare and eyewitnesses have expressed shock at the incident.

"The Abu Dhabi Police will spare no effort in order to unveil this heinous crime and bring the culprit to justice," said Borshid.