Whittaker’s final assault to the top happened on May 1, 1963, when he and his Sherpa Gombu woke up at 27,000 feet in the brutal cold with savage winds.

“It was 35 below zero, and it was a ground blizzard coming up,” said Whittaker.  “You couldn’t see your footprints because the plume, all that new snow was going in front of you. And so I looked up at the ridge where the plume was and started kicking steps up.” 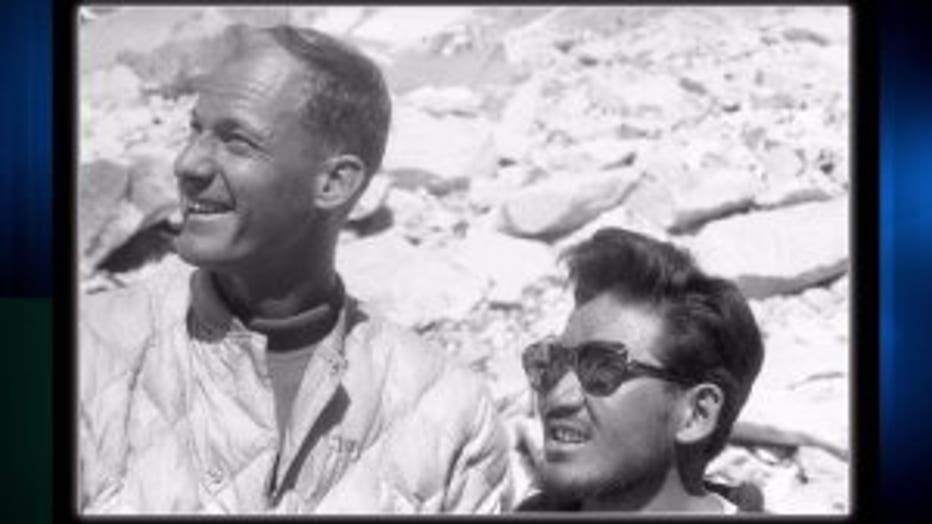 Whittaker and Gombu made the final, harrowing assault to Earth’s highest point without water.

“You get dumb at high altitudes,” he said about the decision to put water they had melted on the outside of their packs.  “We go to take a drink of water, and all be damned, it’s ice.”

Whittaker said they lasted 12 hours without water as they made the ascent to the top, which he remembers was excruciating.  “You are taking five breaths to a step,” he said.  “Just dry as the devil.”

Whittaker recalls that as they approached the top he turned to Gombu and gestured for him to go first.  Gombu, in turn, wanted Whittaker to go first.  Instead, they did it together.  “Side by side, we walked up to the highest point of Earth,” Whittaker said.

When asked what was going through his mind at the top, Whittaker said it wasn’t anything to do with God or the meaning of life.

“How to get down,” he recalls of his first thought.  “I mean, we were in the death zone.  There’s not enough oxygen to support life, you know.  And so if you got any brains at all, you know you’ve gotta get out of the death zone.”

Overnight, Whittaker became one of the most famous Americans, right up there with John Glenn, who a year earlier had orbited the planet.  “I didn’t really know that until we had a ticker tape parade and went back to the White House.”

Whittaker says things are much different on Everest now than 50 years ago.

“Now it’s very crowded,” he said.  One advantage, though is that you can fly in very close to base camp and the existence of actual establishments at the bottom.   “You can get a beer right up to base camp,” he said.

Whittaker believes they are trying to put too many people on the top, which he attributes to the money.  “Here’s the client sitting there,” Whittaker said.  “He’s paid you $60,000 bucks to climb.  What are you going to do?”

Whittaker notes that guides have died because of being pressured to take people up the mountain in dangerous conditions.

The 1963 expedition was outfitted by Eddie Bauer.  The company has created a new documentary film titled “High & Hallowed: Everest 1963,” set to premiere at Mountainfilm in Telluride in late May.

Whittaker’s great achievement is detailed in a newly re-issued autobiography, “A Life on the Edge.”