Johnny Depp trial: Hear the verdicts being read in court

Hear the moment the jury returned with verdicts in the Johnny Depp vs. Amber Heard civil trial

RICHMOND, Va. (AP) - Amber Heard's lawyers have asked a judge to throw out the $10.35 million verdict against her in the defamation case filed by ex-husband Johnny Depp, arguing that the verdict was not supported by the evidence and that one of the jurors may not have been properly vetted by the court.

In post-trial motions filed Friday, Heard's attorneys call the jury's June 1 award of $10 million in compensatory damages and $5 million in punitive damages to Depp "excessive" and "indefensible." They ask the judge to set aside the verdict and dismiss Depp's lawsuit or order a new trial. Immediately after the verdict, the judge reduced the compensatory damages to $350,000 under a state cap.

Depp sued Heard for libel in Fairfax County Circuit Court over a December 2018 op-ed she wrote in The Washington Post describing herself as "a public figure representing domestic abuse." Depp's lawyers alleged he was defamed by the article even though it never mentioned him by name. 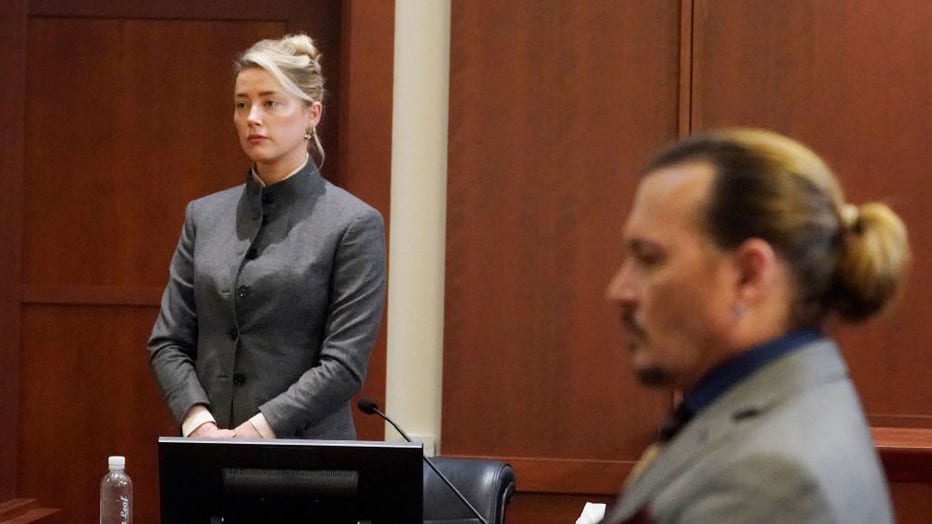 US actors Amber Heard (L) and Johnny Depp watch as the jury leaves the courtroom at the end of the day at the Fairfax County Circuit Courthouse in Fairfax, Virginia, May 16, 2022. (Photo by Steve Helber/Pool/AFP via Getty Images)

The six-week televised trial turned into a spectacle that offered a window into their dysfunctional marriage. Much of the testimony focused on Heard's claims that she had been physically and sexually abused by Depp. Heard described more than a dozen alleged assaults, including a fight in Australia — where Depp was shooting a "Pirates of the Caribbean" sequel — in which Depp lost the tip of his middle finger and Heard said she was sexually assaulted with a liquor bottle.

Depp said he never hit Heard and that she was the abuser.

Depp had to prove that he never assaulted Heard, that her op-ed piece defamed him and that she wrote the article with actual malice.

In their post-trial motions, Heard's legal team argued that to find that Heard had actual malice, Depp would have had to show that at the time Heard's article was published, she did not believe she had been abused.

"Instead, the evidence overwhelmingly supported Ms. Heard believed she was the victim of abuse at the hands of Mr. Depp," Heard's lawyers say in their motion.

"This discrepancy raises the question whether Juror 15 actually received a summons for jury duty and was properly vetted by the Court to serve on the jury," Heard's lawyers said in their motion.

Depp's attorneys did not immediately respond to a request for comment.

The jury also awarded Heard $2 million in her counterclaim against Depp, finding that that Heard was defamed by one of Depp’s lawyers, who accused her of creating a detailed hoax that included roughing up the couple’s apartment to look worse for police.

In some ways, the trial was a replay of a lawsuit Depp filed in the United Kingdom against a British tabloid after he was described as a "wife beater." The judge in that case ruled in the newspaper’s favor in 2020 after finding that Heard was telling the truth in her descriptions of abuse.