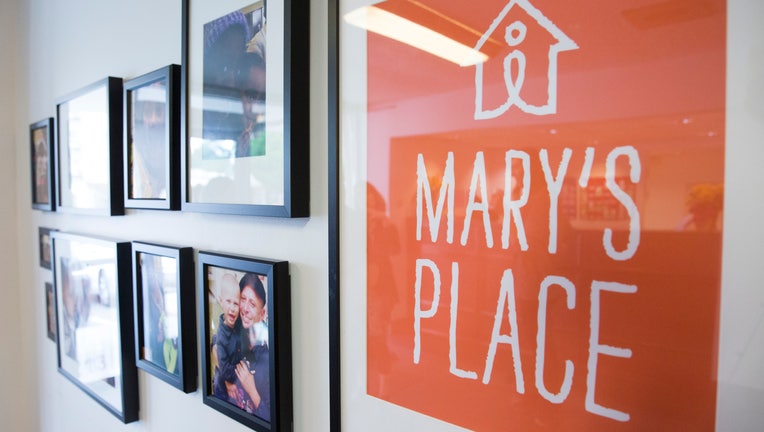 A sign for the non profit Mary's Place is pictured next to photos in a building owned by Amazon that is being used as a temporary homeless shelter for women and their families in Seattle, Washington on May 4, 2016. According to the non profit, Marys

SEATTLE - After becoming homeless, Connie Wade realized she’d be missing something critical to care for her daughter.

She and 12-year-old Emilyanne couldn’t camp in a car or on the streets because they need to plug in a machine that helps the girl breathe easier. Emilyanne has Down syndrome and her breathing is interrupted every six minutes without a CPAP device.

A typical open-space homeless shelter promised them a spot by an electrical outlet, but Wade felt they’d be too vulnerable.

Then they got an offer from Mary’s Place, a family homeless shelter that recently opened a facility inside a gleaming new building on Amazon’s Seattle campus. Believed to be the first homeless shelter built inside a corporate building in the U.S., the nonprofit’s Popsicle Place shelter program helps homeless children with life-threatening health conditions.

Amazon’s state-of-the-art, eight-story building allowed the unique program to triple its capacity. The $100 million commitment to the shelter is the tech giant’s single largest philanthropic contribution to its hometown, which it transformed with tens of thousands of high-paid tech jobs that some blame for exacerbating income inequality and affordable housing problems.

Critics also say Amazon’s explosive growth over the past decade helped fuel a growing homelessness crisis in Seattle. The online retailer faced backlash two years ago after getting city leaders to rescind a tax on large companies that would have funded homeless services. That year, CEO Jeff Bezos — the world’s richest man — announced that his long-awaited, private charitable fund would tackle homelessness.

The City Council is on the cusp of approving a new payroll tax that again would collect money from big businesses to address homelessness, affordable housing and other priorities, including the coronavirus pandemic.

John Schoettler, Amazon’s real estate chief who spearheaded the partnership with Mary’s Place, said the company isn’t totally opposed to taxes and called its new shelter “an initial step.” Amazon asked the nonprofit to help design the building because it has the space permanently, he said.

“Every inch of it was designed for the families they were going to serve,” Schoettler said.

The nonprofit takes up half of a glass-encased building, with workers in the company’s cloud computing unit on the other end. It opened in March just as the pandemic shuttered public life in Seattle.

Outside is now an eerily quiet, perfectly manicured tech campus that normally bustles with workers and food trucks.

Two floors are reserved for families dealing with debilitating health issues, many of them with compromised immune systems from chronic illnesses or chemotherapy. Though bathrooms are shared, families have private sinks for medical needs such as feeding tubes.

A different program at the shelter also takes in homeless mothers with newborns, including prematurely born babies, for whom the bathtubs — a rarity in homeless shelters — are especially appreciated.

Experts with the National Alliance to End Homelessness and the National Health Care for the Homeless Council said the Popsicle Place program is a model they haven’t seen before.

The initiative is critical because medical bills have consistently been the top cause of bankruptcy in the U.S. for the past 40 years, and homeless children are much more likely to have chronic health conditions, said Bobby Watts, chief executive of the council.

Most families who come to Popsicle Place had some semblance of work and home stability before a child’s health issue contributed to their homelessness, either because parents could no longer work while they cared for their child or because the cost of care left them unable to afford housing.

Watts said it’s unknown how many families struggle with that type of homelessness because the U.S. Department of Housing and Urban Development only tracks the health conditions of homeless adults. He has never met Bezos but was an adviser for the Amazon boss’s private “Day 1 Families Fund,” which offers donations to groups sheltering young families.

Cindy Manginelli, who visits families in shelters across Tennessee as coordinator for the TennCare Shelter Enrollment Project, said the instability of homelessness is at odds with the needs of sick children.

Being homeless means moving often, which disrupts the continuity of care. Parents dealing with a child’s diagnosis also must worry about providing basics like food. And kids lack the comforts of home, often something as simple as a familiar bed.

“If you are told to lay down and rest — which is a big part of getting better — how can you?” Manginelli said.

Families usually come to Popsicle Place through a referral from Seattle Children’s Hospital, often when a social worker discovers a child has nowhere to go to recover.

Wade is grateful for the Amazon facility, saying it feels almost like a luxurious hotel instead of a homeless shelter. Her tentative smile turns to tears as she describes how much her daughter loves the many kid-friendly, fort-like spaces built into the walls of the shelter.

“She won’t remember being homeless,” Wade said, her voice cracking. “But I know she will remember this place.”