EVERETT, Wash. -- At first glance, it starts off like any other package theft. A home surveillance camera capturing video of a man removing a parcel off an Everett front porch. But it’s what happened just before he took the package that has homeowners Matt and Amanda Buxton so baffled.

The stolen package was delivered just before 4 p.m. Tuesday by a UPS driver. 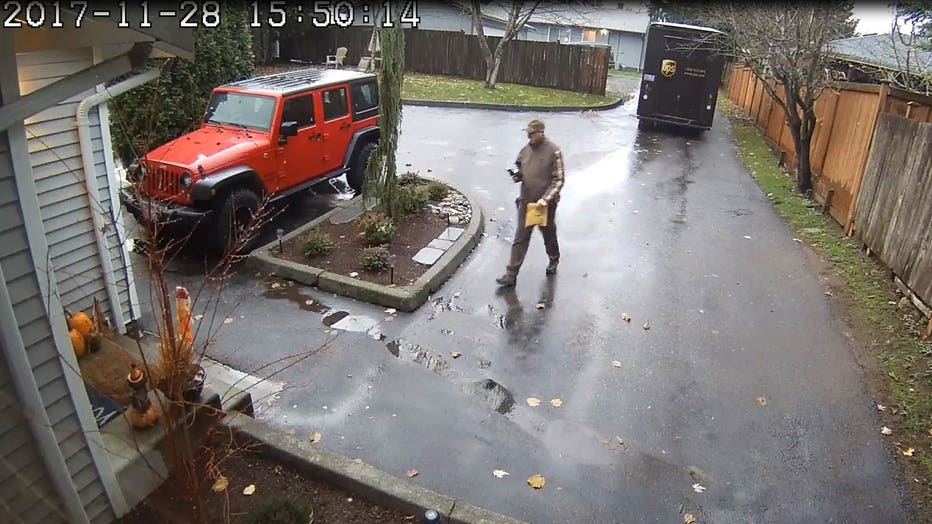 Except, the man who appears to steal the package first made his own Amazon Prime delivery. 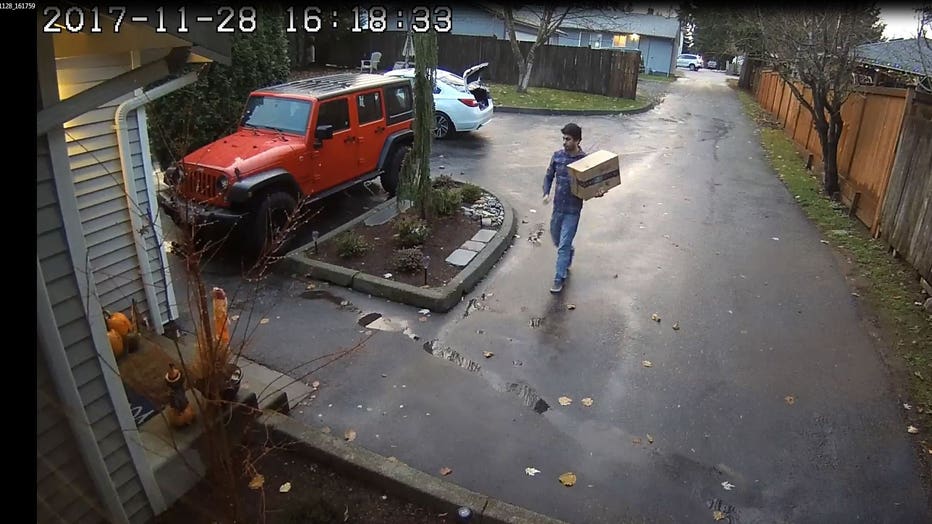 All of it caught on the homeowners Samsung SmartCam with large "Smile You're On Camera" signs posted near the front door.

"It's surprising when things happen with people that you're supposed to trust with your packages," said Amanda.

The thief appears to have worked for Amazon, seen on camera snapping a picture notice of delivery before driving off.

"They take a picture then it sends it automatically, showing that it was delivered," Amanda said holding a delivery receipt, with the picture snapped by the suspect, on her phone.

The whole thing is infuriating, for Matt and Amanda who use amazon prime constantly.

"It was almost more frustrating to see that happen than some random person walk off the street and grab a package," said Matt.

The package removed was worth less than $3.

"I would pay anything to see the look on his face and opened up and found out that it was a baby teether," Matt laughed.

But for the couple, monetary value wasn't the point.

They still contacted Everett Police who acted quickly. The officer took the surveillance video right to the Everett distribution center to identify the driver, telling the homeowners he was worried the driver might strike again. The driver was arrested and released. Police are recommending charges of misdemeanor theft.

Amazon is investigating the matter but says they have a zero-tolerance policy for drivers. And that drivers in plain clothes and unmarked vehicles are contracted for anytime delivery through the Amazon Flex Program. It sounds similar to Lyft or Uber -- expect instead of delivering people, they're dropping off a package.

In an email to Amanda the company apologized for this experience, saying in part:

"At Amazon, we pride ourselves in being the world’s most customer-centric company. Regrettably, our delivery partner couldn’t meet our high standards in this instance. We expect our delivery partners to conduct themselves in a professional manner, and we handle this type of situation seriously. I’m personally collaborating with the team to investigate this matter further and take the appropriate actions."

Amazon reviewed the surveillance video and compensated the victims for their hassle.

In a statement issued to Q13 News, Amazon said:

“This does not reflect the high standards we have for delivery partners. This individual is no longer delivering Amazon packages and we are engaged with the customer to ensure this situation is fully resolved.”

According to their website, drivers who work for Amazon's Flex Program can make between $18-25. But must first pass a comprehensive, multi-state background check as well as a check of their driving record.

Police were able to identify that driver Wednesday and arrested him for misdemeanor theft.