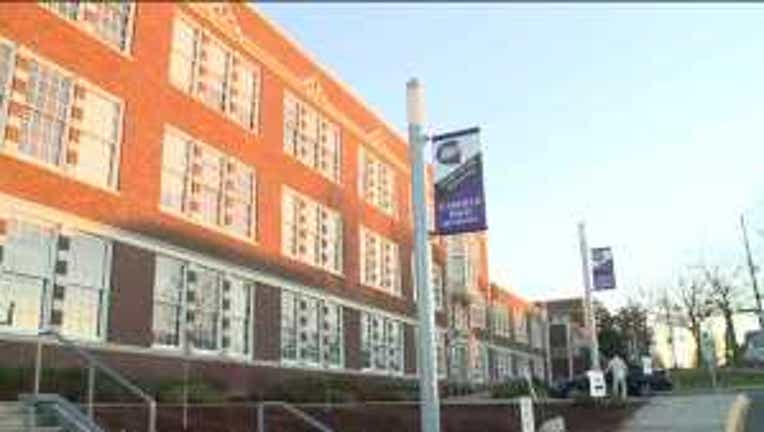 SEATTLE -- An alleged gang leader busted inside Garfield High School has been accused of trying to lure kids into a life of crime.

The school's resource officer is being applauded for catching the 25-year-old man before damage could be done.

Officer Bennie Radford is a Seattle police officer assigned to protect Garfield High since 2008. The school says Radford stopped alleged gang member Eric Sanford from doing what he is accused of doing best:  recruiting boys for gangs and girls for prostitution.

The sister of defendant Eric Sanford is Doneesha Brown. She said the accusations against Sanford is a character assassination of her brother. He's made mistakes in the past, Sanford said, but strongly denies that Sanford was at the school recruiting students for a gang or prostitution. She says Sanford is NOT in any gang.

"We are aware of gang activities and we know our students are in gangs," said Garfield assistant principal Lenora Lee.

Lee said having a uniformed officer at school almost every day ay is not about intimidating students. "He is here to support the kids; he is not here to get the kids," said Lee.

Students are so used to seeing Radford in the hallways they don't just see him as a cop but consider him a friend. "He is nice, really easy to talk to," said sophomore Jalin Bird.

It's that kind of open relationship that led to a tip that Sanford was casing the school for recruits. Sanford is accused of planning to recruit male students to join his gang and female students for prostitution. Radford did a background check and discovered Sanford had warrants.

So, when Sanford walked into the school last week, Radford was ready.

"He went to arrest him and the gentleman started to run and so there was somewhat of an altercation," said Lee.

The officer injured his knee while running down and arresting the suspect but no students were hurt.

Garfield High hired Radford after student Quincy Coleman was shot and killed in a gang-related fight. But now with so much reported violence on school campuses, many people are pushing for resource officers in all schools.

"It's just a good resource to have, especially after what happened in Connecticut and stuff, so I feel like everyone is more protected and feel more comfortable," said sophomore Darnell Hogan.

"I think having a resource officer for middle and high school students is valid. I would like to see that for our kids," said Lee.

Garfield High parent Sandra Fukuhara says she is thankful for officer Radford's actions but she is not convinced that every school can afford a school resource officer when education dollars are scarce.

Garfield is the only Seattle public school to have a full-time resource officer. Sanford is charged with assaulting Radford.