"We’re excited to take this step forward," Inslee said. "We think there’s reason to be optimistic."

All of Washington headed for Phase 3

Under Phase 3, all indoor spaces — including indoor dining at restaurants, indoor fitness centers, and retail — can increase capacity from 25 to 50 percent.

Outdoor events with permanent seating can have up to 25 percent capacity. This includes professional teams, high school sports, rodeos and other similar events.

On March 18, the state increased the number of people who can be in the stands for high school and youth sports.

The Seattle Mariners will be able to welcome fans in person on opening day and indoor businesses statewide can have up to 50 percent occupancy starting March 22.

The Mariners said they have approval to host up to 9,000 fans a game, and Mariners chairman John Stanton said in a statement that the team is "thrilled to be able to welcome fans back to T-Mobile Park for the first time since 2019."

Opening day for the Mariners is April 1, while the Sounders start their season April 16. OL Reign of the National Women’s Soccer League start May 15.

The new guidelines also allow up to 50 percent occupancy for indoor spaces and up to 400 people for indoor and outdoor events. Physical distancing and masks are required.

Currently, all counties are paused in the second phase of the plan but will move to the third phase next week. Inslee also announced changes from the previous regional metrics that had to be met, moving back to a county-by-county assessment the state had previously used. He also changed the number of metrics that need to be met from four down to two. 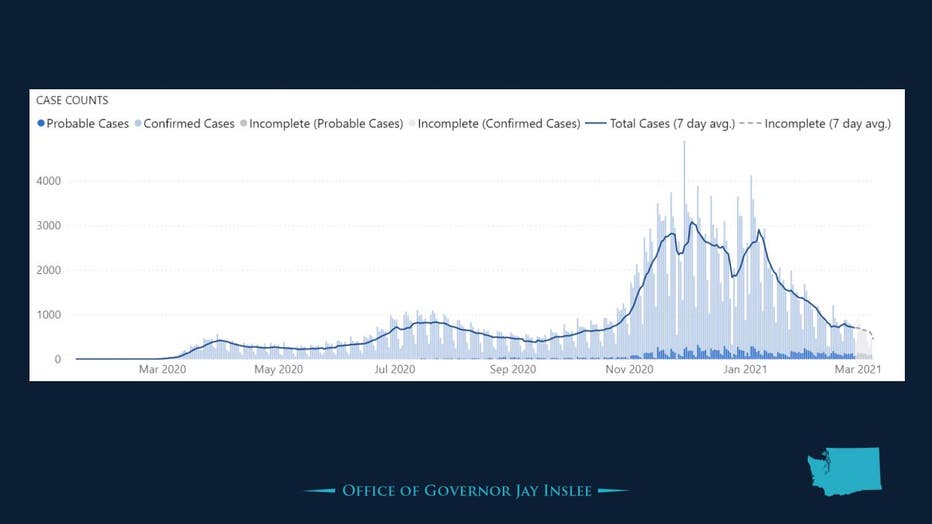 Counties will be evaluated every three weeks after moving into Phase 3, with the first evaluation on April 12.

If any county fails to meet one or more of the following metrics, it will move down one phase. If statewide ICU capacity reaches more than 90 percent, all counties will revert to Phase 1.

The health department noted that it can make changes to this plan and move counties forward or backward at its discretion.

Metrics for counties with populations above 50,000:

Metrics for counties with populations below 50,000:

Inmates at state and federal prisons will not count toward a county's case rate for reopening.

Workers in prisons, jails, detention centers and other correctional facilities will not count toward a county’s case rate.

Republicans and businesses have been pushing the governor for a Phase 3 plan for weeks, but Inslee said he wanted first to talk with businesses, health officials and others, as well as look at the status of the virus and progress in the state’s vaccination efforts before crafting a plan.

There have been 327,000 confirmed COVID-19 cases in Washington state, and 5,100 deaths. The state has seen a steady decline in new daily cases, hospitalizations and deaths since earlier this year, though health officials on Thursday expressed concern that the number of new cases have started to plateau. Officials also continue to be alarmed by an increased detection of the highly contagious variants of the virus in the state.

Inslee also moved up the timeline for the next group on the vaccination schedule. Originally the group that includes law enforcement and workers in agriculture and grocery stores was supposed to become eligible March 22, now they will be on March 17.

The state has exceeded its goal of 45,000 vaccinations a day, with a current 7-day average of 46,119, More than 2.1 million doses of vaccine have been administered to date, and more than 10% of the state’s population has been fully vaccinated.