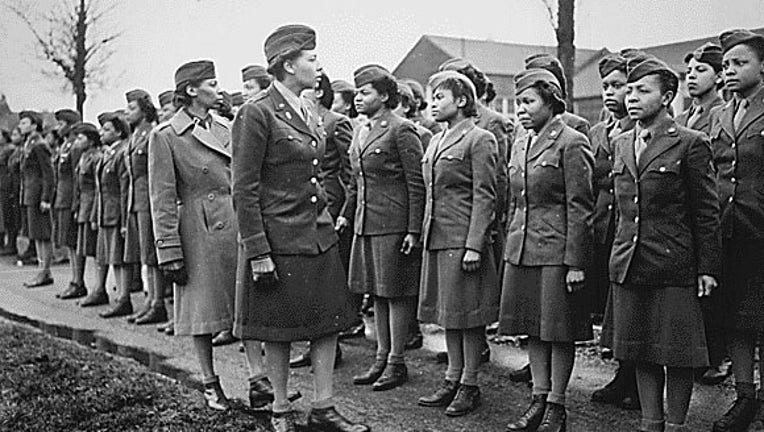 WASHINGTON - The all-Black women’s Army Corps unit to serve in Europe during World War II will be awarded the Congressional Gold Medal more than 75 years after being credited with solving a growing mail crisis and serving as role models to future generations of Black women in the military.

Congress’ highest civilian honor is being awarded to the 6888th Central Postal Directory Battalion, also known as the "Six Triple Eight," after a bill was signed into law on March 14 by President Joe Biden. The law recognizes "their pioneering military service, devotion to duty, and contributions to increase the morale of personnel stationed in the European theater of operations during World War II."

The bipartisan legislation was co-sponsored by Sens. Jerry Moran, R-Kansas, and Jacky Rosen, D-Nev., following a long-running campaign to recognize the unit tasked with sorting and routing mail for millions of American service members and civilians — the only lifeline connecting them to loved ones at home.

The Six Triple Eight cleared out a backlog of about 17 million pieces of mail in three months, which was half the time projected. But like so many Black units during World War II, their achievements never got the same attention given their White counterparts.

Only six of the more than 850 members were still alive as of Feb. 28, according to the Associated Press.

The bill to recognize the Six Triple Eight passed unanimously in the Senate in April 2021 and also received a 422-0 vote last month by the House.

"The women of the Six Triple Eight have earned a special place in history for their service to our nation, and as of today, their sacrifice is enshrined into law with the highest distinction Congress can bestow," Moran said in a statement last week.

What is the Ghost Army?

The Ghost Army refers to a secret unit that used inflatable equipment, sound effects, radio trickery, and other deceptions to draw enemy forces away from American units, saving an estimated 30,000 lives.

By 1945, roughly 7 million U.S. service members, Red Cross workers, and government personnel were stationed in Europe, and mail "was the lifeline connecting them to those they had left back home," the Department of Defense said in a recent statement.

That year alone, more than 3.3 billion pieces of mail went through military postal services to reach the frontlines, according to Kimberly Guise, the National WWII Museum senior curator.

But the abundance of mail and a shortage of qualified postal workers to sort it led to "a massive backlog of letters and packages, some of which were mailed up to three years prior," the DoD said. 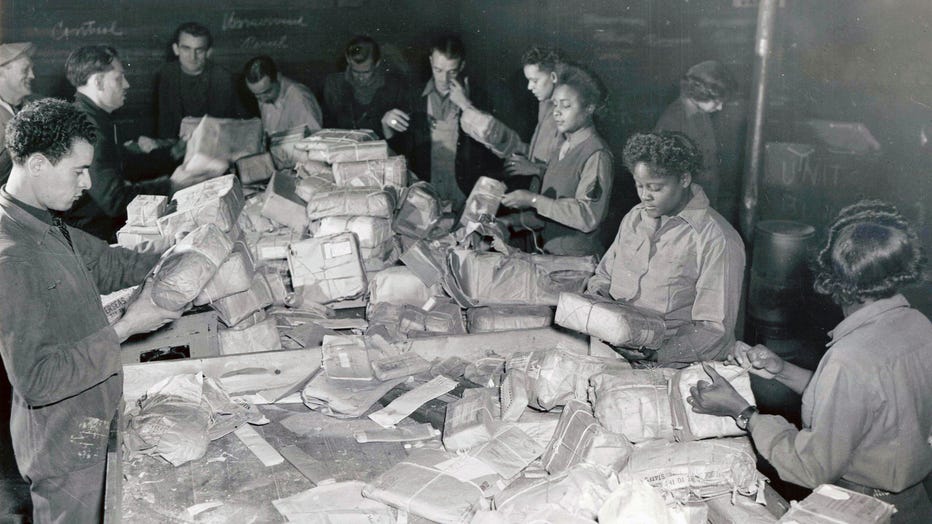 This led to the creation of the Six Triple Eight, which was made up of five companies totaling about 850 Black women tasked with sorting through the backlog in unheated airplane hangars. They were commanded by Army Maj. Charity Adams, who rose to the rank of lieutenant colonel and became the highest-ranking Black woman during the war.

While the unit didn’t go to the frontlines, its soldiers still had to go through weeks of basic training, which included obstacle courses and gas mask drills, Guise said. The women also studied enemy aircraft, ships and weapons, learned to board and evacuate ships, and even went on long marches with rucksacks, according to the DoD.

They were deployed to England in February 1945, dodging German U-boats on their way and scrambling to escape a German rocket once they reached a Glasgow port.

The battalion then traveled to the cold, rat-infested airplane hangars in Birmingham, England, and was given the daunting mission of processing the millions of undelivered mail for troops and other WWII workers. The mountains of mail had piled up and troops were often upset about lost letters and delayed care packages. Thus their motto, "No Mail, Low Morale."

"It was a daunting task. Not only were they sorting mail, but the essential foundation of their mission was to boost morale across the entirety of deployed U.S. forces," the DoD said. "Most frontline soldiers hadn't received any mail in months, so the unit took the mission very seriously."

One of the job’s many complications included when women came across recipients with the same names.

"For example, reports showed there were 7,500 men named Robert Smith. The unit also had to investigate and decipher pieces of mail that only listed nicknames for the recipients or had insufficient addresses. The women often resorted to using serial and/or service numbers to figure out the correct recipient," the DoD explained. 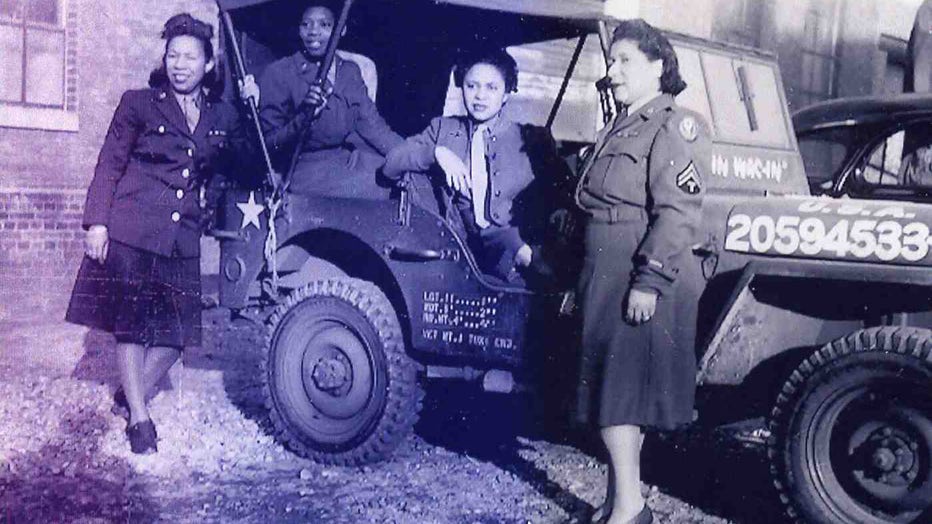 Women's Army Corps Cpl. Alyce Dixon poses with members of her unit during World War II. She and about 850 other black women served with the 6888th Postal Directory Battalion in England and France. The battalion was responsible for clearing a backlog

Attempted mail deliveries were also frequently bounced back since service members were often moving locations. As a result, the unit had to then re-sort the mail, find a new location for its recipient and try again. Each piece of mail was worked for 30 days, according to the Army Combat Studies Institute.

"If the recipient couldn't be located in that time, the mail was marked as undeliverable and returned to the sender. When unit members discovered that an intended service-member recipient had died, they had the unenviable task of handling that return mail," the DoD said.

The women processed 65,000 pieces of mail per eight-hour shift and cleared what was thought to be a six-month backlog in only half that time — a total of about 17 million pieces of mail, the DoD said, citing Army historians.

After that job was finished, the 6888th was sent to Rouen, France, in June 1945 to continue their mission and began work a few weeks after victory was declared in Europe. The unit cleared a similarly sized backlog just as quickly as it did in England with the help of French civilians and German prisoners of war, according to the DoD.

RELATED: US Army discovers MIA soldier from only Black infantry division in WWII is related to Spike Lee

Despite the achievements of the Six Triple Eight, it still endured questions and criticism from those who didn’t support Black women in the military.

Housing, mess halls and recreation facilities were segregated by race and sex, forcing them to set up all their own operations. Adams, the unit commander, was also criticized by a general who threatened to give her command to a White officer. She reportedly responded, "Over my dead body, sir." 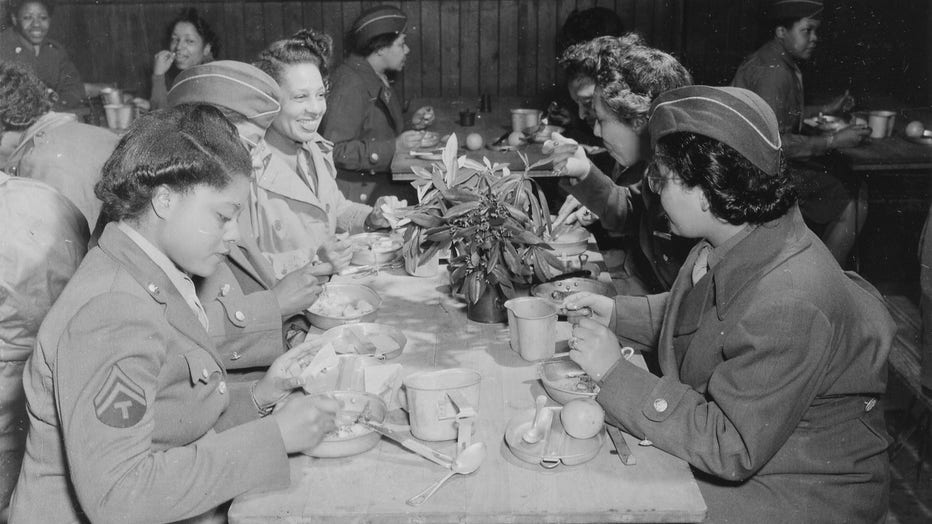 Members of the 6888th Central Postal Directory Battalion eat together in the unit's mess hall in Birmingham, England, Feb. 15, 1945. Photo By: Army/National Archives

Several Black male service members also assumed the women were sent to Europe to provide them with companionship — a notion the women of the 6888th quickly set straight, according to the National Museum of the U.S. Army (NMUSA). The Red Cross denied the 6888th entry to their club and instead opened a segregated club for the women, but the battalion never set foot in it to show their united disapproval of such a slight, the DoD said.

Furthermore, some of the unit's recreational basketball players were invited to play on an Army all-star team, but the invitation was rescinded when the Army learned the women were Black, according to the NMUSA — which said that mixing races in units was against Army policy at the time, even for sports teams. The team later dealt with the snub by winning the European theater's basketball championship that year, the museum said.

When three members of the unit died in a Jeep crash in early July 1945, the U.S. War Department didn't provide funds for their funerals, according to the DoD. This prompted the unit to gather its own money to perform the services to bury the fallen women in Normandy American Cemetery in Colleville-sur-Mer, France.

"Facing both racism and sexism in a warzone, these women sorted millions of pieces of mail, closing massive mail backlogs, and ensuring service members received letters from their loved ones," said Wisconsin Rep. Gwen Moore last month. Moore sponsored the bill in the House after being contacted by the daughter of 6888th members Anna Mae Robertson.

"A Congressional Gold Medal is only fitting for these veterans who received little recognition for their service after returning home," Moore added. 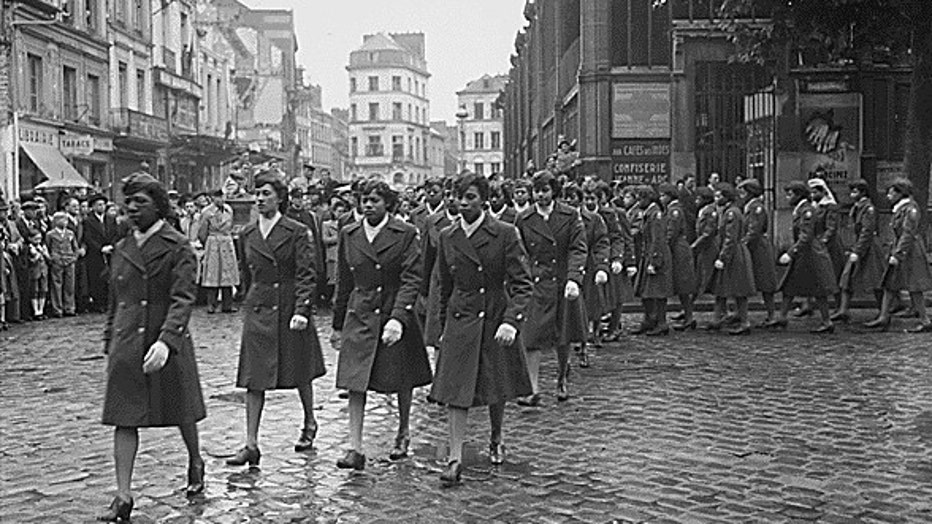 Members of the 6888th Central Postal Directory Battalion take part in a parade and ceremony on May 27, 1945, which was held in honor of Joan of Arc at the marketplace where she was burned at the stake in Rouen, France. Photo By: Army/National Archive

Eventual recognition of the 6888th

Over the years, there has been belated recognition of the unit and its achievements through exhibits, educational programs and other public events.

A monument was erected in 2018 at Fort Leavenworth, Kansas, to honor the 6888th, and the unit was given the Meritorious Unit Commendation in 2019. A documentary called "The Six Triple Eight" was also made about them. 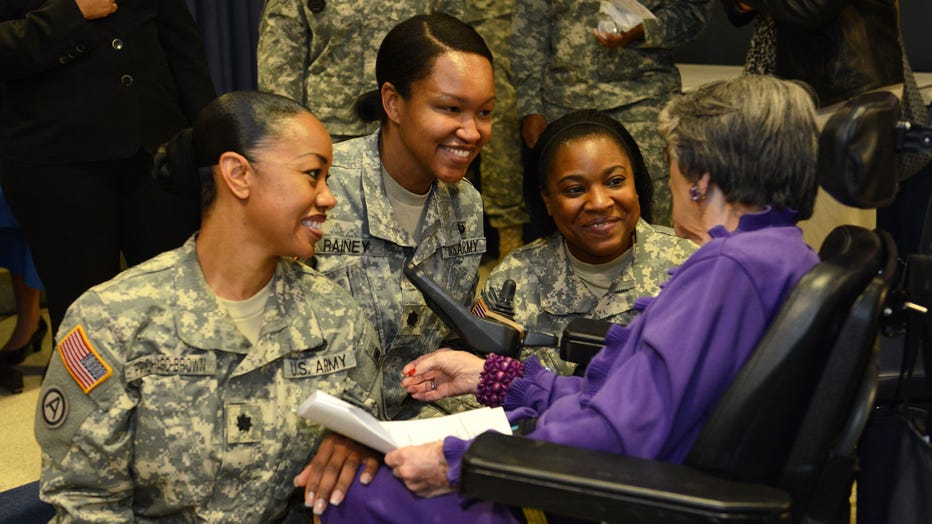 "Throughout her life and military service, Indiana Hunt-Martin experienced racism and sexism firsthand, but no amount of discrimination prevented her from serving her country," New York Democratic Rep. Brian Higgins, who sponsored the post office bill and also was a co-sponsor of the Congressional Gold Medal bill, said in a statement. "Her courage and bravery paved the way for future generations of African American women serving in the military."

It was not yet clear when the Congressional Gold Medal ceremony would be held. While only a handful of members of the 6888th are still living to receive the medal, the DoD said it would "cement their place in World War II history."

"It’s overwhelming," Maj. Fannie Griffin McClendon, who is 101 and lives in Arizona, said last month when told of the bill being passed in Congress. "It’s something I never even thought about it. I don’t know if I can stand this."