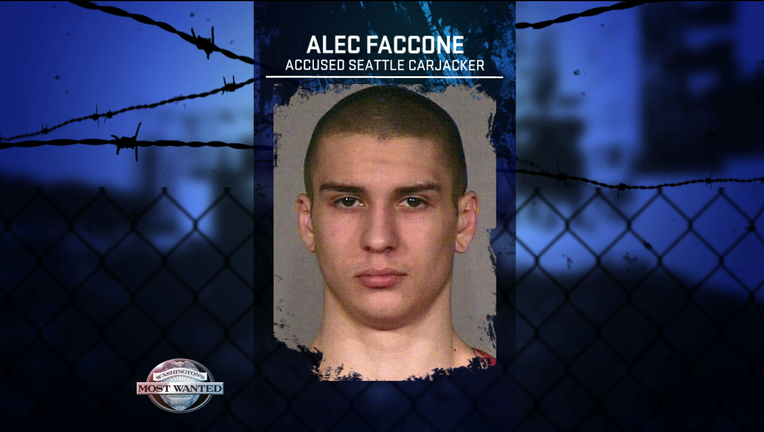 FUGITIVE CAPTURED Feb. 22, 2013 -- The Mendocino County Sheriff's Office says a woman on a trip away from home checked her computerized, live-feed video camera, and spotted a burglar inside her house last Friday. She contacted deputies, who went to the Heeser Street home and found Alec Faccone, 20, listed as a transient. The 'Mendocino Beacon' talked to Lt. Greg Van Patten, who says a search of the home turned up property suspected of being stolen from four other recent residential burglaries in Mendocino and Fort Bragg. He says Faccone broke-in, and had been living at the woman's house for a week before being arrested. As well as the alleged stolen property, deputies found guns that did not belong to the homeowner. There was a pistol with an illegal silencer, and a rifle with an illegally shortened barrel and its butt stock removed. A check of Faccone's legal history showed he was wanted in Seattle for a felony arrest warrant involving robbery, Van Patten said. Faccone was arrested on suspicion of burglary, committing a felony while armed and for having the illegally modified guns. Deputies booked him into the Mendocino County Jail in lieu of 200,000 bail. He remained a suspect in other recent area burglaries, Van Patten said. WANTED IN KING COUNTY Feb. 8, 2013 -- A Seattle man arrested for allegedly pushing an elderly, disabled woman to the ground, stealing her car and then nearly running over her is on the loose again. Police arrested the man a week after they said he and an accomplice mugged the woman as she was putting her walker in the back seat of her car, near Minor and Seneca. Since Alec Faccone didn't have much of a criminal history, a judge released the 20-year-old on his own personal recognizance. The problem now is that he hasn't been seen since. "This guy’s out on the street? He’s a guy that picks on disabled elderly women? This guy needs to be arrested,” retired detective Myrle Carner, Crime Stoppers of Puget Sound, said. Since he disappeared, a judge has issued $50,000 warrant for his arrest. Not even Faccone’s dad -- who turned him in originally -- has heard from him. If you know where Alec Faccone is call Crime Stoppers at 1-800-222-TIPS. Text a tip here.