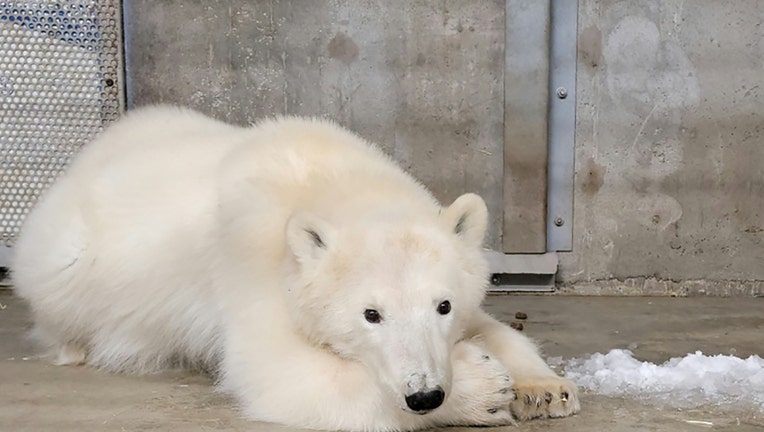 An orphaned polar bear cub roaming Prudhoe Bay that was captured and brought to the Alaska Zoo for its welfare. (Credit: Alaska Zoo)

ANCHORAGE, Alaska - An orphaned polar bear, found roaming alone in the Prudhoe Bay area of Alaska, has been taken in by the Alaska Zoo.

The U.S. Fish and Wildlife Service said it was notified about the lone bear in late November. A team of biologists was sent to the area and made the difficult and rare decision to remove the approximately 10 to 11-month-old male bear from the wild population.

Officials said the decision was made because the bear was getting comfortable around people, raising concerns about possible human-bear conflicts.

"The decision to remove this bear from the wild was not made lightly," Service Polar Bear Program Lead David Gustine said in a news release. "Removing a bear is not a good outcome for the individual or the wild population, but we felt it was the best course of action in this situation."

The Alaska Zoo said the bear is in fair to good condition although he is a little underweight and had some lacerations to his upper lip.

However, zookeepers said the bear will not be on display for the public until the animal is deemed completely healthy.

"Our primary concern is for the wellbeing of the cub," Alaska Zoo Executive Director Patrick Lampi said. "It had been observed eating a fox, lacerations on its upper lip are likely from that activity. With rabies in fox prevalent in the Prudhoe Bay area, we have special extended quarantine procedures in place for this cub."

Officials said polar bears can stay in the wild with their mothers for up to 2.5 years.

The last time the Service removed a polar bear from the wild was in 2013. A male cub, named Kali, was orphaned in Point Lay. He was taken to the Alaska Zoo before going to his permanent home at the Saint Louis Zoo.